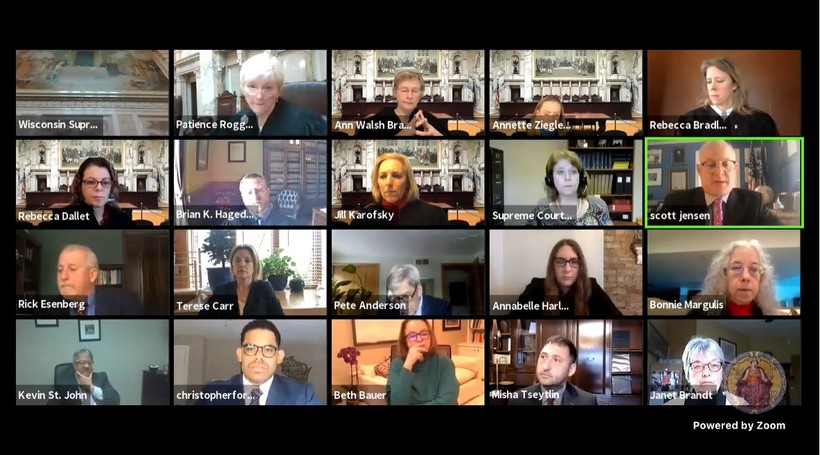 The conservative chief justice of the Wisconsin Supreme Court signaled Thursday she was wary of a Republican-backed plan that would give the court more power over the next round of redistricting.

The petition, which was filed by the Wisconsin Institute for Law and Liberty (WILL), would send all state redistricting lawsuits directly to the Wisconsin Supreme Court, opening the door for justices to draw their own maps in the process.

Minutes after a hearing on the proposal began, Chief Justice Patience Roggensack interrupted WILL president and general counsel Rick Esenberg, telling Esenberg the court was not set up for map-drawing.

"Counsel, we do cases and controversies," Roggensack said. "What your rule does is it permits this court to draw the lines."

WILL filed the petition in June, beginning a legal fight that could last years and take myriad twists and turns before it's resolved.

States redraw their legislative boundaries every 10 years following the release of U.S. Census data, a process designed to keep districts roughly equal in population. But who draws the maps — and which courts hear them — could go a long way toward deciding who holds power in Wisconsin beginning with the 2022 election and extending for a decade beyond.

Republicans controlled both the Legislature and the governor's office during the last round of redistricting in 2011, which let them draw district lines that gave their candidates a political edge over the past decade.

WILL's petition argues because the Republican-controlled Legislature and Democratic Gov. Tony Evers are unlikely to agree on a new redistricting plan, the Wisconsin Supreme Court should be ready to handle any lawsuits that are all but certain to be filed.

But WILL's petition would let the Legislature, governor or a state political party file a lawsuit with the court as soon as census data is released rather than waiting until after a new map is drawn.

Roggensack told Esenberg that the Wisconsin Constitution gave the responsibility for redistricting to the Legislature.

"It doesn't say anything in there about giving responsibility to the courts and drawing maps," Roggensack said.

Beyond constitutional concerns, Roggensack also raised practical issues, suggesting even if it wanted to, the court was ill-equipped to handle the intensive map-drawing process.

"Drawing maps would take a huge staff. We don't have them," Roggensack said. "I don't know how in the world you think the court could ever draw the maps."

Esenberg told Roggensack the Legislature and governor would still be given the chance to agree to a map while a redistricting lawsuit was pending.

"This court is not going to act as a cartographer and start from scratch," Esenberg said.

Federal courts have played a much bigger role in Wisconsin's most recent redistricting battles. In 2012, a three-judge federal panel ordered parts of two Milwaukee Assembly districts redrawn. In 2016, a federal panel ruled the entire GOP redistricting plan unconstitutional before the U.S. Supreme Court remanded the case.

New rule or not, there would likely be nothing preventing the Wisconsin Supreme Court from hearing a redistricting lawsuit through the usual channels of the state court system. The question is how quickly it would get there and how much leeway the court would have to draw its own lines once a case arrives.

"What you're asking for is just to be able to rocket docket these cases immediately to this court," said Justice Jill Karofsky, one of court's liberals.

While the process suggested by WILL would be new, the idea that the Wisconsin Supreme Court should be more prepared for redistricting lawsuits dates back almost 20 years to a previous round of redistricting.

In 2002, the court declined to rule on a redistricting case in state court because justices said they were not set up to handle such disputes.

Former Republican Assembly Speaker Scott Jensen, who was one of the parties to that case, joined with WILL to bring this latest petition, framing the move as carrying out the court's wishes from two decades ago.

"The only reason the court didn't draw these maps in 2002 was because time was running out," Jensen said.

Justices considered setting up a new process for state redistricting lawsuits in the years after Jensen's original case, but they ultimately walked away from that idea in 2009, voting 4-3 to keep the system as it is. Roggensack and fellow conservative Justice Annette Ziegler were among those on the court in 2009 who voted against setting up a new redistricting process.

At Thursday's hearing, the vast majority of those who testified spoke out against such a move, suggesting it would further politicize the court at a time when the public needs to trust the judicial system.

"Rather than just review the redistricting process, the court would be a player in the game," said Annabelle Harless, an attorney for the Campaign Legal Center, a national group that was instrumental in the 2016 U.S. Supreme Court challenge to Wisconsin's redistricting plan.

While he can't force the Legislature's hand, Evers has tried to put his own stamp on the redistricting process this time around, forming a "People's Maps Commission" to hold hearings and draw their own plan, with a focus on drawing competitive districts.

The chair of that group, Christopher Ford, told justices that WILL's plan was a "thinly veiled effort" to derail the commission.

"Our work and our process deserves a chance to be completed," Ford told justices. "This court should deny the petition because it seeks to use the court as a political tool."

But while that opposition was telegraphed in dozens of written objections with the court, it was less clear until Thursday how the justices might receive the plan.

Conservatives hold a 4-3 majority on the Wisconsin Supreme Court, although that majority has proven tenuous in a handful of recent high-profile cases. Justice Brian Hagedorn, who was former Republican Gov. Scott Walker's chief legal counsel during the last round of redistricting, has been the pivotal swing vote.

While justices did not vote on the proposal, Roggensack made clear repeatedly that the idea, at the very least, gave her pause.

"This rule makes the court proactive," Roggensack said. "That’s just not how we operate."