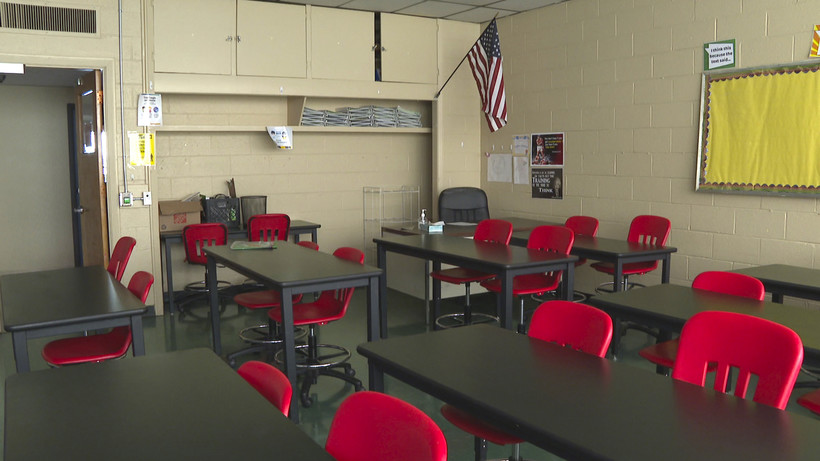 In this image made from video, an empty classroom is shown at David Ellis Academy in Detroit, Monday, Feb. 8, 2021. It's coming up on a year since most of the students at the pre-K through 8th grade public charter school last had an in-person school day. Mike Householder/AP Photo

New estimates show Wisconsin could lose $2.3 billion in federal coronavirus support for schools if Republican lawmakers don’t change their plan for school spending in the next two-year state budget.

Initial estimates put the amount of jeopardized funding at $1.5 billion, the amount set aside for Wisconsin public schools in the March American Rescue Plan Act, but a Wednesday memo from the Legislative Fiscal Bureau notes that the Republican plan would likely not meet the maintenance of effort requirements for either the American Rescue Plan or the December Consolidated Appropriations Act, which together total around $2.3 billion.

It's not unusual for federal or state bills to include a maintenance of effort requirement — states also need to spend a certain amount to qualify for federal funding for Temporary Assistance to Needy Families programs, for example. The provisions help ensure that an infusion of federal cash would "supplement, not supplant" state-level funding, said Wisconsin Association of School Boards legislative director Dan Rossmiller, and are a tool lawmakers are familiar with at the state level.

"Just yesterday, our state Legislature passed a bill that would reduce state payments to municipalities that reduce their police department budgets," he said. "They're saying, you can't cut your police department budgets, you have to maintain the level of spending that you had previously, or we're going to take the money away from you — the same concept at work in the stimulus bill."

In the case of federal coronavirus relief funds, according to the Legislative Fiscal Bureau's assessment, Republicans' plan looks like it will be sufficient for Wisconsin to pull down the first round of funding, from the March 2020 CARES Act. To be eligible for the Consolidated Appropriations Act funding, the proportion of state spending put toward K-12 and higher education in 2021-22 has to be at the same level or higher than the average allocation in 2016-17, 2017-18 and 2018-19. To be eligible for the American Rescue Plan funds, Wisconsin has to spend the same or a higher proportion of the state budget in both 2021-22 and 2022-23 as it did, on average, those three years.

"I do suspect that at the end of the day, the Republicans will come to their senses, they will make sure that they properly fund K-12 education, and we'll get that money," Sen. Jon Erpenbach, D-West Point, said Thursday. "If we don't, they have to go home and explain to all the administrators, all the teachers, all the families of kids that go to these schools why they weren't good enough for $2.3 million.”

Republicans said they're working to address the issue, and to meet the maintenance of effort requirements, but didn't have specifics on the plan Thursday.

"We have a variety of options, and I think that we will, as I've said in the past, address that issue as we work through the budget process," said Rep. Mark Born, R-Beaver Dam. "We certainly will take the actions necessary to make sure that we're able to meet the needs of the (maintenance of effort) and that funding will be available."

Although the biggest pot of money in the federal relief packages is designated for public schools, failing to meet the minimum education spending threshold would put $151.4 million for private schools at risk.

"It reminds me of a football player who's running toward the goal line, going to score a touchdown and celebrates too early, spikes the bowl before crossing the goal line," said Rossmiller of the Republican plan falling short of the maintenance of effort. "There's a step that they've forgotten, and that is that you have to maintain school spending, you have to cross the goal line while in possession of the football to get a touchdown."