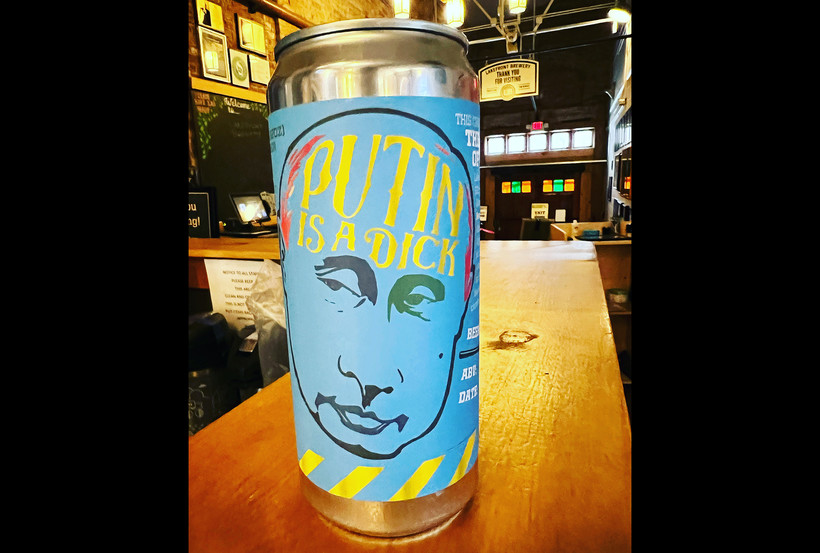 Milwaukee’s Lakefront Brewery is selling 32-ounce take-home crowlers that come with a new label featuring Russian President Vladimir Putin. The words, "Putin is a dick" are scrawled across the autocrat’s forehead while a tank takes aim at his head. Photo courtesy of Lakefront Brewery

Leave it to Wisconsinites to fight autocracy one can of beer at a time.

Starting this weekend, Milwaukee’s Lakefront Brewery is selling 32-ounce take-home crowlers that come with a new label featuring Russian President Vladimir Putin. The words, "Putin is a dick" are scrawled across the autocrat’s forehead while a tank takes aim at his head.

"It seems to be a popular theme around the world," said Lakefront Brewery Brand Manager Michael Stodola, who designed the label.

The aluminum crowlers cost about $15 each, depending on your choice of beer, and Lakefront will donate $10 from each can to the National Bank of Ukraine’s fund for refugees. With their run of 1,000 labels they’re expecting to raise $10,000.

"It's just a great, easy way for us to bring awareness to a cause and then, you know, do something about it," Stodola said.

The labels were inspired by a similarly-named beer from Ukraine’s Pravda Brewery in Lviv. Lakefront sells their beer at Pravda and the two breweries have collaborated on beers in the past, including the popular "Putin khuylo," which translates roughly to "Putin is a dickhead."

As the war intensifies, Pravda has started making Molotov cocktails and Ukrainians are lobbing the insult "Putin khuylo" at invading Russian forces.

While the exact origin of the phrase is debated — some point to a 2014 soccer match — it seems to capture a common global sentiment.

From a vandalized wax statue in Paris to Turkish soccer chants, viral memes and Twitter hashtags, people around the world are directing their anger about the war in Ukraine specifically at Putin.

University of Wisconsin-Madison political science professor Yoshiko Herrera said there is a good reason for this.

"There is a kind of moral clarity in this conflict that there isn't always in other conflicts. Nobody is looking at it saying, 'Maybe it's Ukraine's fault.' You know, people are seriously questioning why Putin did it. But there's no question that Russia is the aggressor here, and so I think it makes it easy to blame Russia and blame Putin in particular," Herrera said.

After nearly 20 years in power, Putin has come to symbolize, for many, the struggle between autocracy and democracy. But while he has become a clear target for much of the world, he still holds a veil over the eyes of his own citizens, Herrera said.

"He has a pretty firm grip right now on Russia," Herrera said. "He's arresting people who oppose him. He's shutting down media outlets. He is not allowing people in Russia to even use the word 'war.'"

Putin’s base of support is largely small towns and rural areas where people only have access to state-run media. They have been told — and many believe — that Russia’s attack on Ukraine is nothing but a military exercise. They aren’t seeing footage of refugees and bomb attacks. Even Russian soldiers were unprepared for the level of violence wrought on Ukraine.

But Herrera said the speed and scale of sanctions from the international community are causing unprecedented damage to the Russian economy. The Ruble has plummeted in value, leaving the country with crippling inflation. They’re facing central bank sanctions, canceled flights and bans from nearly every sports competition.

"It’s going to make it much harder for the regime to just say, 'Oh, you know, everything's fine. Don't worry,'" Herrera said. "There's a pile of things to lie about that is growing."

She said the level of anti-Putin protest within Russia is still relatively low, but discontent is growing and there are fissures forming. Russian citizens, especially in larger cities, are slowly turning away from anti-American propaganda and protesting the increasingly brutal war.

"We're really seeing the new challenges that leaders face in conducting foreign policy and military actions in an age of social media," Barrington said. "This role of social media in exposing when Russia is saying it's not doing something that in fact, yes, they are doing that."

Barrington said this is especially true when leaders are engaging in oppressive activities. Ukrainians and their many allies are taking to social media not only to spread the message that "Putin is a dick," but to counter Russian propaganda and misinformation about the war.

"The Ukrainian people themselves have been amazing in their understanding of the need to document and publish, in real time, things that are going on and how important that has been in making their case and telling their story," Barrington said.

And he said the world has latched onto this compelling "David and Goliath story" in which a seemingly outmatched Ukraine is doing better than anyone expected against a large Russian army and Ukrainian President Volodymyr Zelensky has come to represent the "anti-Putin."

But, Barrington cautions, tidy narratives that circulate on social media can sometimes be reductive.

"This is not a made-for-TV movie. This is going to be really brutal, really horrible, and a lot of people are going to die in the short run. And maybe for quite a while."

And cornering Putin could prove even more disastrous, especially because nothing has gone the way he expected.

He didn’t expect Ukraine to fight back. He didn’t expect such robust sanctions. And he never expected such a united response from Europe and nearly universal condemnation from the rest of the world, both Barrington and Herrera said.

"What's unusual is how quickly everyone has turned on Putin not only worldwide, but even in the U.S. across partisan lines," Herrera said. "I mean, look at the State of the Union where Biden got a bipartisan standing ovation in his remarks against Putin."

And whether it's said on a beer label or in a press statement, Democrats and Republicans in the United States may have finally found something they can agree on: "Putin is a dick."