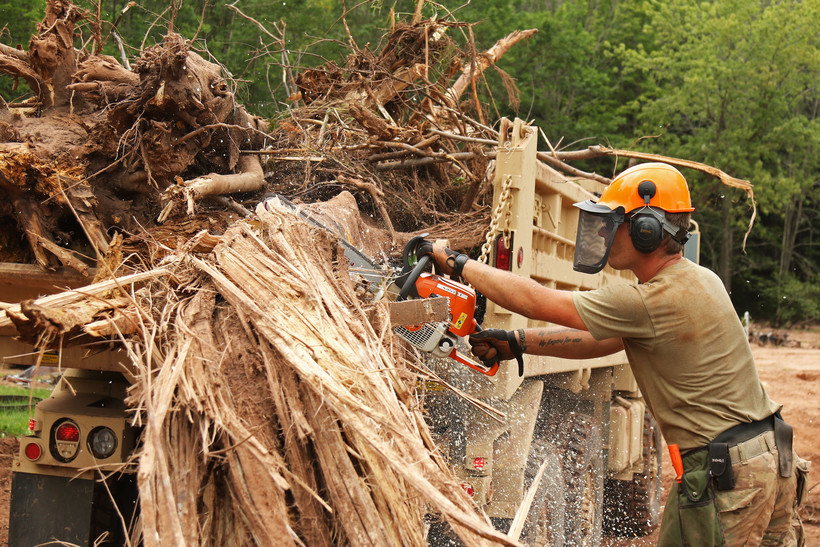 Wisconsin Emergency Management said that as of midday Thursday, only about 7,000 customers were still without power.

"That number is dropping rapidly," WEM spokesman Andrew Beckett said. "And hopefully by the end of this week, most people in the state will have power restored."

State, county and tribal officials are beginning to assess damage, while work crews remove trees and other debris from roads and public areas.

A report from the Wisconsin Department of Military Affairs Wednesday pegged preliminary damage to the public sector at $1.9 million, but also noted many counties have not yet reported damages to the state.

"Many counties are still very much focused on the cleanup phase," Beckett said. "But they will be working to collect damage estimates."

The Wisconsin National Guard is deploying approximately 50 soldiers and airmen to Polk and Barron counties to assess damage and clean up debris.

National Guard Capt. Joe Trovato said they're looking to clear downed trees and other material from roads and infrastructure as quickly as possible.

"Based off of what we've been hearing from people on the ground, you're talking about full pine plantations that were basically just sheared off by these straight-line winds," he said. "There's a lot of debris."

About 25 Guard members were in Langlade County earlier this week to assist residents and civilian authorities.

Beckett said many communities are making heavy equipment available to move the largest debris, "and working to make sure that residents know what to do with that debris as they get it cleaned up."

Hilary Markin with the Chequamegon-Nicolet National Forest said storms have continued to roll through the area, and that has led to more debris.

Crews are "cutting our way in, and we're having to cut our way out, because trees are falling," Markin said. "We're really encouraging visitors to maybe find another area of the national forest to recreate on this weekend, because it's a very dynamic situation."

The National Weather Service says 16 confirmed tornadoes touched down in the state between last Thursday and Saturday.