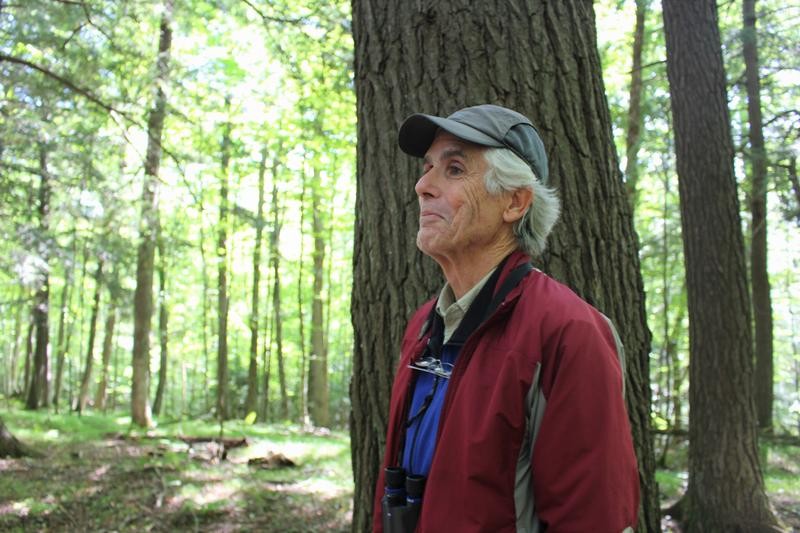 Naturalist John Bates spent years traveling around Wisconsin hunting down old-growth forest to find "the best of the best." Then he self-published a book about everything he had learned. He is pictured here in the Germain Hemlocks State Natural Area in Harshaw. Mackenzie Martin/WXPR

When someone lives to be 100 years old, everyone asks them for the secrets to their longevity.

Trees, on the other hand, live to be hundreds and hundreds of years old. How do they survive?

Reporter Mackenzie Martin headed to an old-growth forest with naturalist John Bates to learn more and answer this Curious North question from Coyote Herron in Three Lakes: Are there any old-growth sections or oldest trees known in the area that are secreted away that the general public doesn’t know about?

When this question came in, Martin immediately thought of John Bates in Mercer, a naturalist and author of "Our Living Ancestors: The History and Ecology of Old-growth Forests in Wisconsin (And Where to Find Them)," a book he self-published last year.

"Most people do not know about the Germain Hemlocks," he said. "This is an 88-acre site named after Cliff Germain ... the first coordinator of the State Natural Areas Program."

Bates lists this site in his book as one of the 50 best old-growth sites in Wisconsin. Other favorites of his in Oneida County are the Enterprise Hemlocks, Holmboe Conifer Forest and the Kemp Woods. 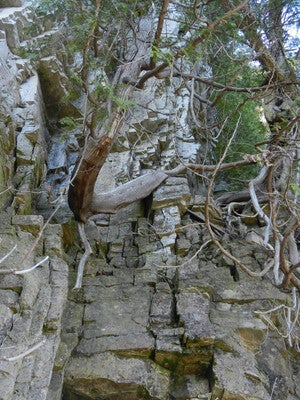 White cedars jutting out of a cliff at Peninsula State Park in Door County, Wisconsin. Photo Courtesy of John Bates and WXPR

As to where you can find some of the oldest trees? Limited sampling has been done on sections in Wisconsin, but growing out of the sides of cliffs on the Niagara Escarpment are bonsai-like white cedars that were found to be over 1,000 years old and just an inch in diameter.

In addition to being a map to the best old-growth in the state, Bates’ book is also a rumination on the history of our forests and why they're worth protecting.

A lot of the sites he lists are state natural areas, but others he tracked down in other ways. Sometimes he followed up on tips people sent him, but those often ended up as dead ends, partly because there’s a sliding scale on what old-growth forest really is.

"How old does a tree have to be to be considered old-growth?" Bates asked. "A white pine can live 400 years, but we consider white pine old-growth at 120 to 150 years old. That’s barely middle age ... On the other hand, we have species that are sun lovers and short-lived, like our aspens, poplar trees ... they only live to be 80, maybe 100 years old, so if you’ve got an 80-year-old aspen, that’s really old-growth."

That being said, one old tree does not an old growth forest make.

"You can go into Rhinelander to Pioneer Park, and there are some big 'ol pines in there. Is that an old-growth forest?" he asked. "Heck no! It’s all Kentucky bluegrass underneath there and picnic tables."

Old-growth forests require a thriving ecosystem. The percentage of them in Wisconsin is pretty small, just 0.2 percent of Wisconsin forests.

"In the 15 years that I spent researching this book, wandering all around the state, I couldn’t find one square mile of true remnant old-growth forest left in the entire state," Bates said. "We were that thorough in our cutting of these old forests."

He doesn’t blame the people who cut them down, though. He said if he was an immigrant coming here in 1890, he would’ve done the same thing.

When Martin and Bates walked by an especially patchy part of the forest, their conversation turned to the importance of death for a healthy old-growth forest.

"An old-growth stand is not supposed to be all old trees," Bates said. "It’s supposed to be a third or fourth growing younger trees based on trees getting old and dying or snapping off in a windstorm." 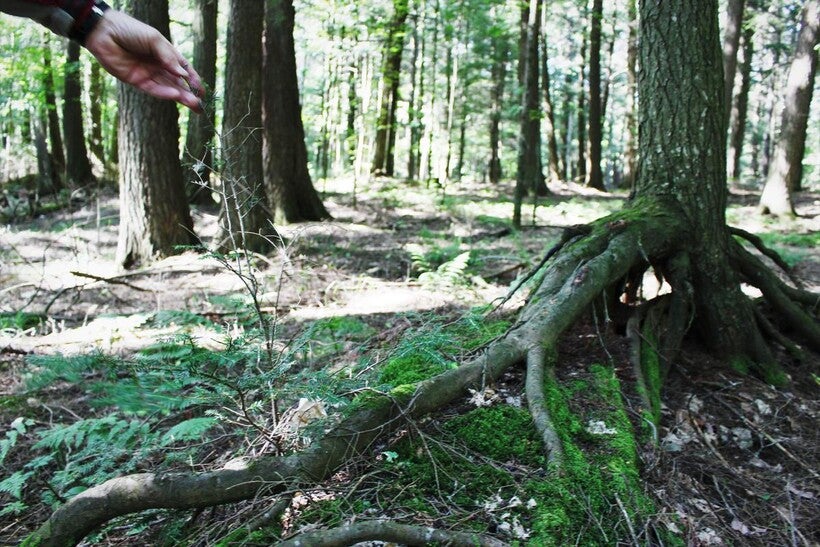 An example of both a nurse log and stilt tree, found at the Germain Hemlocks State Natural Area in Harshaw. Mackenzie Martin/WXPR

Take a hemlock, for example. It takes roughly 200 years for a hemlock to decompose. In the process of decomposing, it gets covered in moss, which provides a moist base for hemlock seeds to get started. This helps protect them, even if there is dry weather.

"So in these old-growth forests, what you do is you look for a straight lines of trees, and you’ll see them frequently," Bates said. "It's where the trees all got started on some sort of big grandmother tree that fell over and got covered in moss. The seeds all fell on what’s now called a nurse log and it nursed these seeds along. That’s how you end up with straight lines of trees."

You also end up with stilt trees, trees with exposed roots because the log they got started on decomposed beneath them.

Bates said part of the reason he spent 15 years researching old-growth forests is to help people better understand aspects like this about them, with the hope of instilling a deeper respect for them.

"I always laugh that if we could have people lay down in the woods in a nice wind ... under some big pines and just listen to that hum that goes through those trees and watch those trees sway, that the peace that would be encountered would put a lot of psychiatrists out of work," Bates said.

To find the best old-growth forest near you, you can check out John Bates’ book, "Our Living Ancestors: The History and Ecology of Old-growth Forests in Wisconsin (And Where to Find Them)."