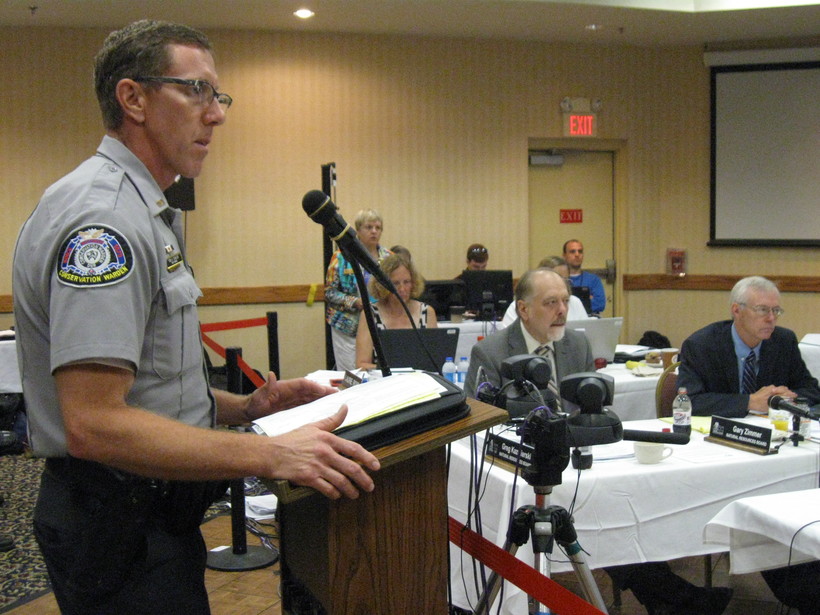 Todd Schaller, the DNR's Chief Warden in the Bureau of Law Enforcement, addresses the Natural Resources Board on a proposed rule for deer fencing at their meeting in Ashland.

About 40 Wisconsin whitetail deer farms won't have to upgrade their fencing under a rule approved by the Natural Resources Board on Wednesday. The rule applies to farms that opt out of the state’s Chronic Wasting Disease Herd Status Program.

The rule doesn’t lower deer fence standards, according to Todd Schaller, the DNR’s Chief Warden with the Bureau of Law Enforcement.

"It provides a low risk alternative for a subset of whitetail deer farms, which is consistent with standards we’ve had and maintained since 2001 and 2002," he said.

Schaller said the owners can’t move deer outside the farm unless the deer are dead, adding that herds on unmonitored farms are still tested when the animals are slaughtered or die.

Deer farms have enrolled in the program to DNR approval for a single fence. But, Whitetails of Wisconsin President Rick Vojtik said hobby deer farmers are struggling to meet new federal tagging and inventory rules.

Under the program, all whitetail deer must have two ID tags, typically by 12 months of age or when leaving the farm. In addition, a veterinarian must complete a physical inventory of all deer on the farm every three years.

"On a bigger farm and a bigger ranch, you have handling facilities," Vojtik said. "They range from $10,000 to $20,000 to set it up. So somebody raising a few animals, it’s really hard for them to meet up with that expectation."

But, conservation and tribal groups argue double-fencing is needed to protect the wild deer herd from CWD, including Mic Isham, chairman of the Great Lakes Indian Fish and Wildlife Commission.

"Heck. Put triple fences up is what we’re saying," he said.

Isham said the state has also failed to consult with tribes on efforts to prevent the spread of CWD to the wild deer herd.

Conservation groups, including the Wisconsin Wildlife Federation, are asking the state to require double-fencing, annual fence inspections and other measures to prevent the spread of CWD.

If the rule hadn’t been adopted, the Wisconsin Department of Agriculture, Trade and Consumer Protection would have required those farms to have double-fencing. Otherwise, they would be in violation of state standards.

Natural Resource Board members said CWD is a complex issue with no simple fix. Board member Preston Cole said deer farms should consider themselves "put on notice," adding that the state will use "the full breadth of the law" to protect the wild deer herd.

The DNR is currently updating its CWD management plan. DNR Deputy Secretary Kurt Thiede said they hoped to present a plan at the December board meeting. But, he said the agency would provide an updated timetable with input from various stakeholders in September.