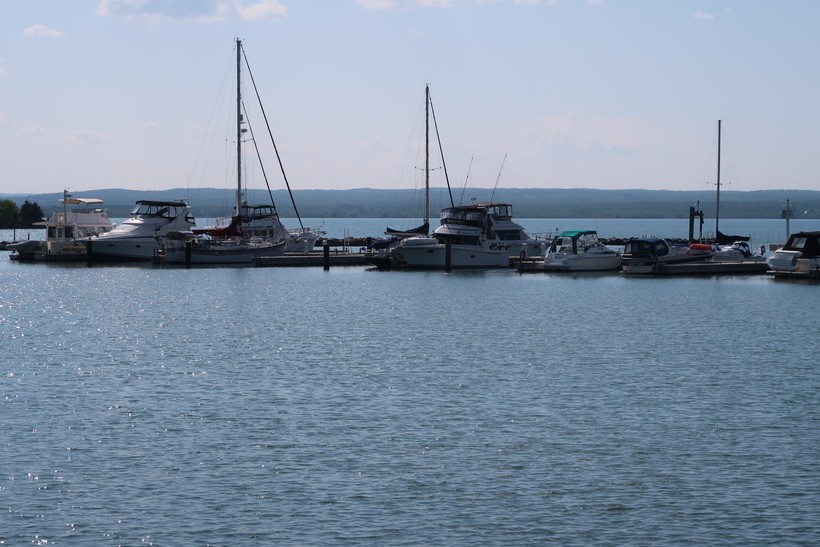 Fishing and recreational boats are docked at the Ashland marina in August 2018. Sports anglers have expressed frustration over a new fishing agreement between the state and tribes. Danielle Kaeding/WPR

The Natural Resources Board voted 5-2 to pass an emergency rule that puts into practice a new Lake Superior Fishing Agreement between two Native American tribes and the Wisconsin Department of Natural Resources.

The agreement has drawn the ire of sports anglers and board members who say they weren't included or informed as the agreement was negotiated.

The Red Cliff and Bad River Bands of Lake Superior Chippewa negotiated and signed a new agreement in December with the DNR for management of the Lake Superior fishery. The last 10-year agreement expired in 2015, but state officials and tribes have been operating under extensions of the agreement.

The emergency rule lasts 150 days, after which a permanent rule, that reflects the details of the agreement, goes into place.

One of the aspects of the new agreement that has upset sport anglers is a new commercial whitefish season that will be held for three weeks during October.

The board amended the emergency rule on Wednesday to prevent state commercial anglers from taking part in the October season until more data can be obtained to ensure the season would not harm or put more pressure on the Lake Superior fishery.

Officials with the DNR and tribes have said the new agreement preserves and protects the Lake Superior fishery. However, sport fishermen and women say the new agreement was reached in secret, doesn’t include adequate public input, or address biological concerns.

Scott Bretting, president of the Apostle Islands Sports Fishermen's Association, spoke via Skype during the meeting. He said the agreement isn't preserving the resource, but "destroying" it.

"This agreement has taken areas that are key to sportfishing only and encouraged to destroy it with commercial fishing with indiscriminate gill netting," Bretting said.

Bretting and others voiced concern that the agreement puts pressure on near-shore spawning areas and will discourage sports anglers from fishing in the region. He expressed worries over whether people would continue to come to the region to sportfish and how that may impact the Ashland area economy.

George Meyer, executive director of the Wisconsin Wildlife Federation, said they respect the treaty rights of the Red Cliff and Bad River tribes. However, he said sportfishing opportunities have declined during present and past negotiations, noting there will be "significant" impacts to state sport anglers.

"The horse is out of the barn. The fishing agreement is signed," said Meyer. "You all can’t do anything about it."

Brad Ray, Lake Superior fisheries biologist with the DNR, told board members that they monitor commercial boats and regularly exchange data with the tribes. He noted that he's met with them about holding more frequent meetings to maintain the sustainability of the resource under the agreement.

"We do plan to continue to monitor the impacts through our existing surveys," Ray said.

Ray added they have metrics to oversee whether problems occur under the agreement. He noted the agreement has tasked the DNR with developing a population model for whitefish. He said they also do assessments of various fish.

Ray said bycatch, or fish that are caught incidentally while fishing for other species, is about 5 percent, which equates to about 1,100 fish each year.

"There is some bycatch, and we recognize that," he said.

There are more than 300,000 acres of refuges that protect fish from commercial and recreational fishing that provide high-quality spawning habitat for fish, Ray said.

Board member Terry Hilgenberg said the board would not be intimidated by the threat of litigation over the agreement. It's unclear who would bring a lawsuit over the agreement. Although, Bretting with the Apostle Islands Sports Fishermen's Association, has previously said they're exploring all options and have not ruled out a lawsuit.

"I would certainly hope the record is clear that on future negotiations and future agreements that we do a better job," Hilgenberg said.

Dr. Fred Prehn, chairman of the Natural Resources Board, said he’s been assured by the DNR that it will approach the process for reaching an agreement differently next time. Still, Prehn joined board member Greg Kazmierski in voting against the emergency rule.

He acknowledged anglers' concerns that commercial fishing with gill nets in the Chequamegon Bay would push sport anglers further out into the lake, posing safety concerns.

"What's a big concern for me is the safety of small boats," Prehn said. "A lot of us with 16-,17-,18-foot boats head off from the shoreline to fish that beautiful bay. You go past Madeline (Island) up into the outer islands and you are taking some chances."

Because the agreement has already been signed, there is little the board can do to change course.

While the emergency rule and subsequent permanent rule put the agreement into effect, the Natural Resources Board said it wanted tribes and the DNR to meet if any negative impacts occur to the fishery as a result of the agreement.

During the next 150 days, Prehn said he'd like the board to be informed what impact the emergency rule is having. Also, before the DNR brings a permanent rule to the board, Prehn said he wanted assurances that if there are adverse impacts to the Lake Superior fishery during the 150 days, that the department and tribes will meet to discuss the impact of those actions.

DNR Secretary Preston Cole made a commitment to the board to make sure the chair of the Natural Resources Board is engaged regularly in ongoing negotiations.

"You have my commitment that we will over-excel in terms of our communication strategy to the board when these things occur," Cole said.