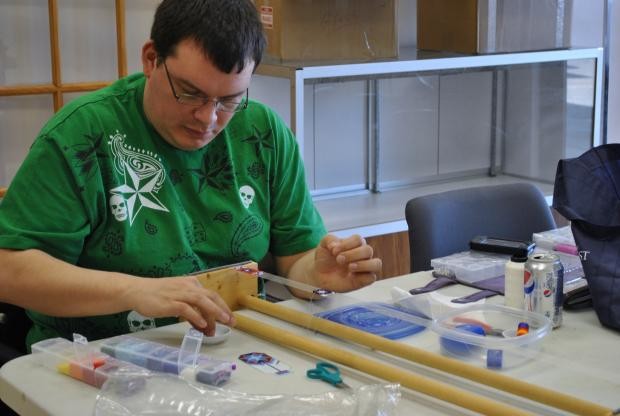 One 'Winkte' Talks About Role Of LGBT People In Lakota Culture
By Galen Druke
Share:

Don’t ask Isaiah Brokenleg what his coming-out experience was like; His was a “coming-in” experience.

“Coming in is more about realizing that you are in this role as a Winkte, learning about what that role means, and then coming into your community to fulfill your social and spiritual responsibility,” said Brokenleg.

“Winkte,” in the Lakota language, literally means “a male-bodied person who speaks like a woman.” It refers to what most North Americans would call gay or transgender people. Traditionally, Winkte take on special spiritual or leadership roles, like naming young children, resolving disputes or praying for the sick.

While Winkte is a Lakota word, these kinds of leaders exist within Native American communities across the continent. In English, they are often referred to as “two-spirit people.”

According to Brokenleg — who himself is a member of the Rosebud Sioux Tribe, a branch of the Lakota people — the term comes from the idea of a person walking between two worlds: masculine and feminine, natural and supernatural.

“I think a lot of times, they were the healers and the counselors of the community because they could understand these different perspectives,” said Brokenleg. “Often, they were used as the translators or people who helped to build conciliation when there was conflict.”

Although Winkte serve an important role in his community, he said that it’s not meant to be a position of power.

“It’s really more of a servant leadership,” said Isaiah. “So, if someone asks you to pray for them, if they ask you to come be an MC at an event, that’s your responsibility to come and do that.”

His family began preparing him to come into his role from a young age.

“I was raised by my grandparents,” said Brokenleg. “They told me stories about how Winkte were to behave and act. I thought they told all my cousins these stories, but they only told them one or two stories and I got told many stories. That’s what ended up helping me in my process.”

While his grandparents encouraged him, he hasn’t always been supported within the Native American community. His father kicked him out of the house when he discovered Brokenleg was gay. He blames the homophobia that exists in the community largely on the influence of Western European colonization.

“I think with boarding schools, and a lot of the colonization and historical trauma, there’s also (now) homophobia that exists in Indian country, too,” said Brokenleg. “So, I think for a long time, some of those things were suppressed in our culture along with many of our language and cultural rights.”

“The LGBT community often is a microcosm of the larger community, so there is racism and sexism and all of those things,” he said. “In the gay community, I feel like I can only be gay. I can’t be gay and Indian … For many people, I think the LGBT community is the white male LGBT community and (that) doesn’t always allow other folks into it.”

Brokenleg said he has trouble relating to the current national debate over same-sex marriage that has been a significant rallying point within the LGBT community. In his mind, “traditional marriage” includes couples of the same sex, who may or may not even be considered gay by Western standards.

“People always say (traditional) marriage is between a man and a woman… and I laugh when I hear that, because traditionally in my community, and many other communities, we had what you would call gay marriage way back before colonization ever came. It’s traditional in North America, whether you like it or not,” said Brokenleg.

Brokenleg acknowledges that this way of looking a gender and sexuality might be attractive to some members of the broader LGBT community, but he discourages them from mimicking it. He said he thinks people need to work within their own cultures, and not co-opt others.

“I always tell people to look in your own community, because in almost every indigenous culture that I know of there is a role for these folks,” he said. “That role exists for everyone.”