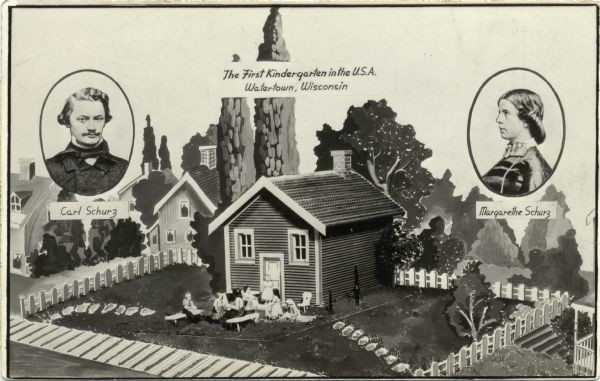 Artist's rendering of an elevated view of the first kindergarten with children and a teacher gathered in front of the building. There are inset portraits of Carl Schurz and Margarethe Schurz on the sides of the postcard.

Nation's First Kindergarten Was In Wisconsin 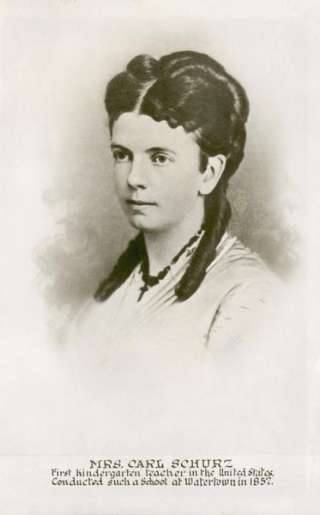 Friday is National Kindergarten Day, a day honoring the birthday of German educator Friedrich Wilhelm August Froebel who created the concept of kindergarten.

Froebel’s student, Margarethe Meyer Schurz, brought the idea to Wisconsin where she founded the first kindergarten in the nation in 1856.

Meyer Schurz was born into a socially progressive family in Hamburg, Germany, in 1832. She and her older sister Bertha fell in love with the idea of kindergartens after hearing Froebel lecture in Hamburg.

The German Revolution forced many German intellectuals to flee in 1848, including Bertha and her husband. They settled in London and opened a kindergarten.

Margarethe came over to help with the school in 1851. She also met her soon-to-be husband, Carl Schurz, in London.

The Schurzes set off for America in the summer of 1852, settling first in Pennsylvania and then in Watertown, Wisconsin, in 1856 where Carl had relatives.

Margarethe opened her German language kindergarten in her living room in 1856. Even with only five students, the noise proved too much for Carl, so she moved her class to a small building closer to the center of town.

Margarethe remained in charge of the school until 1858 when the Schurzes moved to Milwaukee for Carl’s budding political career.

In 1859, Schurz shared her kindergarten with well-known teacher Elizabeth Peabody on a trip to Boston. Peabody loved the idea, opening her own English language school in 1860 and helping to start kindergartens all over the United States.