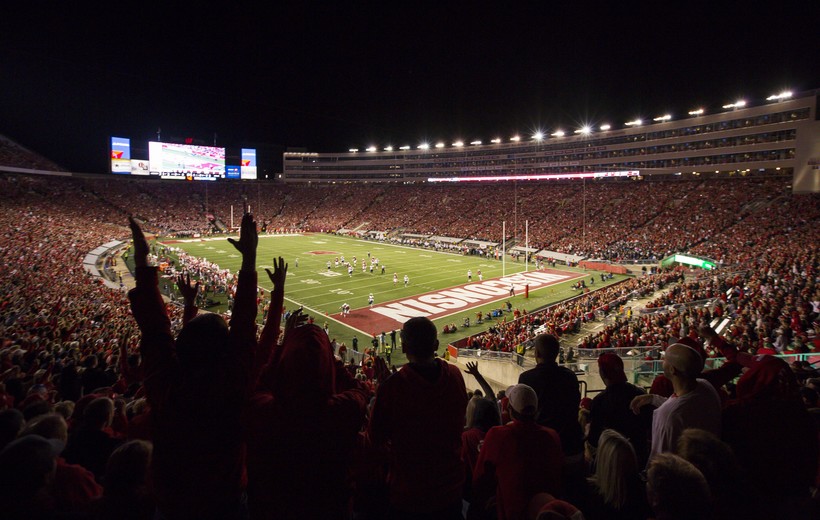 Fans celebrate after Wisconsin scored against Utah State during the second half of an NCAA college football game at Camp Randall Stadium on Friday, Sept. 1, 2017, in Madison, Wis. Andy Manis/AP Photo

With seven months until the start of the 2020 college football season, there’s still plenty of news coming out of Madison.

The Wisconsin Badgers won 10 games last year and earned a trip to the Rose Bowl in Pasadena, California, where they lost by one point to the Oregon Ducks. That marked the final game of running back Jonathan Taylor’s University of Wisconsin career. He’ll go down as one of the program’s all-time greats.

Now, the Badgers have a new running back coming to town and big games scheduled at two of America’s most storied stadiums.

Since December, Wisconsin’s football future has come into view. On National Signing Day 2020, here’s a roundup of Badgers football news.

Wisconsin Is Bringing In Its Best Recruiting Class Ever

National Signing Day doesn’t hold the same significance it once did, said Colten Bartholomew, a Badgers beat reporter at the Wisconsin State Journal. Several years ago, the NCAA added an early-signing period for football. Now, most top recruits sign their national letter of intent during those 72 hours in December. In fact, 77 percent of prospects signed early in 2019, according to 247 Sports, a website that focuses on college football and basketball recruiting.

Nineteen scholarship players signed with the Badgers in December.

As usual, the Badgers are bringing in some hotly recruited offensive lineman including Jack Nelson. The Stoughton native was recently upgraded to a five-star recruit by one of the major recruiting websites, Bartholomew said.

Bartholomew pointed out a couple of players who could start making a difference for Wisconsin in their first season.

All in all, Wisconsin can boast its highest-ranked recruiting class since the internet started keeping track in the mid-1990s, Bartholomew added.

"I think what's happening is kids are seeing that if you come to Wisconsin and are willing to put in the work, that the opportunities come a little bit quicker at Wisconsin for guys than maybe they would at some of the schools like Alabama or an Ohio State," Bartholomew said.

While the Badgers are bringing in some top talent, they’re also losing important players to graduation or the NFL Draft. Wide receiver Quintez Cephus and center Tyler Biadasz, both juniors, declared for the NFL Draft in January. As expected, Taylor is also leaving for the NFL.

"I'm proud of what we've accomplished, and I'll cherish the bonds that we've built," he said. "We're a family, and I'll always be a Badger."

One player who didn’t sign his national letter of intent during the early period is Taylor’s replacement. Running back Jalen Berger, from New Jersey, waited until January to commit to Wisconsin over the University of California, Los Angeles.

"He brings an array of skills, receiving and running the ball, that are pretty exciting," Bartholomew said.

Last week, the UW Athletic Board approved a one-year contract extension for head coach Paul Chryst. His contract now runs through January 2025. Chryst has been named Big Ten Coach of the Year twice in his five seasons with the Badgers.

"Assuming they continue winning nine, 10 games a year like they have been, I think he's going to be here for a long time," Bartholomew said.

Chryst’s guaranteed salary of $4.15 million made him the 25th highest paid college football coach in the country last season. According to the Wisconsin State Journal, Chryst and his assistants are also eligible for bonuses if the team wins 10 games or makes it to the Big Ten Championship.

It was announced earlier this month that Wisconsin will open its 2020 season against the Indiana Hoosiers with a night game at Camp Randall Stadium on Friday, Sept. 4. The Badgers’ 2020 schedule will also take them to two of the most famous stadiums in sports.

Wisconsin will face the University of Notre Dame at Lambeau Field on Saturday, Oct. 3. It’s part of a two-year, neutral-site series that will also see the teams meet at Soldier Field in Chicago in 2021.

It’ll be Wisconsin’s second game at Lambeau — the Badgers upset the LSU Tigers in Green Bay in 2016 — and the first for Notre Dame. Curly Lambeau played football for the Fighting Irish.

On Saturday Nov. 7, the Badgers will take on the Northwestern Wildcats at Wrigley Field in Chicago.