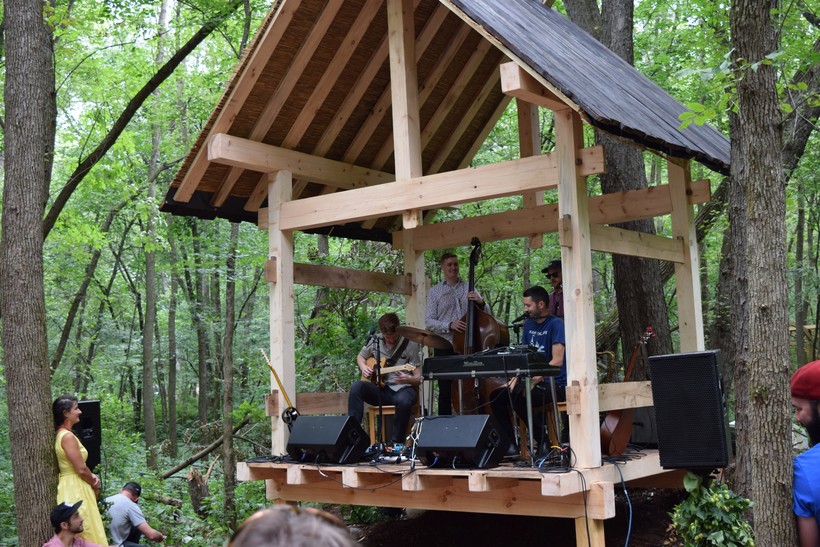 There are dozens of music festivals taking place across Wisconsin this summer. And this weekend, music fans from around the world will converge in the Chippewa Valley for the third annual Eaux Claires Music & Arts Festival.

The eclectic music festival is the brain child of Eau Claire native, Justin Vernon of Bon Iver, one of this weekend’s many headliners. He and the other festival organizers have stocked the music lineup with other big names, like Paul Simon, Wilco, Chance the Rapper, Feist and Sylvan Esso.

What makes Eaux Claires different from other music festivals is the interaction between the different artists, said Wisconsin author and humorist Michael Perry, the festival’s official narrator. "From the first time Justin (Vernon) brought this up, he said, 'Focus on collaboration. I want it to be different and erase the boundary between audience and artist as much as possible,'" Perry said.

"Fundamentally, you can only go so far. It’s interesting to observe how he and (Eaux Claires co-curator and the National member) Aaron Dessner have stuck to that."

The shows may be atypical for the artists, with less of an emphasis on cranking out the familiar hits. For example, Bon Iver will be performing with folk legend, John Prine, one of Perry’s biggest writing influences.

"John Prine was one of those roughneck, blue jean-wearing, singer-songwriter people who first suggested to me through his work that you could strive for art, beauty, and sensitivity and yet still talk and walk like the folks I grew up with," Perry said. "He lugged the U.S. Mail, for crying out loud. He knew what it was to work and yet, he loved poetry."

Paul Simon is set to perform with YMusic, a classical ensemble from New York City. Fest-goers may also see a jazz band on stage with a poet on a tiny stage in the middle of the forest. An author will read from his book while someone paints a mural.

"You have the big stages, but then all these little moments," Perry said.

In addition to the music, more than 20 art installations will be on display around the fest grounds, an idea Perry calls, "art collaborating with nature." This includes anything from a coloring wall to geometric sculptures to cricket recordings in a wooded area.

And Perry is overseeing the literary side of Eaux Claires, bringing in writers from across the country. An organist plays in a wire cathedral with the music amplified throughout the grounds at last year’s Eaux Claires festival. John K. Wilson/WPR

"On one hand, a few (of the writers) have a connection to the state and area. On the other hand, we’re amplifying voices not heard in this area," Perry said.

"I’m a guy with a hardcore, Wisconsin country boy background, and I love that and it’ll be a part of me forever. But my world has been so opened up and changed by voices from all over this country and from all different strata of society. So I took it upon myself to make sure we have Midwestern voices but also examine what is a Midwestern voice."

According to Volume One, the festival is estimated to have a $6.8 million economic impact on the region with more than 25,000 people expected to attend.

Visit Eau Claire executive director Linda John said people come to town early for the festival and stay in the area longer, even after the music ends. "Additionally, we find the geographic market for Eaux Claires to be very different from other festivals," John said. "All 50 states and dozens of countries were represented last year. International visitors stay in a destination longer and spend more money."

She said they plan on digging deeper into the numbers and figures after this year to better understand its impact.

"We are experiencing this year-round, and Eau Claire has literally found its place on the world-wide radar screen because of this event," she said. "The value of that is also extremely significant."