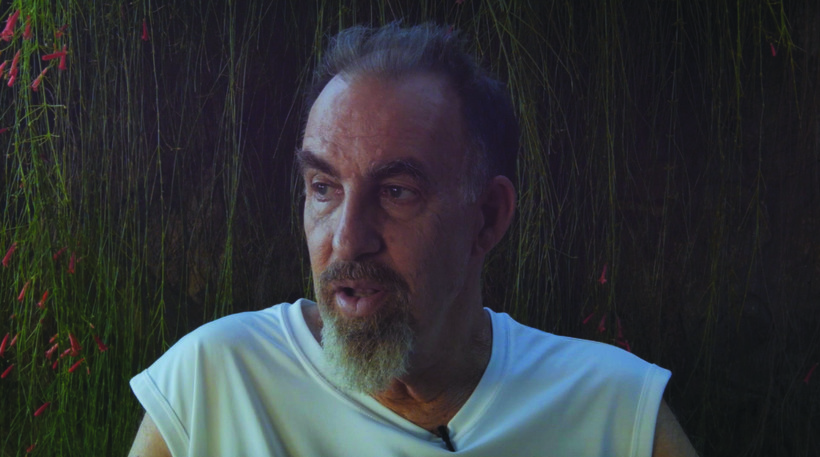 Musician. Composer. Painter. Actor. John Lurie is a man of many talents

As if that's not enough, he also does a great Leonard Cohen impression
By Doug Gordon
Share:

John Lurie had a huge impact on the world of art and culture in downtown New York during the 1980s — and beyond. As a musician, composer, artist and actor, Lurie follow his ambitions and relentless imagination to make things happen.

And he did it his way, as he explains in his new memoir, "The History of Bones."

Lurie co-founded the legendary band the Lounge Lizards. He acted in such pivotal films as "Stranger than Paradise" and "Down by Law," which led The New Yorker to call him "The Humphrey Bogart of the Eighties." (An aside: Does this mean that Humphrey Bogart is "The John Lurie of the Forties"? We're still trying to figure that out, and we'll keep you posted.)

In his memoir, he admits he never would have said this out loud to anyone, but his life goal was to find and express God through music.

"I don't know how to talk about that kind of thing," Lurie told WPR's "BETA." "One, when you mention God, that means a million different things to a million different people. And I think that this is something I could really only express through music. And to talk about it, it seems to cheapen it and make it something that it really isn't. So I'm hesitant to go there. You know, if I was Rumi or Lao Tzu, I might attempt to do it. But I'm not. I'm shy to go there."

In 1979, Lurie and his younger brother, Evan, co-founded the Lounge Lizards. The legendary rock critic Lester Bangs wrote that the band was "staking out new territory that lies somewhere west of Charles Mingus and east of Bernard Herrmann."

"Isn't that a nice thing?" Lurie said. "Lester was one of the few music critics that I actually respected. And then, to pick two of my complete heroes, that was just a nice moment. That was really nice because we were being written off as a bunch of phonies."

In 1986, the Lounge Lizards recorded a live album in Tokyo. In his book, Lurie writes that walking back to the hotel listening to "Big Heart" cranked up in his headphones was one of the happiest moments of his life.

"I don't often do that, walk around listening to music with headphones. But when you do, the place becomes modified," Lurie said. "So Tokyo is visually quite fascinating anyway, especially during a bustling time and also the ancient and modern stuff mixed together. And some guy unloading fish from a cart and then the neon lights going off. And the sound of the song overwhelmed the visual experience and it just sounded good."

The origin story behind the title track from the "Voice of Chunk" album occurred in the West African country of Ghana, where Lurie was acting in Martin Scorsese's film, "The Last Temptation of Christ."

Lurie spent a lot of time with the Ghanian musicians.

"Their music just moved me really deeply," he said. "And that call and response between the two saxophones is a nice thing but that doesn't sound Ghanaish. And then (guitarist Marc) Ribot takes a solo that's phenomenal. Night after night, he would take these amazing solos on that."

Lurie was unable to find a record label to release the "Voice of Chunk" album in 1989. So, as he writes in his memoir, he set out to "become the Boxcar Willie of jazz." Boxcar Willie was an American country singer-songwriter who adopted a hobo persona and aired late-night commercials for his album. So, Lurie decided to do the same thing.

As he writes in "The History of Bones": "This is late '89. There was no internet. This was the only way I could think of to get people the music without having the gatekeepers involved."

Lurie has said that what he might have been best at in his life was doing film scores.

"The two that I'm kind of most proud of were the "Variety" score for Bette Gordon and "Manny & Lo" for Lisa Krueger. I was proud of those because they were done for zero dollars," he said.

Lurie hired musicians off the street and gave them $75 each for the afternoon. The sessions were recorded quickly, in just a day or a day and a half.

In 1999, Lurie created an alter ego named Marvin Pontiac and recorded two albums under this name. He did this because he had accumulated all of this music over the years that wasn't quite right for the Lounge Lizards and wasn't right for a film score. It needed vocals.

"So I had to create a character so I'd have a mask to sing behind," Lurie explained."It would give me a little bit more confidence because 'John Lurie Sings!,' I just couldn't do that."

Lurie started getting quotes from people like Flea, Angelique Kidjo and Iggy Pop to bolster the idea that Marvin Pontiac was a real musician.

"Bob Dylan said he didn't give quotes and I needed somebody from that kind of demographic to say Marvin Pontiac was a big influence on me or something," he said.

In January, Lurie launched his new HBO show, "Painting with John," written, directed, and starring Lurie. The program proves that he remains a creative force.

HBO has renewed "Painting with John" for a second season.