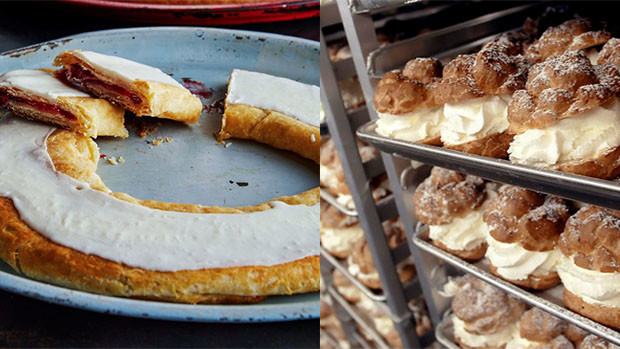 Left, Shauna Sever, author of the cookbook "Midwest Made: Big, Bold Baking from the Heartland," says kringle can be a multi-day process to make yourself. Photo by Paul Strabbing. Right, cream puffs prepared to be sold at the Wisconsin State Fair, in West Allis Wis. Darren Hauck/AP Photo

The 'most friendly debate': cream puffs vs. kringle — 2 of the state’s most popular delicacies

The state pastry and the state fair icon, 'a certain kind of delight'
By Tim Peterson
Share:

"Biting into them is just like a little piece of heaven." That’s how Paula Hare describes the most popular and longest running food item at the Wisconsin State Fair: the cream puff.

However, for Marisa Wojcik, of Madison, she wasn’t sure what all the fuss was about when she tried one for the first time. Maybe, she questioned, she just didn’t try an ideal example.

Growing up in the Eau Claire area, Wojcik has much more history, and foodie fondness, toward the kringle, which she said would regularly appear at family gatherings. 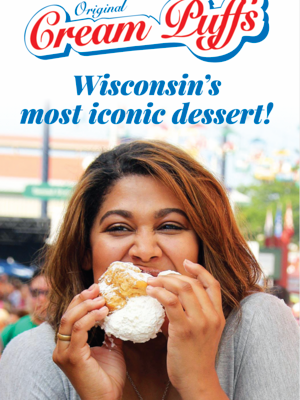 The ubiquitous kringle was crowned the state pastry by the Legislature in 2013. The cream puff? Well, its reign only lasts 11 days in Wisconsin.

That got Wojcik wondering: "Why do cream puffs get all the attention, when the kringle is the official state pastry of Wisconsin?" So, she reached out to WPR's WHYsconsin to get to the bottom of it.

Before we got too far into researching, we wanted to ask the people of Wisconsin what they thought using a friendly social media poll.

WPR and WHYsconsin followers on Twitter and Facebook had strong opinions. One person called cream puffs gross, another said they’re just a "hamburger bun with whipped cream." Others said Wisconsin ought to back the cream puff as its more iconic treat — it being America's Dairyland and all.

In a blowout Twitter poll, 10.3 percent of our 232 respondents voted "Cream puff all the way," 24.1 percent answered "I love them both," and an overwhelming 65.5 percent swore "Kringle loyalty forever."

Controversial question for you Wisconsinites:

Are you team cream puff? Team kringle? Team I love them both?@marisawojcik asked us why cream puffs get so much attention when kringle is the official state pastry. Any ideas?@centraltimewpr will have more on this 🔥🔥🔥 debate.

To dive a little deeper into answering Wojcik’s very delicious, if not controversial, question, WPR’s "Central Time" and host Rob Ferrett spoke with Shauna Sever, author of the cookbook "Midwest Made: Big, Bold Baking from the Heartland," and Paula Hare, director of marketing and media relations for Original Cream Puffs, the pop-up (perhaps puff-up?) bakery operated by the Wisconsin Baker's Association that assembles each August to bake and serve the iconic dessert to hungry state fairgoers.

"This is the most friendly debate ever," Sever said when asked to compare and contrast the competing pastries.

It was back in the late 1800s when the kringle arrived in Wisconsin, Sever said. It was a period when a wave of European immigrants were seeking new lives and bringing their food traditions with them.

The kringle, a Danish pastry, originally took the form of a pretzel, Sever said.

"Then, like so many other good baked goods, they sort of evolve as they land in their new home," she said. "Like any innovative group of immigrants, they tweaked the kringle a little bit for local tastes, and it’s been around ever since."

"Around" being the key word there: Racine may be the fresh kringle capital of the country, but the pastry — with a variety of fruity and creamy filling flavors — is widely available, year-round. 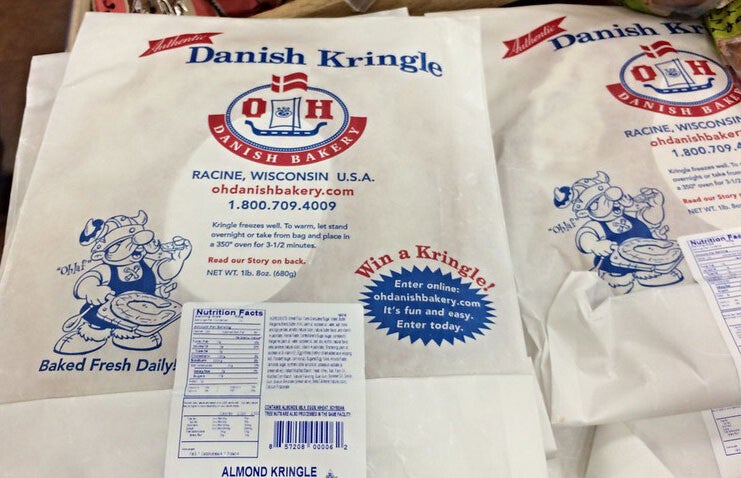 To find the original Original Cream Puffs, one must visit the Wisconsin State Fair held in August. But to find seasonal varieties that are a play on the original delicacy, like pumpkin spice and latté cream puffs, one must visit other festivals, such as Harvest Fair, held at the fair grounds. Enter the Original Cream Puff Pavilion on the grounds and you will be in sugar overload.

According to Hare, a proud member of the team that assembles every year to pull off baking, assembling and serving hundreds of thousands of the pastries, they have been the "signature dessert" of the fair going back to 1924. 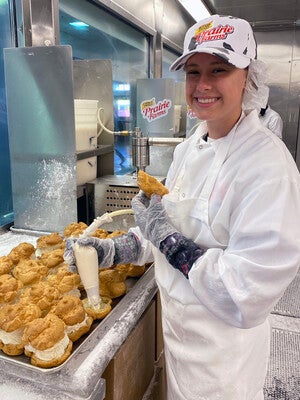 Both Hare and Sever acknowledge the average Wisconsinite or visitor is not going to attempt either of these pastries on their own. Who among us can improve an icon?

Though if one were so inclined, Sever said, the cream puff might be the more simple and attainable of the two: There’s the choux pastry and the cream. The pastry comes together quickly, and you can bake it straight from the mixer.

Team Cream Puff is closely guarding the secrets of their recipe and assembly; Hare did acknowledge, though, the essential elements of rich Wisconsin cream and "wonderful puff pastry."

Kringle, on the other hand, is a little more laborious to make. It is similar to French puff pastry but includes yeast. It’s also a laminated dough, Sever said, which means working in your butter through repeated steps of rolling and folding, and also chilling in between rolling.

"It can be a couple-day process to make yourself a good kringle," Sever said. "Something a lot of us take for granted because it’s something easy to grab and have for coffee breaks." 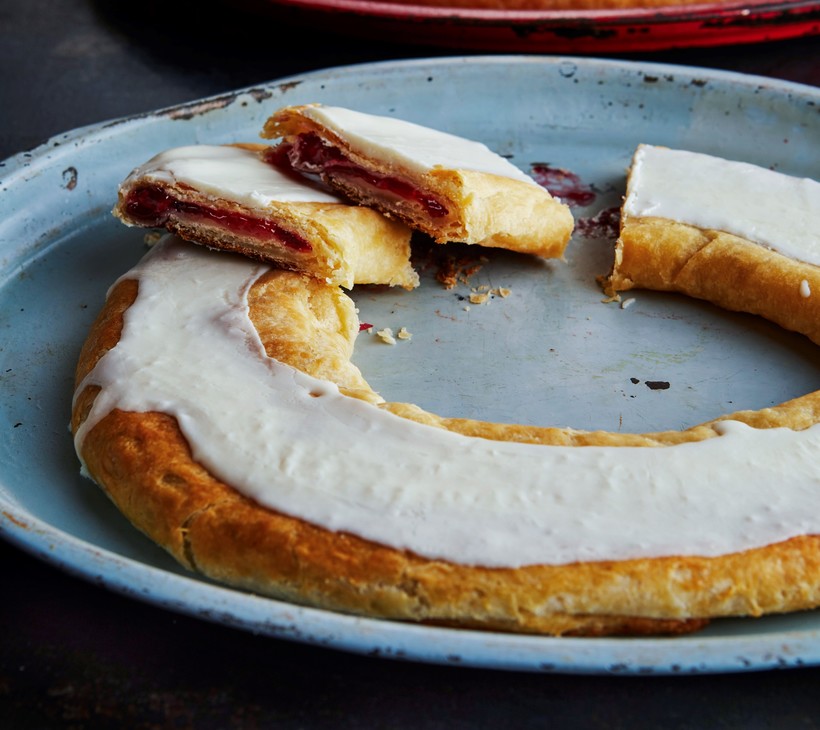 Shauna Sever, author of the cookbook "Midwest Made: Big, Bold Baking from the Heartland," says kringle can be a multi-day process to make yourself, due to using laminated dough. And if you opt for that over buying one, it's worth the wait. Photo by Paul Strabbing

"It’s just such a nostalgic wonderful feeling that fairgoers have in just tasting that first cream puff," Hare said.

That's something WHYsconsin heard from people who participated in our scientific baked goods poll or called in to "Central Time": You go to the fair, you get your cream puff, it’s just that simple. But you can’t find them year-round, and they are "something special, that you’re not going to have all the time," Sever said.

The cream puff is "something that’s towering and beautiful and delightful, and a little over the top," Sever said. "It definitely has a place, like anything that we have, whether it’s a family recipe we only have at Christmas for example. It’s going to give you a certain kind of delight. That’s where the cream puff holds a place in our hearts."

The Twitter poll does tell a different story in terms of kringle's daily desirability factor. And perhaps somewhere in the responses is a counter narrative to the scarcity argument: If it’s delicious AND you can get it readily, that makes a top pastry for the people.