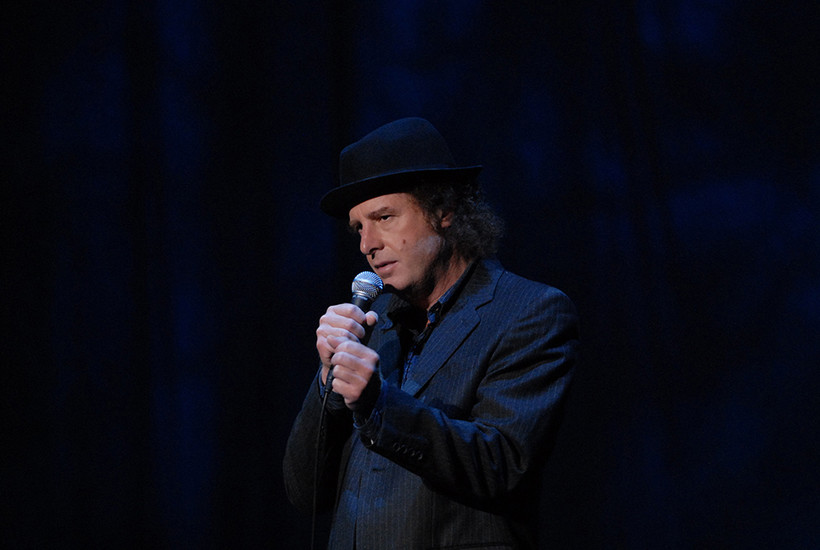 The Stand-Up Dishes On 4 Decades Of Comedy And His Creative Process
By Adam Friedrich
Share:

Comedian Steven Wright has been delighting fans with his deadpan, one-liner brand of stand-up for more than four decades. While the punchlines might be economical, the creation of each carefully constructed joke is not.

Wright caught up with WPR’s "BETA" in advance of his appearance at The Barrymore Theater in Madison later this month. He talked about his numerous creative outlets like music, filmmaking, painting and, of course, joke writing.

"I see the world like a mosaic painting. The world is made up of just tiny fragments of information," he said. "I mean, from the moment you wake up 'til you go to sleep, thousands of things pass your mind and that's where the comedy comes from, from noticing pieces that aren't usually connected together."

The Boston, Massachusetts native and avid New England sports fan got his love of comedy from Boston radio when he was a teen scrolling the dial for Bruins updates. He stumbled onto a station that aired a pair of comedy albums every Sunday night.

"I had already been watching Johnny Carson all the time, and I had it in my head that my dream would be to be a stand-up comedian. So I heard all these albums. I tuned in every week for years, and I was like studying it by accident," he recalled.

Wright paid close attention to how influences like George Carlin or Woody Allen would structure a joke and how they could mine comedy out of the mundane. He would then apply his trademarked deadpan style to it.

"Everyone's head is like a soup. It's like made up of different influences over the years, no matter if you're gonna be creative or not," Wright said. "It's like everything is a combination in your own head. So then, when I went to do standup, it was just observational stuff in the structure of a joke. I learned from those albums."

Wright’s observational style can border on the philosophical. He sidesteps easy pop culture references and vulgarity in his set, although he argues some of his personal rules for comedy are steeped in pragmatism.

"I didn't want to pile up material that I could never really do on television. So that's one reason my material was always clean," he said. "And then also, it was timeless, like gravity is not going to go out of style."

Wright said he developed his humor from his lifelong love of drawing and painting. He said that when you work hard to realistically depict something in a painting or drawing, you begin to notice the nuance of the details.

"When you paint something real, you really notice things in detail that you wouldn't notice if you weren't trying to recreate it," Wright said. "Like if there was a wine bottle on a table and then beside it was a glass, you'd see the shape of the bottle and you’d see the shape of the glass. But then you'd also notice the shape in between the glass and the bottle was its own shape. And then that would help you make it accurate. So now you're seeing three shapes: the bottle, the space in between and the glass. So accidentally I was exercising my noticing part of my mind, like noticing details from the drawing. And then that's what comedy is, noticing."

And although Wright jokes he can break his famous monotone intonation, usually during a Boston championship run, he developed his iconic delivery onstage due to an intense focus on his routine.

"I'm trying to remember how the joke goes and remembering what the next joke is," Wright said. "I was on stage, it's so intense. I was afraid at first. I'm not afraid anymore. But I'm very focused. So my deadpan is there because I'm concentrating."

Wright would realize his dream and earn his big break in 1982 with a set on "The Tonight Show with Johnny Carson." He continues to be a bastion of late night comedy with appearances across shows like Conan and his improv sessions with The Late Late Show’s former host, Craig Ferguson.

In 1985, Wright would release his own comedy record, "I Have A Pony" which would earn him a Grammy nomination. It would be more than 20 years before he’d release another one with the 2006 Grammy-nominated, "When Leaves Blow Away."

He says he doesn’t commit a lot of his material to record because he wants his audience to be met with fresh material and with his style of humor, compiling that much for a set can be tough.

"Plus I don't know how much stuff I can think of," quipped Wright. "For every three I write, or four I write, only one of them gets a big enough laugh to stay in the act ... So it's like a batting average of like one in three. Like a baseball player. Like if he's batting 300, that's good. But that means he got out seven times out of those 10."

In addition to being a Grammy-nominated performer, Wright has won an Academy Award. In 1989, he paired with director Dean Parisot on the Oscar-winning short, "The Appointments of Dennis Jennings" starring himself and Rowan Atkinson. The film was a hilarious adaptation of his comedy to the medium.

While working on the film, Wright befriended Parisot’s wife, the late Sally Menke. She was editing a film for a then unknown director named Quentin Tarantino and needed someone to voice the part of a radio DJ. Wright would introduce himself into a brand new legion of fandom when he became the voice of Tarantino’s "Reservoir Dogs."

"I'm happy to be in there," said Wright. "There’s a lot of people who know me from that movie who didn't even know I did stand-up."

Even though Wright is perilously close to completing an EGOT nomination cycle (he’d tack on an Emmy nod for his work producing FX’s "Louie") he doesn’t have plans to chase the Tony. Wright does consider maybe someday trying his hand at a full-length movie, but seems incredibly content doing what he’s doing.

"I feel very lucky because this is how my mind works and this is how I write jokes," said Wright. "And I'm glad there's an audience that still likes it. Because if there wasn't, I don't have a different way of doing it."

Steven Wright will be performing Saturday, March 28 at The Barrymore Theater in Madison.