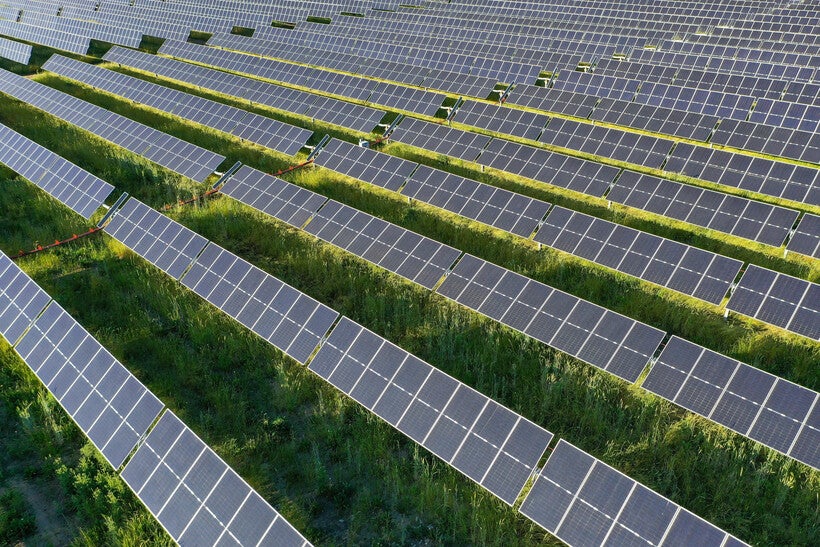 Wisconsin utilities installed and placed into service more solar power in 2021 than any other year as utility-scale solar projects are increasing. The growth of renewable electricity is expected to accelerate as part of efforts to meet carbon reduction goals to stave off the worst effects of climate change.

Around 300 megawatts of utility-scale solar came online in Wisconsin this year, including 150 megawatts of solar as part of the first phase of the Badger Hollow Solar farm in Iowa County. The project is jointly owned by Wisconsin Public Service and Madison Gas and Electric.

WPPI Energy is buying power generated by the 100-megawatt Point Beach Solar project that began operating this fall, and Madison Gas and Electric is now providing energy through its 20-megawatt solar farm in Fitchburg.

Michael Vickerman, policy director for RENEW Wisconsin, said the state is set to see around 2,500 megawatts of solar in service by the end of 2023.

"That's an extraordinary amount of construction activity, workforce hours and indirect spending in the communities where these projects are going in," said Vickerman.

The growth in solar development is expected to continue despite challenges brought on by the COVID-19 pandemic, which has led to rising costs for materials and delays in installations.

The Public Service Commission has approved construction or acquisition of roughly 2,100 megawatts of large-scale solar projects since 2019, including 632 megawatts this year. Yet, solar accounts for a small share of power produced in the state. Vickerman noted projects now in service make up around 1 percent of the state’s electricity sales.

A strategic energy assessment released last year anticipates the state’s share of solar power would grow from less than 0.1 percent to 4.5 percent by 2026. The commission’s analysis noted that may increase even more as utilities buy projects under development.

"The cost has come down close to 90 percent in the last decade-and-a-half," said Skewes. "That and the fact that load-balancing and battery technology has improved to be able to address some of the intermittency issues (with renewable energy)."

The state’s largest investor-owned utilities are planning to spend billions on renewable energy as they seek to go carbon-neutral by 2050. Alliant Energy has proposed a more than $1 billion investment in 1,100 megawatts of solar. And utilities owned by WEC Energy Group announced this year that they’re partnering with Madison Gas and Electric to buy three solar projects that include 350 megawatts of battery storage for a combined $1.5 billion.

President Joe Biden’s administration set a goal this year for the power sector to go carbon-free by 2035 and renewed the nation’s commitment to the Paris climate agreement. The climate deal seeks to limit global warming to 1.5 degrees Celsius as scientists have warned temperatures are set to rise beyond that level in the next decade.

In 2010, coal-fired power plants produced 63 percent of Wisconsin’s electricity. That’s expected to drop to at least 38 percent by 2026 as utilities move up plans to retire coal assets.

Power providers have already retired four coal plants that produced around 2,100 megawatts of electricity since 2018, according to the PSC. Over the next several years, utilities plan to shutter three more coal-fired facilities that generate around 2,600 megawatts of the state’s power mix.

The rapid transition has prompted some utilities to raise rates to generate revenues that will cover costs tied to the clean energy transition, putting pressure on ratepayers. Consumer advocates say they’re working with utilities to lower costs for customers as power providers invest in renewable projects and seek to recover costs from coal assets that are no longer economically viable.

"We have to put it together in a package that doesn't create sticker shock for customers," said Skewes. "But, at the same time, we've got to be fairly aggressive about meeting these carbon reduction goals as well."

Wisconsin utilities say the transition will save customers hundreds of millions to billions of dollars over the coming decades. Vickerman said solar developments underway represent the first wave of such projects.

"There will be additional proposals coming down the pike, starting next year," said Vickerman.

The International Energy Agency predicts renewable electricity will make up 95 percent of a projected increase in the world’s power supply through 2026 with solar providing more than half of that capacity.

A report from the U.S. Department of Energy said solar could make up 40 percent of the country’s electricity in 15 years. Right now, solar is expected to account for 5 percent of the nation’s energy next year. To reach that goal, the agency said annual solar development would have to quadruple by the end of the decade.

In 2021, the U.S. Energy Information Administration projects utilities added around 16.2 gigawatts of large-scale solar power with an additional 20.9 gigawatts slated to come online next year.