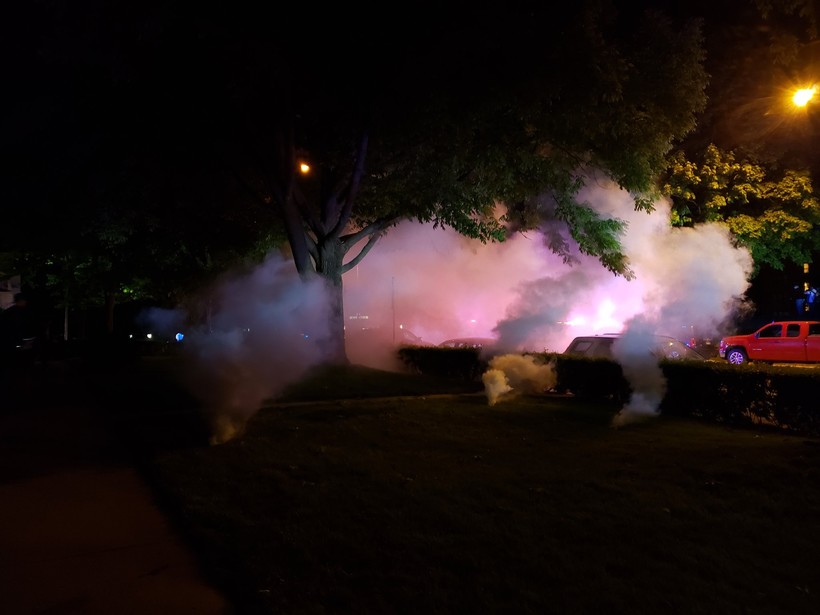 Police in Madison deployed tear gas on the night of Sunday, May 31, 2020 after clashes with protesters that began around 10 p.m. during a protest of George Floyd's death. Shawn Johnson/WPR

More Than 100 Arrested In Milwaukee, 15 In Madison After Vandalism Follows Sunday Protests

Milwaukee police have arrested more than 100 people in the last two nights amid a nationwide wave of protests following the alleged murder of a black man by Minneapolis police. Madison police arrested 15 people Sunday night. And in Green Bay, police are looking for the person they say fired multiple shots from a crowd of protesters into a closed gas station around 11 p.m. Sunday. Police and protesters in multiple cities reported injuries in the clashes.

Sunday was the second night of Wisconsin protesters’ clashes with police. Following peaceful protests during the day, there was widespread looting and property damage across some of Wisconsin's largest cities Saturday and Sunday nights.

According to a statement early Monday from interim Madison Police Chief Vic Wahl, damage in Madison started shortly before 10 p.m. Sunday. Wahl said one person arrested for looting had a handgun. He wrote that "multiple stores were looted" and "multiple fires were set" Sunday.

Details were scarce Monday morning about the number of arrests made in Wisconsin or the scope of damage done to property Sunday night, the second night of protests in cities across the state. Wahl said police had received 1,420 calls over the weekend. In a statement Monday on Twitter, the Madison Police Department said "several officers" were injured by rocks and other projectiles, including a Wausau police officer struck in the eye while riding a Madison Metro bus.

A speaker at a Madison rally held by Freedom Inc. on Monday afternoon said two protesters had been hit by a car in the clashes. She did not say whether they were injured. In addition to other cases, an intoxicated man reportedly shot himself in the leg near a downtown parking ramp early Monday morning.

As of Sunday afternoon, Milwaukee police had reportedly arrested more than 60 people involved in looting or property damage. In a Facebook post Sunday night, Milwaukee police said they were "actively arresting curfew violators."

At a Monday afternoon press conference, Green Bay Police Chief Andrew Smith said clashes there started around 10:30 p.m. Sunday, and as crowds assembled near a Marathon gas station in the city, someone shot multiple times from the crowd into the building.

"That caused a panic," Smith said. He said vandalism by small groups of mostly young people continued until about 3 a.m.

Smith said a handful of people were arrested or cited Sunday night. He said police are reviewing video footage from the protests and expects more arrests to follow.

Green Bay has a curfew that runs from 9 p.m. Monday to 6 a.m. Tuesday.

"To all these people who want to go around and tear up things, I have something to say to y'all: Why don't you tear up in your own blasted yards and leave our community alone?" Jackson-Enos said.

Property damage was also reported in Racine and Kenosha on Sunday night.

Images of fires, looting and the use of tear gas by police in riot gear followed peaceful protests during the day in Wisconsin cities and across the country. Protests and later looting first broke out Saturday night after protests spread over the death of George Floyd, a black man killed in Minneapolis after a police officer knelt on his back and neck for about nine minutes. The officer has been charged with third-degree murder and second-degree manslaughter.