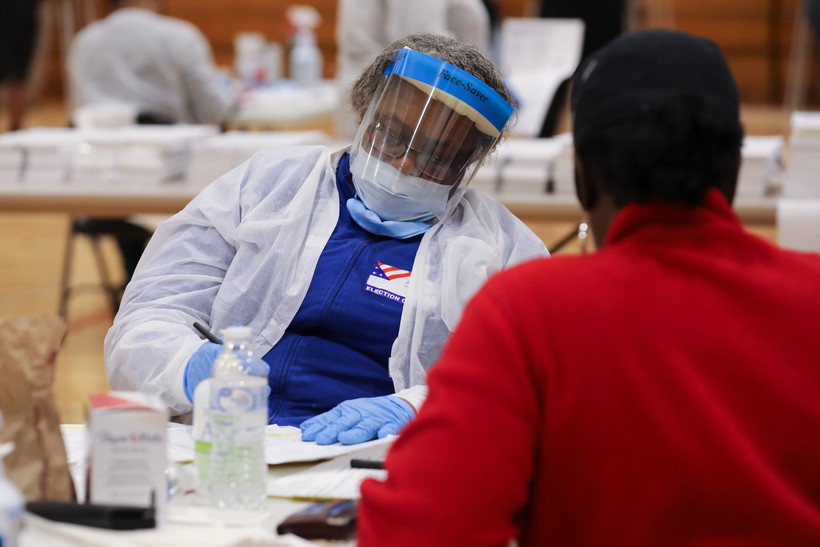 A poll worker wearing protective gear assists a voter at Marshall High School in Milwaukee on April 7, 2020. A new study from the Brennan Center for Justice estimates that consolidating the city’s polling sites down to five from 182, and voter fears of contracting the coronavirus, depressed voting by 9.9 percentage points among non-Black voters and 15.9 percentage points among Black voters. Coburn Dukehart/Wisconsin Watch

New reports of COVID-19 decreased in Wisconsin on Sunday, based on the latest data published by the state Department of Health Services. DHS reported 522 new cases of the virus on Sunday, bringing the average for the past seven days to 548 daily cases. One week ago, the average was 418 daily cases.

DHS reported 738 new cases of the virus on Saturday, setting a one-day record for the most number of new cases since reporting began in March. The second-highest number of cases in a single day occurred on May 29 when 733 cases were reported.

The latest figures bring the overall total of positive cases in Wisconsin to 31,577, according to the DHS. A total of 796 people in Wisconsin have died from COVID-19, with no new deaths reported on Sunday.

According to DHS, 10.4 percent of all test results reported on Sunday were positive for COVID-19, bringing the average percentage of positive tests over the past seven days to 6.5 percent. The seven-day average a week ago was 4.7 percent.

Wisconsin's daily testing capacity — based on the availability of test supplies and adequate staffing — has grown from 120 available lab tests in early March to 19,014 as of Sunday. The number of actual tests reported on Sunday was 4,996.

Overall, DHS has recorded a total of 615,688 tests over the course of the pandemic. There are 584,111 tests that have come back negative.