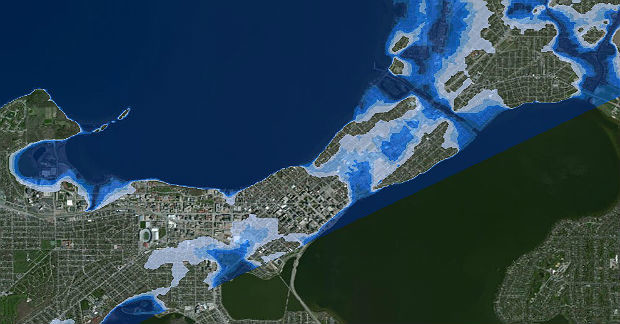 If Madison experienced the same kind of storm as Baraboo did in 2008, central neighborhoods and other areas of Madison would flood.

Despite all the heavy rain in the first half of December, with flood warnings across parts of the state, Wisconsinites should be thankful they didn't experience a downpour on the order of 5 inches in just 24 hours. Such extreme rainfall can cause damaging flooding, severe soil erosion and crop loss. Wisconsin is experiencing these events more frequently, a trend that is expected to continue as the planet's climate warms. However, it is important to note that any given weather event can't be attributed to long-term climate change.

Being prepared for extreme rainfall events requires that we understand both the risk and our vulnerabilities to it. University of Wisconsin-Madison researchers and I have been working for several years on a method that does just that, without incurring any of the damage that comes with actual heavy rain.

"Extreme storm transposition" is one tool for understanding and reducing risks and vulnerabilities from our changing climate. This computer model allows scientists to simulate the effects of an actual extreme rainfall event over an area that has never experienced such a storm, so that state water resource managers can identify areas of risk and potential damage, and therefore take preventative measures. Municipal stormwater utilities, sewerage treatment plants, emergency response managers and land conservation departments can all benefit from studying a transposed storm. A case study focusing on Dane County's Lake Mendota illustrates this tool, which the National Oceanic and Atmospheric Administration has added to its online climate resilience toolkit.

Many in southern Wisconsin will remember the June 2008 floods along the Baraboo River that submerged 810 square miles of land and closed Interstate 90/94/39 at Portage for three days. The Federal Emergency Management Agency paid more than $30 million in flood damages to compensate victims of this disaster. Reedsburg lost its sewage treatment plant to flooding, and 90 million gallons of raw sewage discharged to lakes and streams, contaminating 700 drinking water wells.

What would happen if that rainstorm had been centered on Madison instead of Baraboo?

Working with Ken Potter, UW-Madison civil and environmental engineering professor, and students Doug Brugger, Dan Fletcher and Pearl May, we used National Weather Service radar data from June 2008 to simulate the extreme rainfall of the Baraboo storm falling over the Madison area. The results are sobering. The storm transposition shows rainfall across the upper Yahara Watershed draining into Lake Mendota, the headwaters lake in the chain, and raising the water level high enough to overflow the banks and flood portions of central Madison and nearby neighborhoods. Estimates of the duration of this simulated flooding range from days to weeks, depending on how quickly downstream flood flows would be able to move. Damage would be catastrophic.

Dane County has been able to take steps to reduce the risks and vulnerabilities from an extreme rainfall event like the 2008 Baraboo storm. As a result of our study, the county installed rain and stream gauges throughout the watershed, meaning incoming flows can be monitored in advance of a significant rise in water level. With this knowledge, county officials can fully open the dam and locks at Tenney Park to release water from Lake Mendota before it can flood the city. Additionally, emergency responders can develop better response plans based on flood projections. At the household level, residents in low-lying areas might consider obtaining flood insurance for their properties. The lessons learned from this Yahara Watershed simulation can help other communities around the state anticipate the effects of extreme rainfall and ward off disastrous consequences.

Editor's Note: David S. Liebl is a University of Wisconsin-Extension statewide specialist on climate and stormwater, and co-director of the Wisconsin Initiative on Climate Change Impacts.