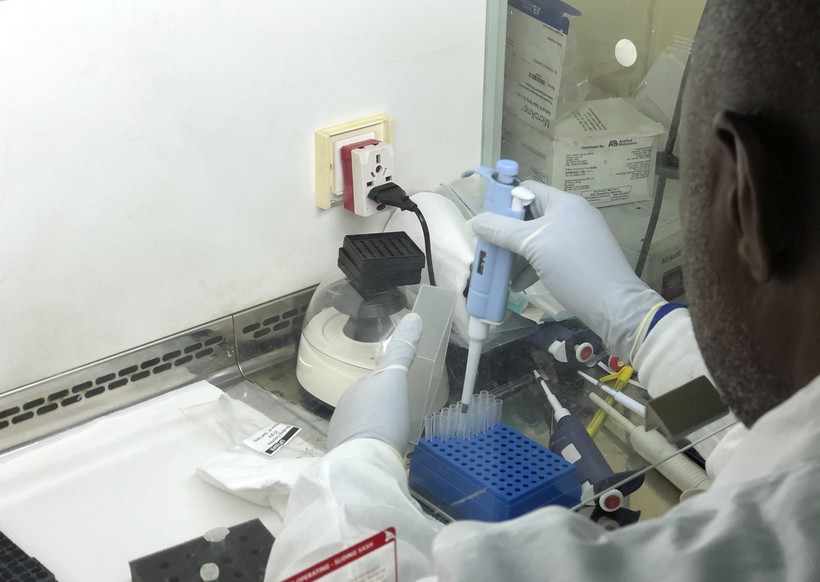 In this photo taken on Friday Dec. 25, 2020, Virologist Sunday Omilabu in a lab, during an interview with The Associated Press in Lagos, Nigeria. A Nigerian scientist has spent the holiday season in his laboratory doing genetic sequencing to learn more about the country’s COVID-19 variant, as cases increase in the country. Virologist Sunday Omilabu says the information he gathers about the variant will help battle the spread of the disease in Nigeria, Africa’s most populous country with 196 million people. Lekan Oyekanmi/AP Photo

Minnesota Has Confirmed 5 Cases Of A More Contagious COVID-19 Variant. Could It Be In Wisconsin?

'It Has Certainly Not Been Detected By Us Yet, But That Doesn't Mean That It's Not Out There,' Expert Says
By Megan Hart
Updated:
Tuesday, January 12, 2021, 2:00pm
Share:

A more transmissible variant of COVID-19 has been confirmed in Minnesota. And experts say they wouldn’t be surprised if it’s already circulating in Wisconsin.

The variant made international headlines after it was discovered in the United Kingdom last year. While data shows it’s more contagious than the variants widely circulating in the United States, there’s no indication it leads to worse health outcomes or renders approved COVID-19 vaccines less affective, experts say.

But experts agree it’s still important to know whether it’s present in Wisconsin.

On Monday, Madison Mayor Satya Rhodes-Conway said it’s "very likely" the more transmissible variant of the virus is in Wisconsin. But there’s no evidence of it yet, said Dr. Thomas Friedrich, a professor in the Department of Pathobiological Sciences at the University of Wisconsin-Madison’s School of Veterinary Medicine. Positive specimens are sequenced at a higher rate in Dane County than almost anywhere else in the country, he said.

"So I think we have a fairly decent handle on whether (the variant) would be common in Dane County," Friedrich said. "It has certainly not been detected by us yet, but that doesn't mean that it's not out there."

The new variant has also gone undetected by the State Lab of Hygiene and another lab in La Crosse. Overall, specimens from about 0.7 percent of Wisconsin's positive PCR tests have been sequenced, according to the Wisconsin Department of Health Services (DHS).

So far, it’s turned up in at least nine states. And the U.S. is behind many countries when it comes to sequencing specimens.

According to GISAID, a global database of genomic data, the U.S. sequences three samples per 1,000 positive cases — 15 times fewer than the U.K.

On average, American labs are sequencing specimens about three months after they’re collected, Friedrich said. By then, it might be too late to make proactive decisions based on the findings, he said. Friedrich's lab aims to sequence samples in two weeks.

There’s A Push For More Genetic Sequencing In The US

Genetic sequencing is important because it helps scientists understand how the virus spreads through space and time, Friedrich said. It also helps them track mutations that can change the virus’ behavior — like those that occurred in B.1.1.7.

"And so part of our need for this genetic surveillance is just to know, are these viruses present in our region? And if they are, hopefully we can detect them early and use our contact tracing resources to find out where they’re spreading and hopefully do what we can to control that spread," he said.

It’s normal for viruses to mutate. New variants, which could be more transmissible, have also been detected in South Africa and Japan. Scientists have expressed concerns over whether the COVID-19 vaccine may be less affective against the variant first found in South Africa. There's no indication that variant has made its way to the U.S.

There’s a growing push to sequence more samples in the U.S., despite the challenges labs have faced, Friedrich said. At first, some sequencing labs struggled to receive specimens from the commercial labs that originally tested them for the coronavirus, he noted.

"But I think part of this just stems from the fact that we haven’t had a nationally coordinated response at many levels, and this is also part of it," he said.

While there’s no evidence B.1.1.7 is more lethal than other strains of the virus, it’s still a cause for concern. If it’s more contagious, more people are likely to become infected. And more cases mean more severe cases, Friedrich said.

Dr. Michael Landrum, an infectious disease expert at Bellin Health, said hospitals in northeast Wisconsin are much less crowded than they were back in November, when COVID-19 cases spiked in the region. But, it’s easy to go backward, he said.

"All you have to do is take a look at California where they're having such a huge increase in cases," he said.

That’s especially true if a more transmissible variant of the virus makes its way to the area, Landrum said. Wisconsinites should continue to wear masks, social distance and avoid unnecessary gatherings, he said.

DHS will continue to recommend these public health measures — along with getting tested if you're experiencing symptoms or you've come in contact with someone who has the virus — if the new variant turns up in Wisconsin, said spokesperson Elizabeth Goodsitt.

"These are the best strategies to stop the spread of respiratory viral infections like COVID-19, regardless of the strain. If new, more contagious strains are in the community, then we have to work even harder on these things in order to prevent infections," she said via email.

If B.1.1.7, or another more transmissible variant begins circulating in Wisconsin, a larger portion of residents may also need to be vaccinated, she said.

"Vaccination is a critically important tool," she said. "We must encourage everyone to participate in our mass vaccination campaign in order to end the COVID-19 pandemic as soon as possible."