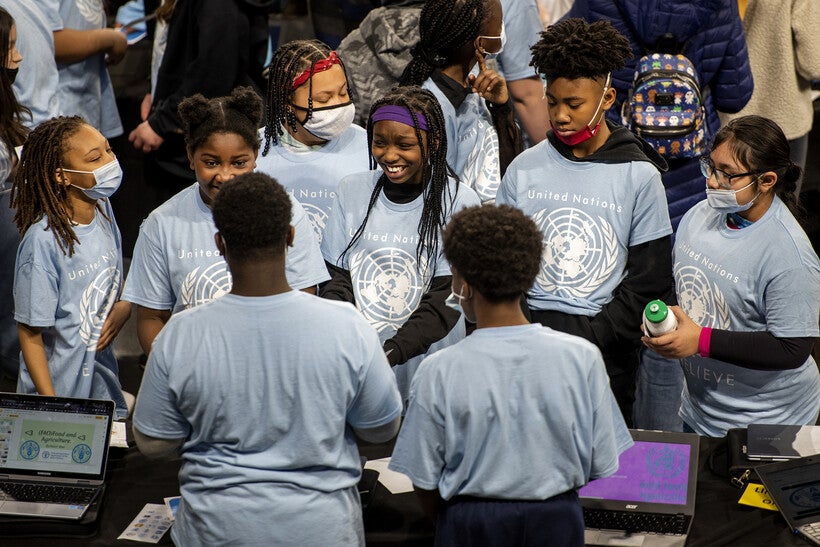 Students listen to a project being presented during a World Fair field trip Tuesday, April 19, 2022, in Milwaukee, Wis. Angela Major/WPR

For Milwaukee students, the return of the annual World Fair marks another milestone: Field trips are back

About 3K students in grades 4 through 8 traveled to a downtown arena for an international celebration
By Madeline Fox
Share:

Milwaukee Public Schools students' excitement was palpable Tuesday morning as about 3,000 of them crossed another milestone in easing back to pre-pandemic normal — their first field trip in more than two years.

Students from 16 schools swarmed University of Wisconsin-Milwaukee's Panther Arena to celebrate their first World Fair since 2019. Small teams of fourth-graders set up tri-fold poster boards with fast facts about a country of their choice, fifth-graders presented about different agencies within the United Nations, and the three older grades showcased more sophisticated projects about U.N. programs and sustainability goals. Students of different ages brought folded paper passports around to the arena's broad floor, collecting stickers in exchange for asking questions about the different presentations. 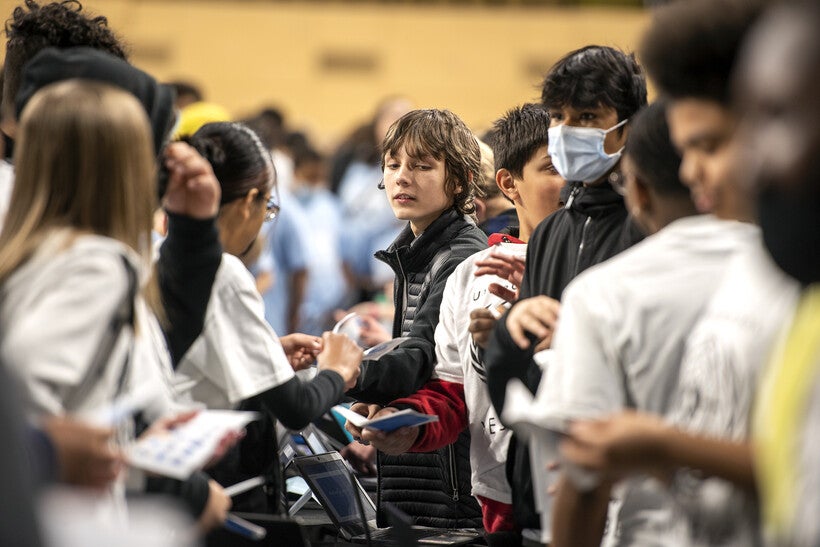 Students exchange passports as they explore the different projects at the World Fair on Tuesday, April 19, 2022, in Milwaukee, Wis. Angela Major/WPR

"I ask them, what's the population, and what's their country, and what they like about their country," said Synia Houston, a fourth-grader at Albert Story Elementary on Milwaukee's west side.

Synia made a poster on the Marshall Islands for her own presentation, but had a favorite country she learned about while picking up stamps for her passport.

"I liked how there was 2.8 million people in the population – I forgot what country, though," she said.

The World Fair began in fall 2016, when teachers at nine MPS schools began incorporating lessons about the U.N. and various member countries into their classrooms, building toward student presentations at the first World Fair gathering that spring. It took a two-year hiatus in 2020 and 2021 because of the pandemic.

"Now we're here in '22, and we're thrilled to have it back again," said Annette Robertson, a former MPS teacher, who, with her mother Joan, first pitched a middle-school focused Model U.N. program to MPS in 2016. "I'm jumping out of my skin, and so are the students." 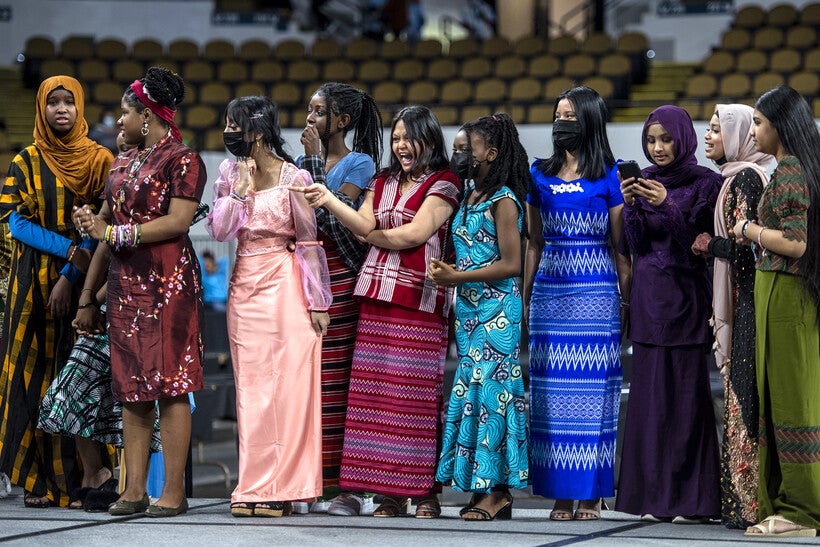 The students said they've learned a lot about the world, and about global diplomacy and aid, through their projects. Victory School seventh-grader Malina Kielpikowski worked with two classmates to put together a two-minute video on U.N.-Habitat, a program that works on building resilient and sustainable communities.

"With all this information that we learned, we learned a lot more about what the U.N.-Habitat does, and how much stuff it helps with," she said.

One of her partners on the project, Savanna Thomas, said the project also shifted her perspective on world events.

Students' excitement about being outside of school and around students from other parts of the city built to a fever pitch after lunch, as they roared and clapped appreciatively at cultural performances.

Greenfield Bilingual School students in cowboy hats and red bandanas performed a dance routine to "El baile del sapito." A troupe of six Italian dancers in traditional dress stepped and spun to music before bringing a group of younger students on stage to learn some of the dance. A procession of students from the Milwaukee Academy of Chinese Language clad in African dashikis, a Chinese hangfu and cheongsam and other clothing from around the world strutted across the stage in an international fashion show. 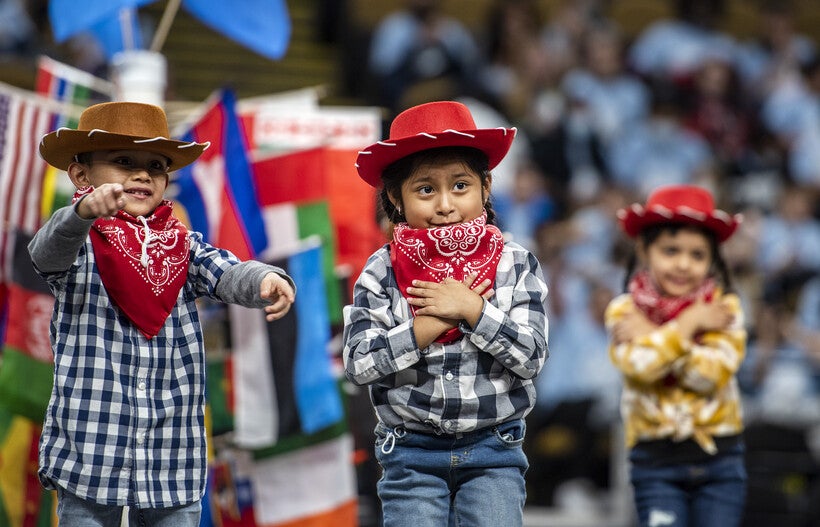 "I don't actually know much about it, the only thing I know is that if you're a woman, you're not allowed to show your thighs, because if you show your thighs, that means you're disrespecting yourself, your family and our culture too," said Abigail Alembe, an eighth-grader who wore a long, colorful Congolese dress her parents helped her pick out.

Her classmate, Zai Wilondja, also wore a dress her Congolese mother helped her choose, and wrapped her hair in a red scarf, her favorite color.

The 16 schools chosen to participate in the World Fair have the highest concentrations of students with international roots, many of them refugees resettled in Wisconsin or part of immigrant families.

"Most of the kids are from Africa, one of my friends is from Swahili, and another one of them is Muslim," said Nevaeh Ginlack, a fourth grader at Story Elementary.

Nevaeh picked Madagascar for her country, because she loves the movie of the same name and was excited by how many animals live on the island. If she could visit any country, though, she said it would be China.

"It has a lot of cool stuff there, it has like all kinds of places there, and it's a really big country," she said.

Robertson, the former teacher who's been involved in the World Fair since its start, said fostering that kind of curiosity was the goal of the program.

"As they all become an international and a world citizen, and they're excited about it, maybe they'll visit the country, or a country, sometime," she said. "But they have all become more compassionate and empathetic to cultures around the world." 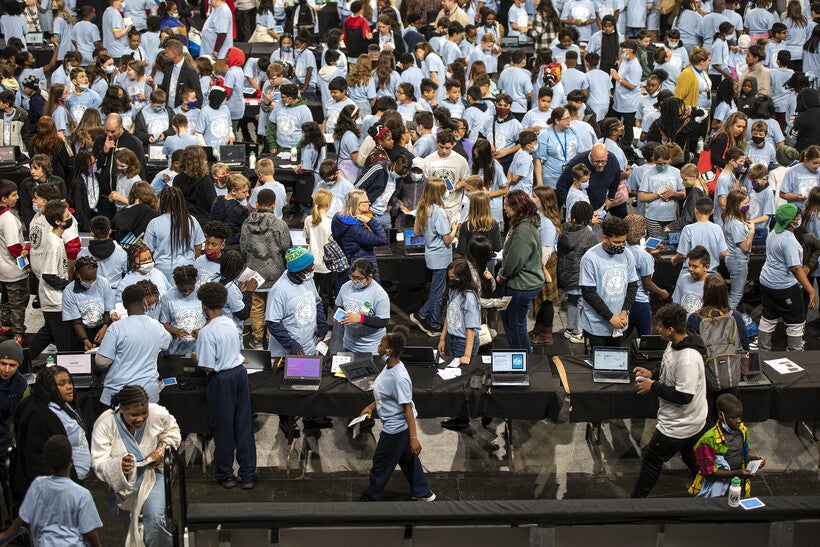 Students listen to presentations on countries and work to fill up their event passports Tuesday, April 19, 2022, in Milwaukee, Wis. Angela Major/WPR