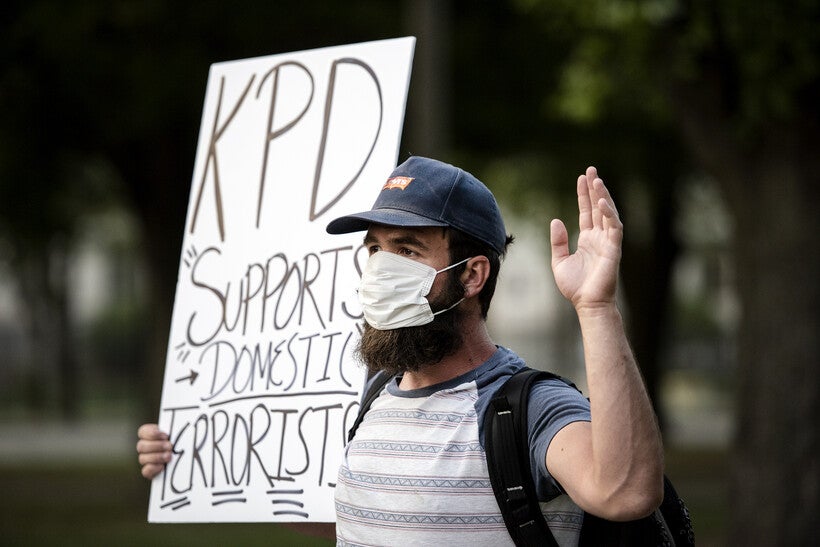 The Milwaukee Sheriff's Department said in an email that Jacob Blake, the 29-year-old man shot by a Kenosha police officer on Sunday, is no longer in custody under a federal arrest warrant after posting bond Friday morning.

Kenosha police chief Daniel Miskinis said at a Friday afternoon press conference that "an outside agency," not the Kenosha police, had Blake under guard, and said he could not go into further specifics, except that Blake was under arrest for an outstanding warrant for third-degree sexual assault. The Milwaukee Sheriff's department said in the email that it had been assisting the Kenosha County Sheriff's office with the hospital watch. The sheriff's office said the watch ended immediately once it was notified Blake had posted bond.

The Kenosha News reported that Blake is no longer handcuffed in his hospital bed.

Miskinis also used the press conference to walk back comments he made Wednesday that seemed to suggest the three protesters who were shot, two fatally, on Tuesday night were at fault for being out past curfew. He said his comments were misconstrued.

"The Kenosha Police Department and the sheriff's department function under curfew as a tool to keep people safe, and we're requesting all people to obey that curfew and stay home," he said. "In no way was my comment earlier intended to suggest that by being out after curfew, that those persons played a role in their deaths."

He said the two deaths and injury to a third person "rest solely on the person who did that," meaning the shooter. Kyle Rittenhouse, 17, has been charged in those shootings.

Sheriff David Beth, who has recently come under fire after a video from 2018 in which he said some people "aren't worth saving" resurfaced and went viral, also used the press conference to walk back earlier remarks. On Wednesday, he had said that Tuesday had been a calmer night of protests.

He said he spoke to his daughter, who reminded him that he hadn't talked about the two people killed and third who was injured Tuesday night.

"I'd like to point out how very sorry I am that two people lost their lives, one is seriously injured, and we also had one young gentleman on Sunday night that was shot too," he said. "For all the loss of life, for all the injuries, I feel really bad that this happened here in Kenosha."

Miskinis, the police chief, said just under 50 people have been arrested over the course of the week's protests, on charges ranging from curfew violations, to weapons offenses, drug charges and having illegal fireworks or, in one case, a flamethrower.

One group that held a press conference Thursday about its members being picked up by law enforcement in unmarked vehicles announced on Facebook that their members had been released about 24 hours after their initial arrests on curfew violations.

This is a write up from one of our members on the ground, outside of the Kenosha Jail waiting for SDS folks to be...

One after another, Kenosha county and city officials reiterated their frustration with protests that included property damage and looting, and admonished demonstrators to keep things peaceful.

"The last number of nights, you've seen very peaceful protests, and that's what it's about, that's how you make change," said Kenosha Mayor John Antaramian. "We encourage the peaceful protesting that has occurred."