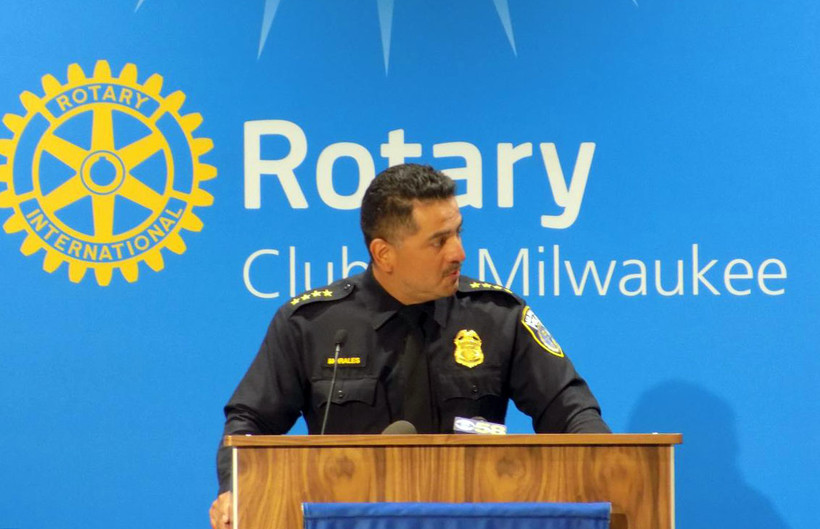 Milwaukee Police Chief Alfonso Morales has been removed from his post and demoted to the rank of captain following months of turmoil amid Black Lives Matter protests and years of community distrust of officers.

The city's Fire and Police Commission voted unanimously Thursday on the demotion. There was much speculation that Morales would lose his job. Assistant Chief Michael Brunson Sr. will serve as acting chief of police. Commissioners asked that Brunson bring forward a personnel plan within the next two weeks. Commissioners didn't give a timeline about when a permanent chief would be hired.

Morales could not immediately be reached for comment Thursday night, but his attorney, Franklyn Gimbel, issued a statement saying, "The Chief will be consulting my law firm and his family to consider prospective actions if any and in the interim he will work with the newly named acting Chief to make the transition work for the Milwaukee community."

Last month, the commission issued 11 directives to the police chief, ranging from a community policing requirement to the implementation of the city’s mask mandate in the department, as well as a range of data requests. During the meeting, the commission did not say if the department had completed those directives or allow Morales to speak in open session.

Morales and Gimbel have said the commission set him up to fail. In a report released by the Milwaukee Police Department Wednesday, the department accused the commission of breaking the law when it handed down the directives.

Milwaukee Mayor Tom Barrett held a press conference Thursday following the vote, saying he was "very upset" the commission did not follow through on the process they started and believes what transpired lacked transparency.

"When it issued those directives I believed that was within their purview," Barrett said. "I did look at them, and I did not receive any indication from the chief that he was unhappy with those directives. I felt he would be given an opportunity to respond."

Still, Barrett said he understands why commissioners are frustrated with Morales. "Rather than spending two weeks responding, he spent two weeks on a PR campaign," Barrett said, adding that he will work with Brunson to reduce crime in the city.

The commission reappointed Morales to a four-year term in December, but on Thursday, said they have been disappointed with his performance.

"There has been a lot of chatter in the media about us issuing directives to you and except for maybe one of them, they were all things you said you would do in the first 100 days and beyond," Commissioner Ann Wilson said to Morales before the vote. "And I’m disappointed you didn’t, because you have such a wonderful story. And to just not do what you said you wanted to do, just makes me sad."

Morales started with the Milwaukee Police Department in 1993. He became a detective in 1999, working in the Criminal Investigations Bureau until 2009. After leaving that bureau, he became a lieutenant managing the gang crimes and homicide units during the night shift. Morales also worked for the department's internal affairs division, its police academy and as a crisis negotiator commander. He has served as chief since 2018.

Commissioner Raymond Robakowski accused Morales of intentionally misleading the public with press releases and videos and villainizing the commission.

"Mr. Morales has failed the men and women of the Milwaukee Police Department," Robakowski said.

During a press conference held an hour before the meeting, Commission Chairman Steven DeVougas gave some indication that he was looking to fire Morales.

"This has never been about me. It’s not even about Chief Morales, it’s about reform, accountability and leadership," DeVougas said before the commission meeting. "I heard the chief say earlier we are living in strange times, and I agree. 2020 has been strange. But change must come and will come to the city of Milwaukee."

Several others spoke in favor of firing the police chief, including Alderman Ashanti Hamilton.

"We should not be running a police department or a city where people have to protest for their basic human rights," Hamilton said. "There is no tolerance for continuing to move in the wrong direction. We need immediate change. I stand by the calls of the Fire and Police Commission."

"Nine months ago, an attack on systematic reform was put on play, a button was pushed, a lever was pulled and the mechanism was put in motion," DeVougas said. "For nine months, I have watched a false narrative as we have called for greater accountability from the police department."

An independent ethics report found DeVougas lied about his legal representation of a prominent real estate developer who is accused of rape. The independent report also criticized aspects of the Police Department's handling of the case.

On Wednesday, Barrett sent a letter to commissioners asking them to replace DeVougas.

During the meeting, DeVougas lost his position as chairman. Commissioner Nelson Soler will now chair the Fire and Police Commission.