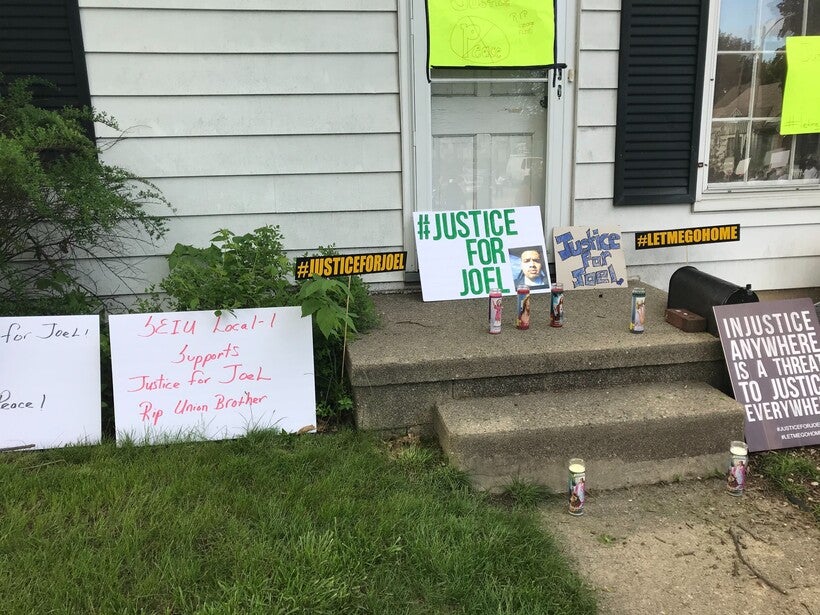 Demonstrators left signs calling for justice for Joel Acevedo outside Milwaukee Police officer Michael Mattioli's house in a protest on May 29, 2020. Madeline Fox/WPR

A Milwaukee police officer who pleaded not guilty to reckless homicide following the death of a man during a fight at the off-duty officer’s home has resigned.

Milwaukee Mayor Tom Barrett and protesters have been calling for Officer Michael Mattioli to be fired since the death of Joel Acevedo, 25, in April. The Milwaukee Police Department confirmed Tuesday evening Mattioli has stepped down.

Mattioli, 32, was off duty on April 19 when he reportedly got into a fight with Acevedo at a southside Milwaukee home. He is accused of using a choke hold on Acevedo, who was transported to St. Luke’s Hospital and died from his injuries six days later.

Mattioli was originally arrested and charged with first-degree reckless injury and strangulation and suffocation. He has been on paid suspension since April. He was paid $109,006 in 2019.

In a statement, Barrett said he hopes for a quick resolution to the matter.

"I am pleased Milwaukee taxpayers will no longer be responsible for paying his salary," Barrett said. "I am confident justice will be served for everyone involved in this case."

During Mattioli’s initial court appearance Tuesday, Acevedo’s sister Julissa Acevedo spoke on behalf of the family. She said her brother could light up the room.

"I’ll probably never be the same person after this," Julissa Acevedo said.

She said police officers overstep their boundaries too often, and unjustifiably kill people only to get away with it.

"This is happening all over the country, and I’m hoping Joel’s case will help change the narrative and shed some light on the many other cases all over the country," Acevedo said. "This needs to stop. Officers should be held to a higher standard. Their behavior on and off duty matters. These are people that we pay to protect our city. So why did my brother die in the hands of a police officer?"

Acevedo said Mattioli held her brother in a choke hold for more than 10 minutes, and that he has shown no remorse.

Mattioli did not speak at the hearing. His attorney, Michael Hart, said that Joel Acevedo's death is unlike other police killings of civilians the country has witnessed in recent months.

"Mr. Mattioli was a private citizen in his home," Hart said. "That this bears any resemblance to some of the systemic racism we’ve seen throughout this country is misguided."

"There is always a loophole that protects police officers," Coleman said. "They are allowed to break laws, or even commit homicide and it’s standard operating procedure. He is under criminal investigation and still gets to keep his credentials and go to another police department and get work."

Mattioli is a 2005 graduate of St. Thomas Moore High School in St. Francis. He was a student at University of Wisconsin-Milwaukee and served in the U.S. Army before being honorably discharged in 2016, Hart said. He has been a member of the Milwaukee Police Department since 2006.