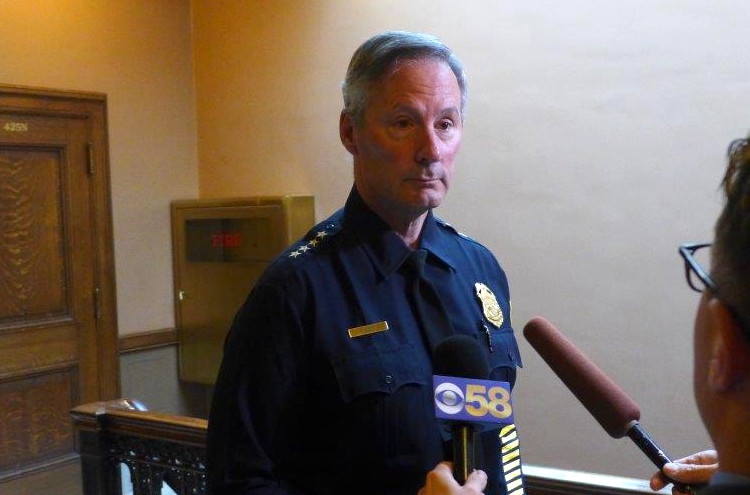 Milwaukee Police Chief Ed Flynn partly attributes the increase in homicides to there being more guns on the street overall.

Milwaukee Gun Homicides Have Soared In 2015

On New Year's Eve, a Milwaukee block watch captain named Gayle says that she, along with her friends and family, will be celebrating the holiday in the basement of her home.

It's a question of safety: There are a lot of gunshots in her neighborhood, she says, and bullets have struck the main floor of her house several times.

This year in particular, the gun homicide total in Milwaukee has soared: The city has reported that 117 people have been shot to death, an increase of about 35 over last year at this time.

The shootings have left some scared, the police chief upset, and the city's mayor hoping that promises from President Barack Obama's administration will be kept.

Gayle said she's appealed to the police for more help.

"I ask for police presence in my neighborhood to cut down on the senselessness. I feel if they ride through my neighborhood, the ones who are doing these things will be more cautious," she said.

Then, there are the department's efforts to perhaps reduce violence by taking small steps toward addressing poverty — "when want is felt most keenly," in the words of Milwaukee Police Chief Ed Flynn. Flynn paraphrased the line from Charles Dickens' "A Christmas Carol " when he held a news conference this week highlighting police delivering donated food to some low-income families in the city.

When asked about this year's increase in gun deaths, along with the hundreds of other nonfatal shootings in the city, Flynn broke down the numbers.

"What I can report is that our robbery-related homicides are down significantly compared to last year, but those homicides that derived from arguments, fights and retaliation among those people that have significant criminal records is up over 100 percent," said Flynn. "That by itself is driving this homicide total."

Flynn said another factor is there are more guns on the street than during any time in his eight years as chief, along with weaker gun laws that include, he said, the state statute allowing the concealed carry of guns.

Flynn declined comment, for now, on the expectation that President Obama will issue an executive order on guns within the next few weeks. Milwaukee Mayor Tom Barrett, on the other hand, said he's glad the president appears ready to act.

The mayor said closing loopholes in the background check requirement for gun purchases would help Milwaukee, noting that the checks aren't required for firearms purchased at gun shows or online.

"That's something that's very, very important, because those are oftentimes the guns that we fear will end up in the hands of criminals," said Barrett.

Conservatives in Congress are already trying to block any executive action by the president, and Gov. Scott Walker and other Republicans in Wisconsin maintain the better approach is to address community mental health issues and tighten national security.

Retired Milwaukee County Judge James Gramling, however, argues that people who don't live close to gun violence underestimate the need for stronger action, because they underestimate the economic impact on those who are wounded and other survivors.

"For these victims, there are months, maybe years of anguish — mental, physical," said Gramling. "There are medical costs not covered by insurance. There are lost earnings."

Gramling asserts that gun control advocates have to work harder to show that everyone pays for gun violence — especially, he said, in a year such as this.