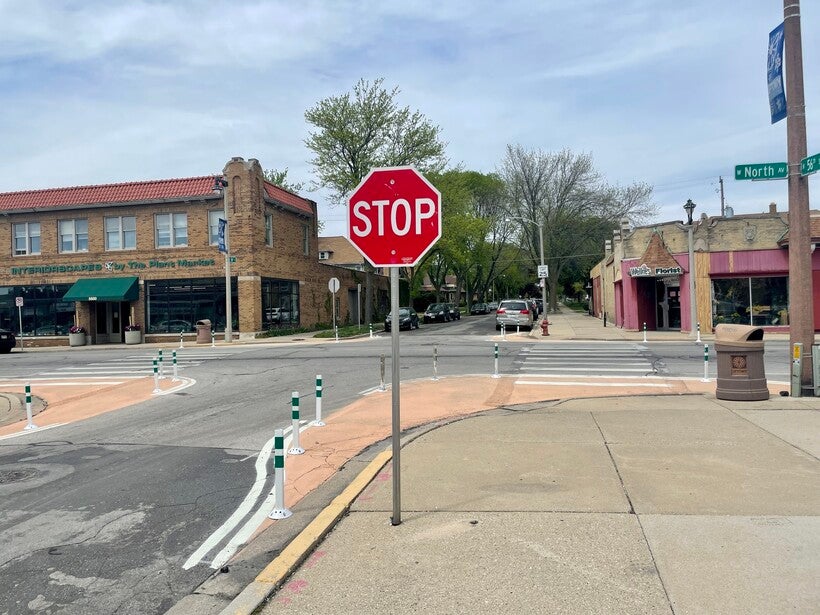 A bump-out surrounds the curb at the intersection of 56th Street and North Avenue in Milwaukee. Bump-outs are used to calm traffic and put additional space between cars and pedestrians. Madeline Fox/WPR

Civil lawsuit is first of its kind against a driver who racked up 44 traffic citations in five years
By Evan Casey
Share:

Illegally passing in a bus stop lane, causing an accident.

Running a red light in a busy intersection.

These are just a few of the 44 total citations mentioned in a 17-page lawsuit filed by the city of Milwaukee against 53-year-old Anthony Szablewski of Milwaukee.

The civil suit is the first in what city officials say is a new tactic in their battle against what Mayor Cavalier Johnson has called a "reckless driving crisis."

The court could even take away his vehicle if the behavior continues, police say.

"This new approach of civil litigation against egregious reckless drivers is intended to send a clear message to all the chronic reckless drivers in Milwaukee that we take the safety of everyone on the roadways in our community very seriously," Milwaukee Police Chief Jeffrey Norman said in a news release.

Reckless driving is an issue that has plagued the city in recent years. In 2020 alone, a record 107 traffic deaths were recorded in Milwaukee County.

In addition to Szablewski, Milwaukee police said they identified 20 more offenders who have been ticketed more than 10 times in the past five years. Police have been working to notify those offenders that they may be the subject of a future lawsuit.

"I think the fact that someone is able to rack up 44 tickets and still be out among us operating a vehicle is crazy," said Jordan Morales, the vice president of the Sherman Park Community Association.

Morales hopes the lawsuit will deter other reckless drivers from continuing in their behavior.

"This is another way that we can get at these repeat offenders' cars who just do not care about our safety on the streets," he said.

Milwaukee Alderman Michael Murphy has pushed for civil litigation against the city's worst reckless drivers in the past.

He said he was "very pleased" when he saw the lawsuit.

"It may have an impact enough to change behavior and save some lives, and that's the ultimate aim," Murphy said.

City leaders have been looking at the issue in recent years.

Last year, the Milwaukee Police Department created a Traffic Safety Unit while ratcheting up enforcement.  Expanding traffic-calming measures — including roundabouts and traffic bumps — is also a focus for the city.

Milwaukee Mayor Cavalier Johnson went so far as to say reckless driving is a "public safety crisis," and made combating the problem a focus of his first 100 days in office.

When running for mayor, he unveiled his S.T.A.N.D. for Safer Streets Plan, which focused on engineering, enforcement and education to buck the trend.

"Going forward, drivers who chronically disregard our traffic laws will face consequences far beyond a slap on the wrist. That’s what the people of our city expect, and that’s what I expect," Johnson said in a press release.