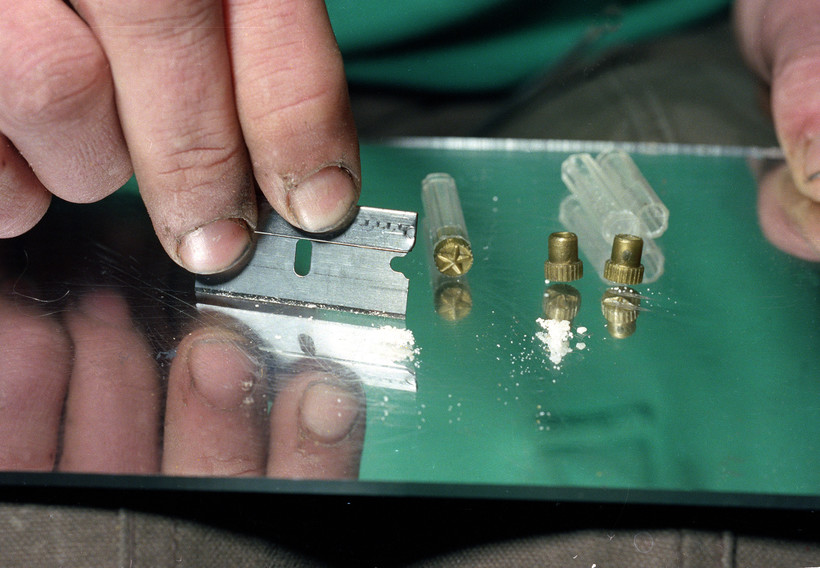 A razor blade is used to divide the contents of a five-dollar vile of crack, a smokable, purified form of cocaine, at a crack house in the South Bronx section of New York. Mark Lennihan/AP Photo

Milwaukee County Might See Small Dip In Overdose Deaths For 2018

There's a chance that opioid overdose deaths in Milwaukee County will either remain steady or see a small decline this year, but it will likely be months until the final numbers are reported, in part, because of how drug use has changed over the years.

Sara Schreiber, the office's forensic technical director, said while the number of overdose deaths are trending lower compared to last year, if there's a decline in overdose deaths in 2018, it will be a small one.

But the official numbers won't be tallied for months, Schreiber said, because of delays in getting toxicology reports back. In addition to the delays, Schreiber has seen an increase in the backlog of the laboratory tests because people brought to her office often have multiple drugs in their system at their time of death.

Schreiber said several years ago that it was common for one substance to be the culprit in a death.

"Some of this is related to fentanyl being used in combination both with heroin and now, as we're seeing it in combination with the stimulants like cocaine and methamphetamines," she said.

According to data from her office, the number of cases where both cocaine and an opioid or synthetic opioid were present increased five-fold between 2013 and 2017, from about 20 to almost 110 cases.

Schreiber said another pattern in overdose deaths, is cocaine's increasing involvement in deaths.

The federal Centers for Disease Control and Prevention released final overdose data this November. It reported more than 70,000 overdose deaths in the country in 2017, but provisional data for 2018 shows there could be a decline in progress.

Kari Lerch is with the Public Policy Institute of Community Advocates, one of several groups working to educate people on the dangers of opioid abuse and providing support to those struggling with addiction. She said she welcomes news of a potential dip.

"I think that this is far from over unfortunately. I think this didn't just happen overnight so there’s no silver bullet to change this issue. It's going to be continued years of work," she said.

Lerch said educating communities and medical professionals on opioid abuse will likely remain a priority in 2019.