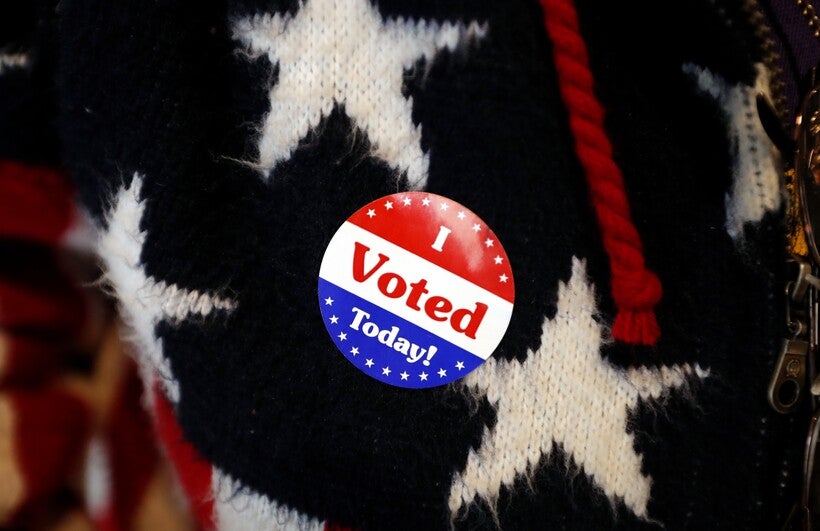 Maria Morahn, of Osceola, Iowa, wears a sticker after casting her ballot in the general election, Tuesday, Nov. 6, 2018, at the United Methodist Church in Osceola, Iowa. Charlie Neibergall/AP Photo

County Will Send Letters To Residents Who Could Be Purged From Rolls
By Corrinne Hess
Share:

The county’s board of supervisors voted 14-3 Thursday to double the budgeted $50,000 for voter registration. The county clerk and the Milwaukee Election Commission will also send direct mailings to potential purged voters with instructions on how to update their voter status.

The money will be used on an education campaign that could include advertisements on Milwaukee County buses and bus shelters, in movie theaters, local newspapers and on broadcast radio in advance of the 2020 election.

"We must do everything we can to protect the right to vote, especially in the wake of ongoing voter suppression efforts in Wisconsin," said board Chairman Theodore Lipscomb, Sr. "With these additional funds we can help ensure voters know their rights and are registered to vote."

Logsdon said she doesn’t believe the voter purge is being done to suppress voters.

"I know a group of people working on this list, and they have discovered 20,000 deceased people on this list already," Logsdon said. "By purging this list you are helping your city clerks. It’s a check and balance system."

The County Board spoke about the issue for nearly an hour, with almost every supervisor weighing in.

Supervisor Marina Dimitrijevic said Wisconsin’s possible voter purge has been a premeditated attack on thousands of people during one of the most important elections of our time.

"We will fight back and we will win," she said. "This is about democracy. In fact, this is one step to try to undo the harm that has been done. We’re going to make it as easy as possible for that constitutional right to be protected. That’s called expanding democracy."

After a whirlwind of action in January that included three Democratic members of the Wisconsin Elections Commission being held in contempt, a Wisconsin appeals court granted a stay on a ruling on purging voters from the rolls.

Supervisor Sequanna Taylor is one of the people among the thousands of voters flagged to be removed from Wisconsin’s voter rolls. 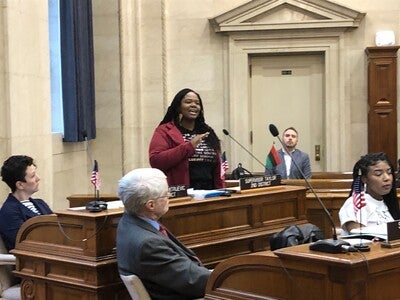 Milwaukee County Supervisor Sequanna Taylor is one of the thousands of voters flagged to be removed from Wisconsin’s voter rolls. On Thursday, Feb 6. she told colleagues that hearing they didn't support voter education was a "slap in the face." Corrinne Hess/WPR

On Thursday, Taylor said she moved and her driver’s license has her new address, and she registered to vote. She said she didn’t know she was on the voter purge list until a reporter told her.

After some of her colleagues suggested the voter rolls needed to be purged to prevent voter fraud, Taylor said she could no longer listen to the discussion.

She called the comments a "slap in the face," considering that earlier in the meeting there had been a presentation on Black History Month.

"When I stand up here and continue to hear people say 'Maybe this will happen or maybe that will happen' maybe just let them vote," Taylor said. "Especially when we talk about people of color who continually tell us they don’t want to vote because these policies and systemic policies are in place to keep them from voting."