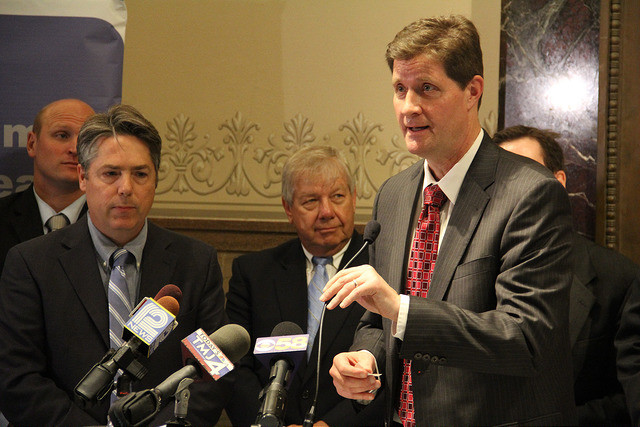 As health authorities across the nation continue to investigate the cause of lung illnesses linked to electronic cigarettes, two recent criminal cases in southeastern Wisconsin have shed light on the lucrative street market for counterfeit vaping products.

In mid-October, Milwaukee police reported finding nearly $1 million in cash and over 13,000 illegal vaping cartridges filled with THC oil at a home on Milwaukee’s south side. The discovery followed a Kenosha County case the previous month in which police seized about 129,000 vape cartridges.

Chisholm also briefly discussed whether his office would file hate crime charges in a reported acid attack Friday that gained national attention. Chisholm said his office expects to file charges Wednesday and it was looking at whether the crime was committed "in whole or in part" by the victim’s race.

Kealey Bultena: This summer, Wisconsin saw a rash of lung illnesses among people using e-cigarettes or other vaping devices. How did Milwaukee County law enforcement respond when people started showing up at hospitals?

John Chisholm: This is an emerging concern.

There's really two approaches. One is just sort of the traditional strict law enforcement. This is an illegal controlled substance. We're going to conduct a criminal investigation. And then there are the problems associated with regulation. And so this falls right in between the two, because the vaping products themselves are often legal. And it's not until they're modified in some way where they can't be regulated, they can't be controlled, that the problems crop up.

It's not dissimilar to what we've encountered with synthetic marijuana.

Last year, we had an incident where people (became) severely ill because the (drug) was contaminated with rat poisoning. It's always in that gray area — what is a legal product that is then modified in some way to make it illegal. It has unanticipated, unintended health consequence that is a real concern and could potentially lead to criminal liability for the people that engage in that activity.

KB: What has your office learned from investigating the people who supply these vaping products that contain THC?

JC: Because the product is legal, what will happen often times is the large number of legal products are going to be purchased in the states where they're legal. They're brought into Wisconsin, and then they're modified in some way that is potentially illegal.

They could be modified by putting a controlled substance into the product and sold that way. And it's generally then sold on the black market because it's always a cash-based industry. It always follows essentially the same trade route that other illegal substances follow.

It attracts the same problems. You become subject to, number one, putting out a harmful product that can't be sourced quickly and stopped if it's causing harm. But the other problem is because it's a cash-based industry, it tends to attract people that are also engaged in illegal activity like robbing drug dealers. In, for example, the recent seizure on the south side of Milwaukee, there was nearly $1 million in cash in this residential neighborhood. And it's far too common in our experience, for once that gets known out on the street, those individuals become targets of home invasions and robberies.

KB: You're looking to file charges against people in the production of these counterfeit vaping products. What movement have you been able to take there?

JC: Well, the approach is not dissimilar to what we would take with any other controlled substance. So in Wisconsin, there's a fundamental distinction between people who possess controlled substances, for example, for personal consumption and those who possess them with the intention of engaging in distribution and sale. And the assumption is with people in possession of the products, we generally are looking towards addressing that underlying addiction issue.

It's a whole different approach for people that are engaged in the commercial distribution of harmful products, because they're basically making the decision that they're going to put their personal profit ahead of the health and welfare of other people ...  So our approach to it is really to make a distinction between the people that are engaged in the unlawful distribution and sale versus those who are experimenting in using or addicted the controlled substance.

KB: I do wonder, with this recent rash of lung injuries and the apparent role that THC has played with these products, has that changed your view on marijuana legalization in Wisconsin?

JC: I think we have to have a very honest and very robust discussion that includes law enforcement, includes people from other states that have now legalized cannabis and have experience.

The thing that amazes me is that we tend to operate like we're in a bubble. And we know that Illinois has now legalized a certain amount of marijuana. Minnesota, Michigan — you're essentially creating a framework where you're going to have jurisdictions and surrounding states that have some form of either legalization or decriminalization. And it's going to create the same kind of dilemmas for law enforcement. How are you going to be consistent about this? How are you going to apply the law and an equitable way across the board? So it's a very legitimate concern of mine.

And I just fundamentally believe that one way or the other, we are moving towards a process that will eventually de-emphasize criminal investigation and prosecution, and move more towards a regulatory framework.

I think we should learn from what other states, both good and bad, have experienced when they've gone through this process. And let's hold a robust discussion. Bring in those experts, both public health experts, law enforcement, public school, community development — people who are looking at creating different forms of revenue for states and for individuals. Let's have that discussion and let's actually come up with a rational framework for addressing this problem instead of just waiting for bad things to happen and then reacting sometimes in ways that are more harmful than helpful. 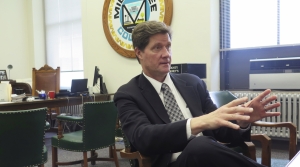 Milwaukee County District Attorney John Chisholm joins the program to discuss illegal vaping products amid heightened alarm over lung illnesses linked to e-cigarettes. We also catch up on law enforcement’s response to other drug-related concerns, such as opioids and methamphetamine.