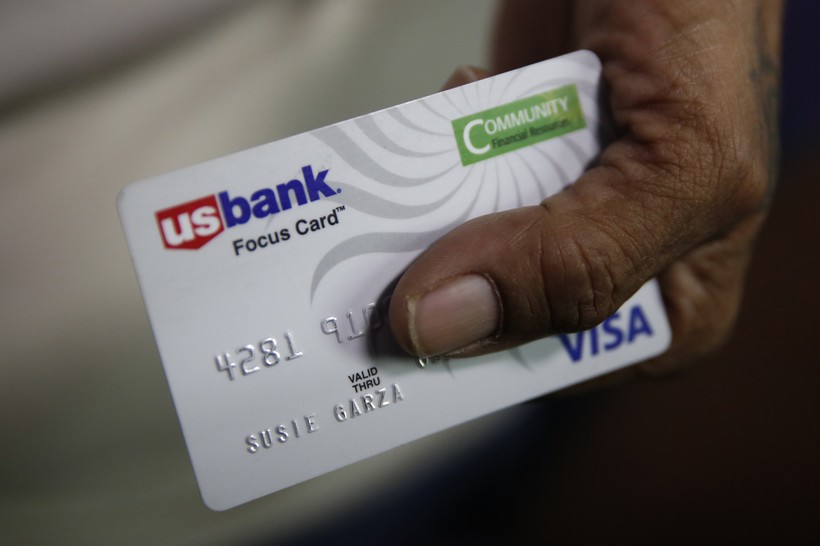 Susie Garza displays the city provided debit card she receives monthly through a trial program in Stockton, Calif. on Aug. 14, 2019. The program, which started in February, gives $500 a month to 125 people who earn at or below the median household income of $46,033. Rich Pedroncelli/AP Photo

Low-Income Families Could Receive $500 Per Month For 18 Months
By Corrinne Hess
Share:

Fifty low-income Milwaukee families could receive $500 a month for 18 months under a new pilot program being considered by the city.

SEED became the country’s first city-led guaranteed income initiative when it was launched in February. The program provides 125 Stockton residents a guaranteed income of $500 per month for 10 months. Last week, the Milwaukee Common Council’s Community and Economic Development Committee advanced its own guaranteed income plan.

"Our model is based off (the Stockton) model, but tweeked a little," said Alder Chantia Lewis, the program’s lead sponsor. "We’re including the working poor, and we want to walk with them, and allow them to have a personal financial coach, so we can lift them out of poverty."

In Stockton, there are no work requirements and no restrictions on how the money can be spent. To qualify, residents must be 18 years of age and live in Stockton neighborhoods designated to have an average income of $46,033 or below, which is the city’s median income.

Milwaukee's program will also be based on income, but the parameters have not yet been set.

She said less than 1 percent of recipients were unemployed and not looking for work, "dispelling the myth that if you give people money they are going to stop working," she said.

The federal poverty level in 2019 for a family of four was $25,750. Lewis said that giving a family $6,000 a year, is not likely to move them into a higher tax bracket or jeopardize other benefits they might be getting.

In Milwaukee, the median income is $40,036, according to the U.S. Census Bureau.

And while $500 a month isn't enough to live on, Samra said it could keep a single parent from having to take a second job.

"While there are some who are critical of models like this, we know that whatever models we have been using, have gotten us to where we are," said Alder Milele Coggs. "For very little investment, we have the opportunity for tremendous gain. It is worth the challenge to at least try."

The city adopted the framework for the program during the 2020 budget, but didn’t allocate any money. Lewis said private funds will be raised to start the program.

The Milwaukee Department of Administration will present a plan to the full Common Council in the coming months to advance the project.

Once it moves forward, eligible participants can apply and will be awarded on a first-come-first-serve basis. Lewis said she hopes to double or triple the amount of participants in the coming years.