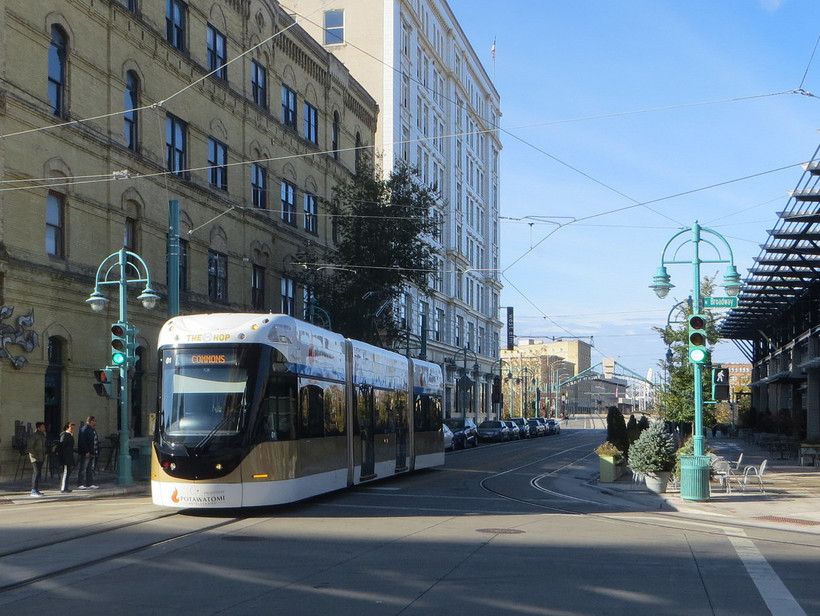 A Milwaukee committee decided to table their vote Tuesday on expanding the city’s streetcar route to the Wisconsin Center convention hall — a move that could jeopardize the project being completed in time for the Democratic National Convention next summer.

Milwaukee Mayor Tom Barrett announced the $47 million plan earlier this month that would add 2.4 miles to the 2.1-mile streetcar system known as The Hop. The expansion includes about a half-mile extension to Wisconsin Avenue, where convention facilities are located.

Barrett wants the extension complete in time for the 2020 Democratic National Convention.

After an hours-long discussion Tuesday, the city’s zoning committee said they are looking for a better proposal that includes more central city neighborhood programs to prevent gentrification and money from the business community, including the Milwaukee Bucks.

Those on the panel were also concerned the extension doesn’t extend far enough into Milwaukee’s Walker’s Point neighborhood, south of downtown.

Under Barrett’s plan, after the half-mile expansion to the convention center, the city will begin studying expanding into Walker’s Point, just south of the Historic Third Ward, and north into the city’s Bronzeville neighborhood.

"I want a better proposal that will affect the entire city, besides downtown," said Alderman Russell Stamper.

The extension would be paid for with money from property tax revenue generated from new development in six tax financing districts near downtown. The streetcar extension would cost $47 million. A public plaza connected to the city's convention center downtown would cost an additional $5 million, according to city plans.

The committee also questioned the city’s ability to pay for operating the streetcar in the coming years.

Currently, the $3.5 million annual operating costs are paid for through the federal Congestion Mitigation and Air Quality Improvement (CMAQ) Program. Potawatomi Hotel & Casino also has a sponsorship agreement with the city and is providing free rides through November. The CMAQ program provides $3.4 million a year. It expires at the end of 2020. No other sponsors have been secured, said Jeff Polenske, Milwaukee’s public works commissioner.

By tabling the vote, the full Common Council will not discuss expanding the streetcar at its next meeting on May 29 unless a special meeting is called before the full council meeting.

Polenske said the delay could mean the city won’t make the deadline of opening the extension in time for the DNC in July 2020.

"This is a big project," Polenske said. "One element to the project does have a critical time frame. Certain building materials require certain time frame. We do need to act on that now."

But the committee didn’t balk, saying if project deadlines aren't met, it's the administration’s fault.

"I’ve been urging the mayor to start on final design for two years," said Alderman Robert Bauman. "Now the DNC is coming, and we have a lot to think about it. We could have handled this in an organized and calm way. But oh no. We’re last-minute. If we don’t do this, it’s totally, 100 percent on you."

Before the vote, several people in the community testified in favor of the expansion.

Deshea Agee, executive director of the Historic King Business Improvement District, located in Bronzeville, said the streetcar extension doesn’t solve all the city’s problems but it creates an opportunity for economic development in certain neighborhoods.

Due to a reported glitch numbers weren't released in February and March. Ridership in April was 55,558.