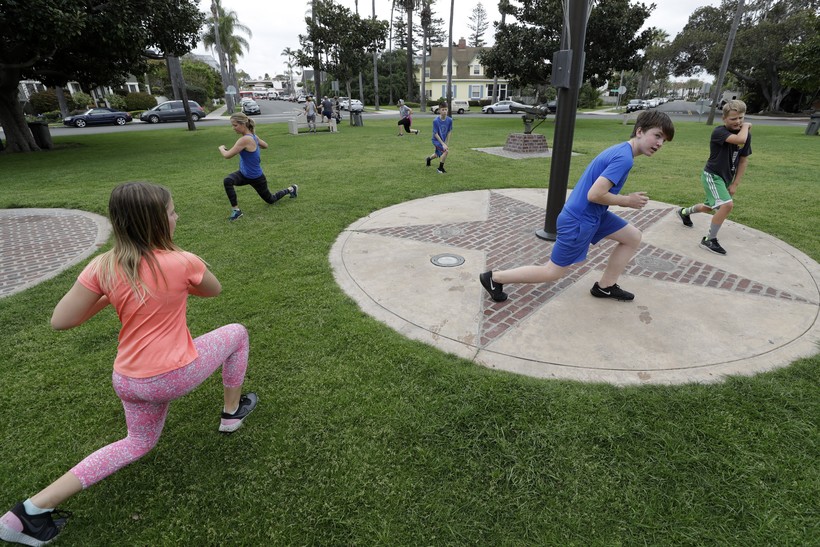 Kids join their parents in a workout in the park Monday, March 16, 2020, in Coronado, Calif. A local gym moved their class outdoors as kids staying home from school due to coronavirus concerns joined the group Monday. The vast majority of people recover from the new coronavirus. According to the World Health Organization, most people recover in about two to six weeks, depending on the severity of the illness. Gregory Bull/AP Photo

'These are our youth, and they're only going to be as great as we can help them be'
By Madeline Fox
Share:

Milwaukee Bucks forward Wesley Matthews might be best known for playing basketball, but when he thinks about his time playing sports at Madison's Memorial High School, it's soccer that comes to mind first.

Matthews said soccer has also helped him bond with his Bucks teammates.

Matthews is helping the Madison Public Schools Foundation raise a minimum goal of $250,000 to fill the gap between what Madison schools' budgets can cover and what they need to offer an up-to-date, comprehensive P.E. class and reduce financial barriers to participating in school sports. He's seeding the fund with $50,000 of his own money and matching up to an additional $50,000.

The fundraiser is called "Play Every Day."

"Play and movement are so fundamentally important to happiness and doing well," said Melinda Heinritz, president of the foundation. "Part of this too is ensuring that our kids have a good K-12 experience around physical activity, but also trying to build habits of a lifetime."

Heinritz said the foundation was thinking about the statistic that teachers spend $500 to $1,000 of their own money on supplies when it was trying to narrow down where to focus the next initiative. After input from teachers, organizers honed in on physical education.

"That phys ed teacher taking the time to participate opened our eyes to: there are other kinds of supply gaps that we wouldn't even have thought of if we hadn't brought teachers in to tell us about what this looks like on a day-to-day basis for them," she said.

Heinritz said they heard about teachers having to use beach balls to teach soccer because they'd ordered soccer balls that hadn't arrived, and other equipment barriers that made it hard to get students involved in sports.

Physical education also felt like an important place to focus attention, and dollars, after the pandemic disrupted traditional education and play in a lot of ways, said Matthews and Heinritz. Many public playgrounds around the state closed in the early months of the pandemic, when scientists hadn't yet determined that COVID-19 wasn't easily spread over surfaces. Schools kept P.E. classes during virtual learning, but they tended to look different, since they were based around things kids could do on their own or without any gym equipment.

"A lot of socialization skills and a lot of interaction — everything that we do on the day to day — a lot of these kids did not get to receive, so the importance of it now, I think, is even grander because you're trying to make up for a window that you can't necessarily get back," said Matthews. "I think now it is even more important to...interact, to engage."

Matthews said the recent devastation of the mass shooting in Uvalde drove home for him how much communities need to rally around their schools, and make sure students have everything they need to thrive.