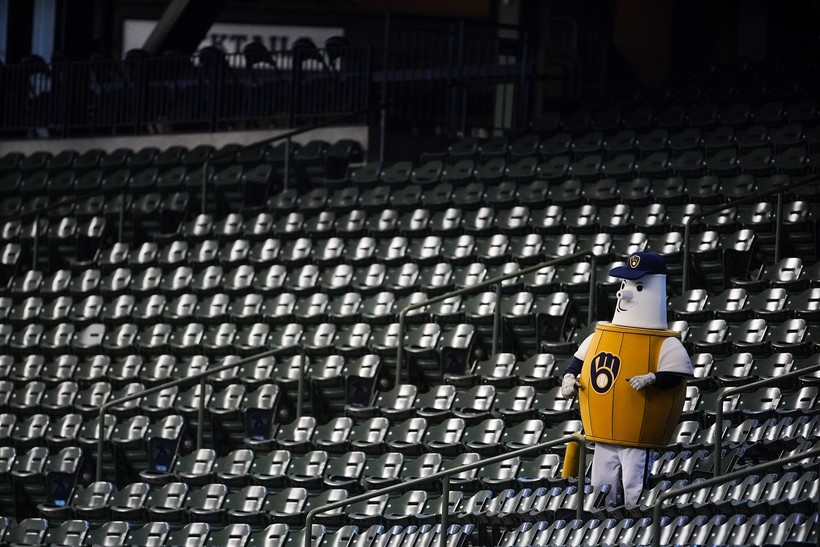 A Milwaukee Brewers mascot cheers in the empty stands during the fourth inning of a baseball game against the Chicago White Sox Tuesday, Aug. 4, 2020, in Milwaukee. Morry Gash/AP Photo

The Milwaukee Brewers will allow fans to attend regular season home games for the first time in 18 months.

The team made the announcement Thursday morning. According to the release, the city's health commissioner approved the team's plan to begin the regular season with the stadium at 25 percent of total capacity. Team officials say that equates to more than 11,000 fans.

Opening Day at American Family Field is set for Thursday, April 1. The Brewers will play the Minnesota Twins.

Brewers season ticket holders and suite holders will be contacted about attending games in the next week.

"What we're communicating to them is their reassigned, relocated seat locations, which we hope are temporary," said Rick Schlesinger, the Brewers' president of business operations, during a press conference.

It's a bit of a chess board, figuring out how spectators will socially distance at American Family Field, but the team expects individual tickets will ultimately be available for most home games, he said.

In addition to pod seating, the Brewers are implementing other safety precautions including a mask requirement, ticketless entry and strict limits on bags in the stadium. The team will also keep the roof open whenever weather permits, Schlesinger said.

Originally the team proposed hosting fans at 35 percent capacity, and the Brewers are still hopeful that will happen over the course of the season.

"I did point out to the health department that we've got a Cubs series coming up in mid-April, and it's always good to have more fans rooting against the Cubs at American Family Field," Schlesinger said.

For now, tailgating won't be allowed at the stadium. Schlesinger said it's difficult to enforce strict coronavirus safety precautions outside the field.

"I think everybody understands how important tailgating is to the culture of our fans, and it's certainly sort of symbolic of baseball in Milwaukee, and I will tell you, the folks in the health department are not unaware of that," he said.

But it can be tough to prevent a four-person tailgate from turning into a 40-person event, he said.

At their Spring Training games in Arizona, the Brewers are hosting a limited number of fans. So far, spectators have been following the rules and players have enjoyed having an audience, Schlesinger said.

In early February, Milwaukee eased its COVID-19 restrictions to allow venues to host events at 25 percent capacity, or a maximum at 250 people. However, venues can apply to host larger crowds.

The Brewers' proposed safety plan was 500 pages long, according to Schlesigner. Health officials toured American Family Field and shared feedback with the team, he said.

Milwaukee uses five gating criteria, updated every Thursday, to determine when the city should scale back its coronavirus restrictions: case positivity, testing numbers, hospital capacity, personal protective equipment supply and contact tracing. Each criterion has been labeled either green for "excellent" or yellow for "proceed with caution" since mid-January.

The Milwaukee Bucks began hosting paid fans at Fiserv Forum on Feb. 21. So far, the Bucks have welcomed about 1,800 people to each game, but the team hopes to increase that number, according to a news release. The team has implemented a number of new safety precautions including staggered entry times and mandatory COVID-19 rapid testing for anyone seated within 30 feet of the court.

On Saturday, Marquette University will host fans at its final regular season men's basketball game. The game will be held at Fiserv Forum, and attendance is by invitation only. The team will celebrate Marquette Day and Senior Day.