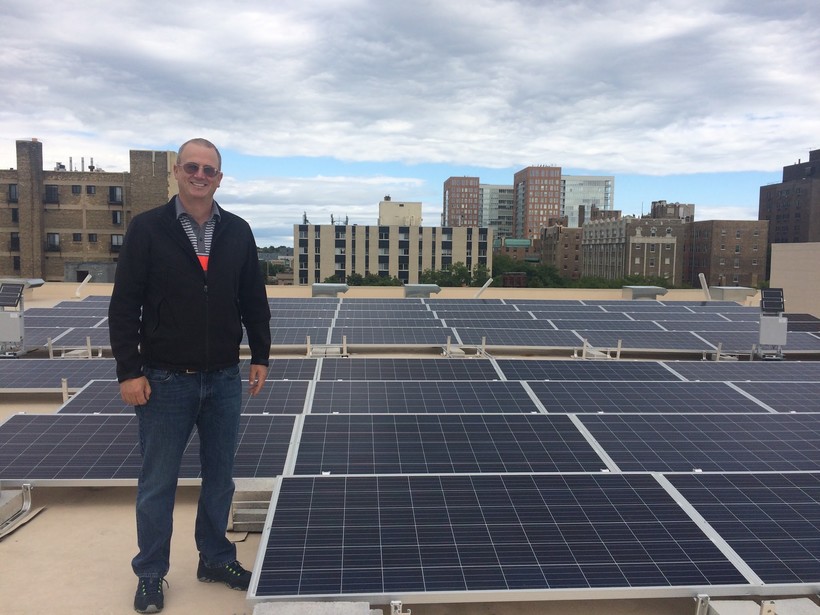 Mike O'Connor stands next to the solar panels atop the Sage on Prospect apartment building, 1825 N. Prospect Ave., that has 96 solar panels are providing electricity to about 30 tenants.

The solar panels, a meter and other equipment at the Bendixen-Ferschinger home are only two months old after the two signed up for an organized solar bulk-buy program this summer.

The declining cost of solar panels and their greater efficiencies were part of the attraction, Bendixen said. The roughly 20 percent savings from guaranteeing a contractor a large amount of work and cutting some of the installer's costs was a bonus, he said.

"They've been doing a group buy for a couple of years now," Bendixen said. "Every year, I've gone to every session. I run the numbers because I want to do it, but it also has to make sense, and this is the first year I really thought it made sense and this is the year we should try to do it." Participating in bulk solar buys may be a solution for people who want to add solar panels to their homes or businesses but are leery of the cost.

Dozens of people are joining together and getting a discount from installers, including people living in the Milwaukee area, by participating in solar group-buy programs organized by Midwest Renewable Energy Association, the city of Milwaukee and the village of Shorewood.

The fact that Milwaukee is backing the group buy helped Ferschinger and Bendixen decide to participate, Ferschinger said.

"It shows that it's priority to the city and starts the conversation in the community,"  Ferschinger said, adding that any neighborhood could take part in such an opportunity.

Their house is still on the grid, using electricity and natural gas from a local utility company. The couple hopes the payback on their solar investment will be eight years or less.

Elizabeth Hittman coordinates sustainability programs for the city of Milwaukee and has helped streamline the permit process for group buys.

While she's trying to spread group solar across the area, the practice is not for everyone, she said.

"If you have too much shading on your roof, or you're a renting a home and your landlord isn't interested, that wouldn't really be an option for you," Hittman said.

Some homeowners also can't afford solar, with the cost of a typical residential project coming in at about $5,000 to $7,000 after tax credits. Costs and discounts depend on the number of people who participate in the group buy, the size of a home and other details.

A standard system of about 3 kilowatts that isn't through a group-buy program costs between $10,500 to $12,000, Hittman told the Milwaukee Journal Sentinel. Meters at the home of Quintin Bendixen and Jamie Ferschinger's in Milwaukee's Bay View neighborhood. ChuckQuirmbach/WPR

A just-completed group buy of solar power in the Milwaukee area may have been the state's largest, according to the MREA.

The Midwest Renewable Energy Association reports that about 50 people have signed up for the group buy that ended earlier this month, including some business owners.

On the roof of the five-story apartment building Sage on Prospect, 96 solar panels are providing electricity to about 30 tenants.

Mike O'Connor is co-owner of the building, located at 1825 N. Prospect Ave. O'Connor said the cheaper-to-operate solar will pay off for him.

"The savings goes to me, the landlord," O'Connor said. "And that's really the concept that I think is the most powerful one, that if I can get across to other landlords and developers out there that they can make money by being green, they'll probably be interested in doing that."

The building owner has not only added solar panels to the apartment building, he's also joined the group buy to put solar on his suburban home.

Electric utility companies have said the mini-surge in solar homes has forced them to raise fixed rates on utility bills. They claim most solar users still need electric wires and other infrastructure, and should help pay for them. The higher charges have made some people question switching to solar. But ultimately, Peter Murphy of the Midwest Renewable Energy Association, said MREA plans to coordinate more group buys because people want more control over their power supply.

"Democratization, de-centralization, so when you own your own solar panels, you're basically your own little power plant," Murphy said.