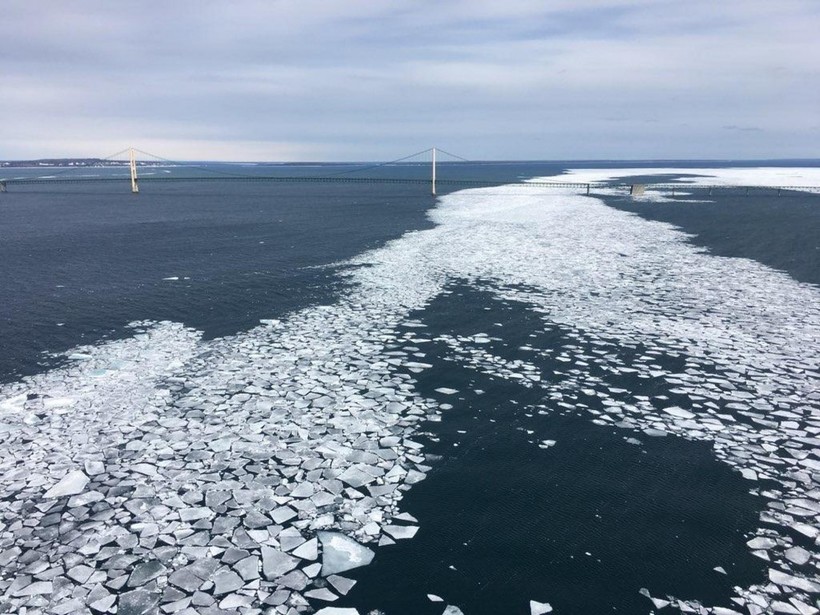 The Straits of Mackinac is the site of an underwater section of a pipeline operated by Enbridge Inc. Photo courtesy of the U.S. Coast Guard

Lawsuit Aims To Stop The Flow Of Oil Through Line 5 In 180 Days
By Danielle Kaeding and Associated Press
Share:

Michigan Gov. Gretchen Whitmer has taken legal action that aims to shut down a pipeline that carries oil and natural gas liquids under the Straits of Mackinac, which links Lake Michigan and Lake Huron.

Michigan Attorney General Dana Nessel filed the lawsuit on behalf of Gov. Whitmer and state Department of Natural Resources Director Dan Eichinger on Friday. Whitmer and Eichinger notified Enbridge, Inc. that the state was seeking to revoke and terminate an easement granted in 1953 for operation of its Line 5 pipeline. The pipeline carries around 23 million gallons of oil and natural gas liquids per day from Superior to Sarnia, Ontario.

The lawsuit cites the Public Trust Doctrine and repeated violations by Enbridge as grounds for revoking the agreement.

"I commend Gov. Whitmer and Director Eichinger for their forceful actions today to address the grave threat posed by Enbridge’s unlawful operation of its pipelines in the Straits of Mackinac," Nessel said in a statement. "With the steps they took today, Gov. Whitmer and Director Eichinger are making another clear statement that Line 5 poses a great risk to our state, and it must be removed from our public waterways."

The lawsuit seeks to stop the flow of oil through Line 5 within 180 days.

Enbridge said in a statement that there is "no credible basis" for Whitmer's action.

"Line 5 remains safe, as envisioned by the 1953 Easement, and as recently validated by our federal safety regulator," said Vern Yu, an executive vice president with the company. "We will continue to focus on the safe operation of the dual Line 5 pipelines at the Straits of Mackinac, ensuring the Great Lakes are protected while also reliably delivering the energy that helps to fuel Michigan’s and the region’s economy."

Enbridge reached an agreement to replace Line 5 under Republican Gov. Rick Snyder's administration. The company has been trying to obtain permits to build a roughly $500 million tunnel that would house a new pipeline.

Environmental and tribal groups have urged the Whitmer administration to shut down the Line 5 pipeline, citing the line's age and the company's 2010 oil spill in Michigan's Kalamazoo River. More than 1 million gallons of oil were recovered, costing Enbridge more than $1.2 billion to clean up.

Enbridge has also been seeking permits to reroute Line 5 in northern Wisconsin south of the Bad River tribe's reservation. Last year, the tribe filed a lawsuit aimed at shutting down operation of the pipeline across its reservation.