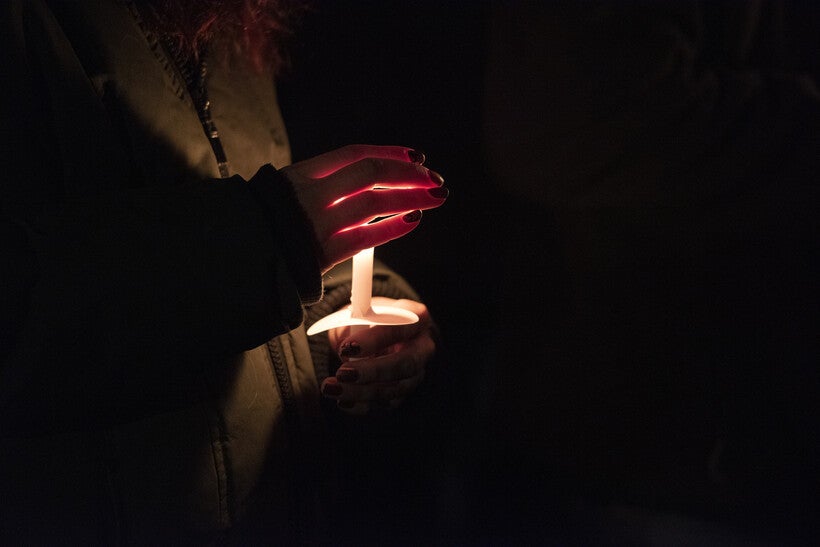 An attendee covers the flame of a candle with their hand Monday, Nov. 22, 2021, in Waukesha, Wis. Angela Major/WPR

As the Waukesha community continues to cope with trauma following six deaths and more than 60 injuries after a man drove an SUV through Sunday's holiday parade, mental health experts are offering new ways to get help. They say it's important for people to seek out counseling resources, especially during a time of year when feelings of loss, stress and sadness can be amplified.

With each passing day, new information about the Waukesha parade tragedy unfolds. Whether it be updates on deaths, injuries or the criminal charges brought against the suspect, Darrel Brooks, each new bit of information is a reminder of the violence that came to the city on what was supposed to be a joyous occasion.

City, state and national figures have offered their condolences, thoughts and prayers. Local organizations have raised hundreds of thousands of dollars for victims and mental health professionals have been sharing new and existing resources to help people process grief.

On Monday, Children's Wisconsin hospital in Milwaukee launched a new Mental and Behavioral Health Helpline (414-266-6500) for people and families seeking support. A spokesperson for the hospital told WPR that as of Tuesday afternoon, the hotline had received dozens of calls.

Haley Miller is a licensed social worker and behavioral health consultant at Children's Wisconsin who has worked the crisis line for the past two days.

She said they've gotten calls about how to talk to children about what happened, but added that adults are also wondering about their own feelings.

"We've had a lot of people calling in asking if their emotions are normal that they're experiencing, whether that's completely shutting down and not wanting to get out of bed or feeling really numb about it," said Miller. "And we also have been working on supporting people in getting resources that they might need."

Miller said it's completely normal to feel numb in the wake of trauma.

"Our bodies and our brains are not meant to handle this amount of trauma," said Miller. "With social media, we have more exposure to trauma from all around the world that we've never had before. And so our brains and bodies are not programmed to manage all of the stress."

When talking with children, Miller said parents should ask them questions about what they know about Sunday's tragedy or what they've heard from classmates. She said it's best to keep things general and not wade into graphic details.

A spokesperson for the national Substance Abuse and Mental Health Services Administration told WPR the Disaster Distress Helpline has received 75 calls from Wisconsin area codes between Sunday and Tuesday afternoon. One week ago, the helpline got three calls from Wisconsin area codes. SAMHSA reported 31 text chats from Waukesha between Sunday and Tuesday afternoon as well.

And the timing of Sunday's senseless tragedy may make it more challenging for people to process.

According to a press release from the National Alliance on Mental Illness, a 2014 survey by the organization found that around 24 percent of people with a diagnosed mental illness reported that winter holidays make their condition "a lot" worse and 40 percent said holidays make conditions "somewhat" worse.

The survey also found that 755 respondents noted the holidays contribute to feelings of sadness or dissatisfaction. Of those, 68 percent felt financially strained, 66 percent experienced loneliness and 63 percent reported feeling too much pressure.

More than half of U.S. residents will be diagnosed with a mental illness or disorder at some point in their lifetime, according to the U.S. Centers for Disease Control and Prevention. One in five adults will experience mental illness in a given year.

But research also shows there is an average 11-year gap between mental health symptoms and treatment. Among adults, there are wide disparities in who seeks and receives treatment, according to the National Alliance on Mental Illness.

Abir Bekhet is a professor at Marquette University's College of Nursing specializing in holistic stress management. She told WPR there have been many provoking situations over the past two years during the COVID-19 pandemic and the holiday parade attack has only added to the list.

"But the good thing is, we have many resources that we can use that we may be unaware of such as seeking help from others or making a better use of our time," said Bekhet.

She reiterated that anyone dealing with mental health issues needs to reach out to others for help.

"It's important that you take the initiative to seek out help from close friends and family, because if you don't, you may appear to be handling things just fine, and they may not notice that you could really use or need their help," said Bekhet.

She said Thanksgiving and other winter holidays are a perfect time to gather with others, talk and recharge.

People dealing with stress or grief should also devote more time for self-care, break big tasks into smaller ones and engage in regular, positive self-talk.

"So, positive self-talk involves choosing an optimistic rather than degrading internal voice or an example of what people might try when we face the stressful situation," said Bekhet. "I can tell myself, 'I can go through this, I can manage it.'"

Bekhet said social stigma surrounding mental health has long been an issue, but it's getting better, especially among younger generations.