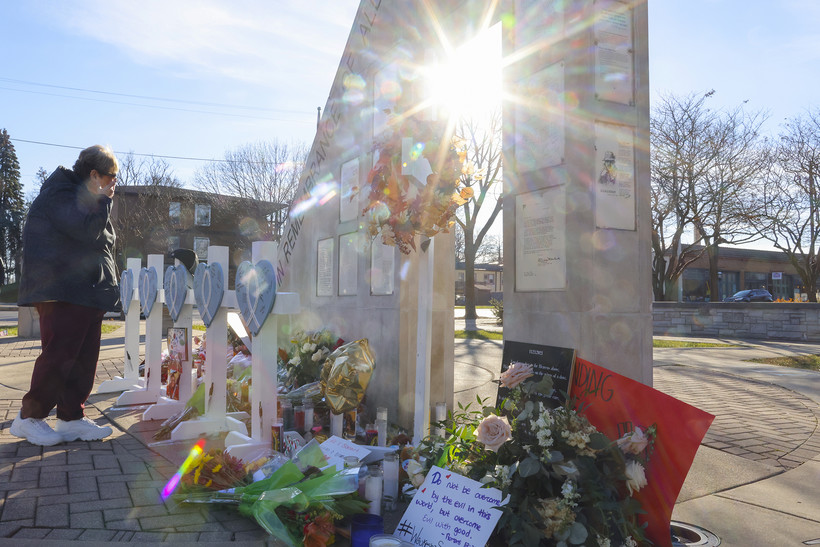 A woman who did not want to be identified cries at a memorial in Waukesha, Wis., Tuesday, Nov. 23, 2021. She had a daughter who marched in the parade and witnessed the incident. On Sunday an SUV plowed into a Christmas parade killing five people and injuring several more. Jeffrey Phelps/AP Photo

'Doing what they loved': Waukesha remembers the victims of parade attack ranging in age from 8 to 81

An eight-year-old boy, a bank teller with the "biggest heart" and a choreographer for a troupe of dancing grannies are among those who died when a man drove an SUV into Waukesha's annual Christmas parade Sunday night.

As the community attempts to heal, people are remembering the six people who were lost.

Eight-year-old Jackson Sparks died from injuries Tuesday afternoon, according to an update shared on a GoFundMe page for the family and the family's church.

Jackson and his 12-year-old brother Tucker were both hospitalized at Children's Wisconsin according to the GoFundMe page, which was set up by a family member. Both children were described as being seriously injured, and said Jackson underwent brain surgery Sunday evening.

"Tucker, by the grace of God is miraculously recovering from his injuries and will be being discharged home," an update on Tuesday read. "This afternoon, our dear Jackson has sadly succumbed to his injuries and passed away."

In the update, Jackson's parents, Aaron and Sheri Sparks, passed along their thanks the community for their support and asked for privacy as Tucker heals and their family mourns.

Jane Kulich, 52, was a teller at Citizens Bank in Waukesha and was walking with the bank’s float in the parade.

According to a post on the Citizens Bank Facebook page, Kulich was a mother and grandmother. She had worked at the bank for just over a year and "shared her bright spirit with everyone around her," the post reads.

Jennifer Boldon, a former coworker from Kulich’s previous job at Klinke Cleaners, said Kulich had "the biggest heart out there."

"She was like our work mom. Like always had a smile, she would be there for anybody," Boldon said.

Boldon said she remembers Kulich always being willing to listen and offer her advice.

"She went through a lot of things that I was going through when she worked here. And it was just nice to have somebody to talk to and like the good advice through it," Boldon said.

She said Kulich’s children and grandchildren "were her world" and family was always important to her.

In a post on Facebook, Kulich’s daughter Taylor Smith said "there are no words" for the loss of her mom.

"We are told she didn't suffer. Thank God. I'm so grateful I got to have her this long, but damn. She was walking in the parade last night. She was so happy," Smith wrote in a Facebook post.

Citizens Bank has started an online fundraiser for Kulich’s family. A neighbor has also started a GoFundMe page.

Three of the victims from the parade were members of the Milwaukee Dancing Grannies, a dance group for grandmothers that performs at regional parades.

Another victim was Wilhelm Hospel, 81. He was the husband of a Dancing Grannies member and a volunteer for the group, according to the Milwaukee Journal Sentinel.

In a post on the Dancing Grannies’ Facebook page on Monday, the group said their "hearts are heavy" over the losses.

"Our injured grannies are in stable condition with one being released from the hospital Monday. The outpouring of prayers, messages and sentiments sent to the grannies over this devastating loss have touched us deeply," the post said.

A previous post said the group was "doing what they loved" at the parade, getting to perform and putting smiles on peoples' faces.

"While performing the grannies enjoyed hearing the crowds cheers and applause which certainly brought smiles to their faces and warmed their hearts," the post said.

Tamara Durand, 52, was a former elementary school teacher for the Beaver Dam Unified School District and a member of St. Jerome Parish in Oconomowoc.

The Milwaukee Journal Sentinel reported that the parade on Sunday was Durand’s first event with the Dancing Grannies. Her husband, David Durand, told the paper that she "danced her way through life."

LeAnna Owen, 71, managed an apartment complex in Cudahy, according to the Milwaukee Journal Sentinel.

In an interview with CBS 58 in Milwaukee, Owen said she had no problem keeping up with the dance group and was always encouraging her fellow Dancing Grannies.

"We all truly, I think, love each other too. We’re like sisters," Owen said in the interview with reporter Winnie Dortch.

Owen said in the interview that she enjoyed getting to know the other Grannies and their families, and the moments of recognition from the community. She shared a memory of a trip to Door County with other members of the group when they were recognized by a group of children.

"A whole bunch of them got up and came over and started talking to us. And it was kind of like, 'Oh, we’re kind of like minor celebrities,'" Owen said in the interview.

Virginia Sorenson, 79, known as Ginny, lived in Muskego and was choreographer for the Dancing Grannies for 19 years.

Her Facebook page describes her as a mother of three and grandmother of six and a nurse coding specialist at Village at Manor Park.

In the interview with CBS 58, Sorenson said she was no longer able to dance but had found fulfillment in choreographing for the Grannies.

"The Dancing Grannies had a place for me here in choreography and being an instructor. That's a really important part of my life, especially now where I can’t dance," Sorenson said in the interview. "I love it and I love the ladies. They’re my family, they’re my friends."