Editor's note: This story contains language and descriptions some may find offensive.

Five University of Wisconsin-Eau Claire football team players have been suspended from the team after being accused of using the social media platform Snapchat to convey racist messages that appeared to target a campus black empowerment organization.

Snapchat posts that began making the rounds Tuesday evening showed an image of crosses burning and Klu Klux Klan members in the background posted by a user who wrote, "For all who can't make the BME (Black Male Empowerment) meeting, (we) are holding WME tonight at 7." 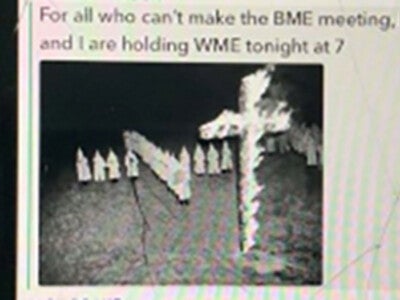 Posts made on a private chat allegedly between football players on the social media site Snapchat. Courtesy of Jalen Thomas.

Another commenter replied in the thread, referring to another individual user as "the grand wizard," a title given to KKK leaders in the Reconstruction Era.

University chancellor Jim Schmidt wrote on Twitter Tuesday night that, "Our campus will not tolerate this racist action. I have asked the Dean of Students Office to investigate and take appropriate action."

In an interview Wednesday with Wisconsin Public Radio, Schmidt called the incident "despicable and horrible" and said the Dean of Students Office immediately began an investigation after learning about the incident.

UW-Eau Claire has said it will not identify which students have been suspended from the team. Attempts to reach several members of the UW-Eau Claire football team were not returned Wednesday afternoon.

Schmidt said he has heard from numerous groups on campus as well as faculty and staff, noting that this incident has caused a "great deal of damage to several different minority groups." He said the disciplinary action to suspend the players was taken by the athletics department, and said the football team met Wednesday afternoon to start a dialogue about the harm this incident has caused.

No academic discipline will be taken until an investigation is completed, Schmidt said.

"WME" is not an actual campus organization, but some, including BME vice president and UW-Eau Claire senior Jalen Thomas, 24, speculate it's a play on his group's name meaning White Male Empowerment.

"That's the first thing I thought of when they said that," said Thomas.

The mission of BME, Thomas said, is to change the narrative of black men on campuses and forge a bond between members of the group. Anyone is welcome to attend.

"We just want that same respect back, and we would like to not be mocked by the students who we once considered friends," he said.

The Snapchat incident comes on the heels of a racist note left on a UW-Eau Claire student's dorm room door in September, telling her to "Go back to the rez Red (N-word.)" Wisconsin Public Radio is choosing not to use the full racial slur.

Schmidt said although the Dean's Office has requested the help of the campus police department to identify who is responsible for the September incident, no one has been identified.

Thomas said a noteworthy difference between the two racist incidents is that the perpetrators in this case are not anonymous, and he believes an example should be made of the students' behavior.

"We can't allow this type of thing to happen on campus," Thomas said. "People think that it's OK or that they can joke about these things privately, and then they can keep doing that. I think an example should be made. I don't know what that example is, but I don't think it should just be a regular slap on the wrist."

Editor's note: This story has been updated to include comments from University of Wisconsin-Eau Claire chancellor Jim Schmidt.