Editor's note: This story includes language some may find offensive.

A racist note written on a University of Wisconsin-Eau Claire student's door over the weekend is drawing rebuke from campus administration, which is calling for a full investigation.

On Sunday, UW-Eau Claire junior Kayde Langer woke up to a racist message left on her door, according to UW-Madison's student run newspaper, The Daily Cardinal. In a tweet Sunday, Langer shared a photo of the racial slur and captioned it, "Welcome to the a University of Wisconsin-Eau Claire."

The message on Langer's door read: "Go back to the rez Red N-word." 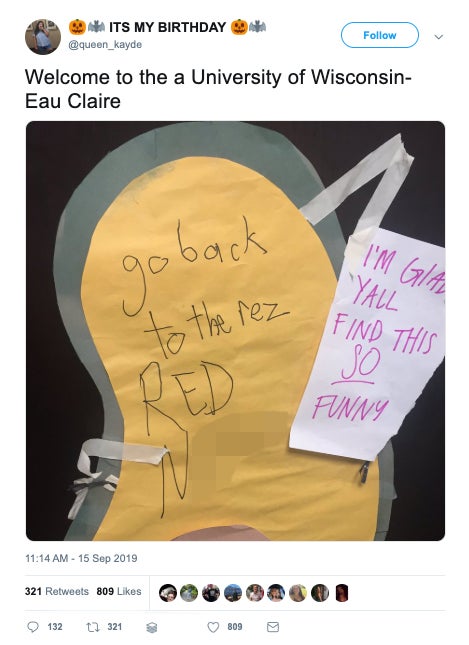 UW-Eau Claire junior Kayde Langer, who woke up to a racist message left on her door, tweeted a photo of the slur on Sunday, Sept. 15, 2019. This photo has been edited to remove the N-word.Screen shot of Kayde Langer's tweet

Wisconsin Public Radio is choosing not to use the full racial slur.

In her Twitter profile, Langer identifies herself as Red Lake Ojibwe and vice president of UW-Eau Claires’s Inter-Tribal Student Council.

On Sunday evening, UW-Eau Claire Chancellor Jim Schmidt retweeted Langers photo and wrote, "There is no place for hate speech @UWEauClaire. The racist who wrote this despicable comment is not welcome on this campus."

On Monday, Schmidt sent out a campus-wide email saying he has directed the campus Dean of Students Office to conduct a formal investigation.

"This kind of racist slur is simply antithetical to who we are as a university that values equity, diversity and inclusion," Schmidt wrote. "When a member of our Blugold Family is targeted, we are all impacted and called to speak with one voice against bigotry, discrimination and intolerance."

In an interview with The Daily Cardinal, Langer said previous experiences on the UW-Eau Claire campus had been ignored.

According to the paper, Langer will be filing a formal complaint about the incident through UW-Eau Claire's Bias/Hate Incident Response Team process.