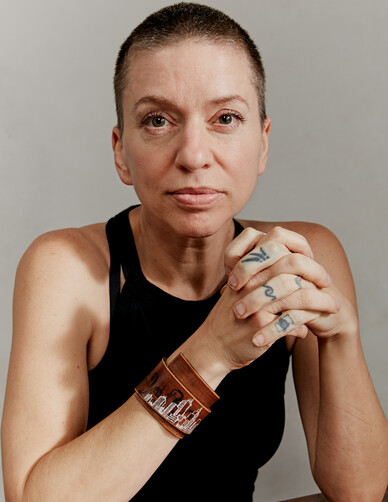 Singer/songwriter/feminist/activist/author Ani DiFranco will perform in Madison on November 5th at the Overture Center. DiFranco is celebrating the 25th Anniversary of her seminal first live album, Living In Clip,and her label Righteous Babe Records is currently offering a 25th anniversary remastered edition of the landmark double album. This marks the first time the breakthrough recording is available on vinyl (3 LPs), and includes a new album cover and never previously seen photos of Ani, her band and crew from that era. Twenty-five years later, the album is recognized as a point of entry that radically expanded DiFranco’s audience, and a historically important testament to the relationship between Ani as a live performer and the devoted community she created with her fans.  Listen to "Napoleon" from Living In Clip  HERE.

You can find details & tickets for the show HERE.

Additonally,  DiFranco makes her children’s book debut with THE KNOWING, out March 7, 2023, released by Penguin Kids. The book encapsulates ideas that DiFranco feels strongly about sharing with her own children and all children: the authority to respect the world around you with love and compassion, and the strength of individual power and collective responsibility. DiFranco says, “I always relish a new challenge and creative adventure in life. Making a book for young readers was one such. I’m hoping young people will connect with the message I am sending out in this book – that underneath all the labels and social and cultural signifiers, we are spirit, we are love incarnate, we are one.” For more info and to pre-order THE KNOWING, go HERE.

Widely considered a feminist icon, Grammy winner Ani DiFranco is the mother of the DIY movement, being one of the first artists to create her own record label in 1990. While she has been known as the “Little Folksinger,” her music has embraced punk, funk, hip hop, jazz, soul, electronica and even more distant sounds. Her collaborators have included everyone from Prince to legendary R&B saxophonist Maceo Parker to Utah Phillips. She has shared stages with Bob Dylan, Bruce Springsteen, Pete Seeger, Kris Kristofferson, Greg Brown, Billy Bragg, Michael Franti, Chuck D., and many more. Her memoir No Walls and the Recurring Dream was released in May 2019, and DiFranco released a No Walls Mixtape alongside the book, offering a new take on songs related to the memoir. Her last studio album was 2021’s Revolutionary Love.

Ani's Madison show will be opened by her labelmates The Righteous Babes Revue featuring Gracie and Rachel, Pieta Brown, and Jocelyn Mackenzie. More information on the fall tour and Ani's special guests can be found HERE.