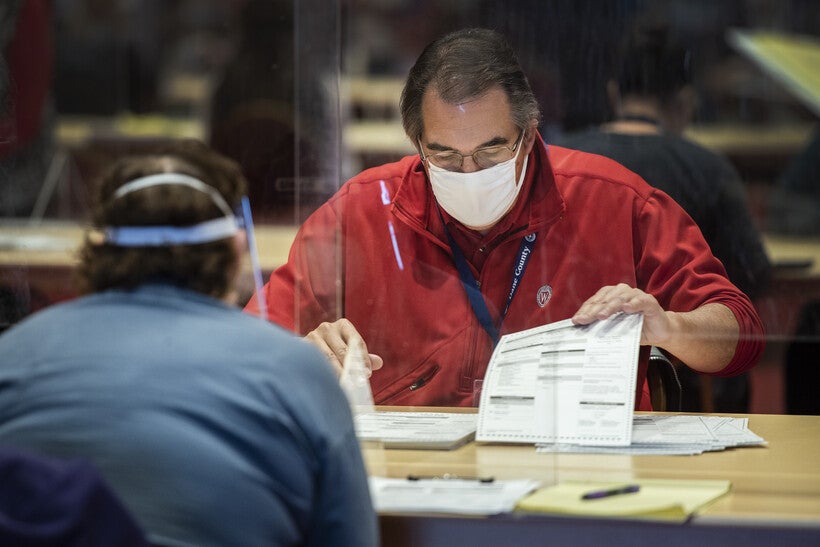 A worker looks at ballots at a table with plexiglass dividers Saturday, Nov. 21, 2020, at Monona Terrace in Madison. Angela Major/WPR

Mayors in several of Wisconsin's largest cities received subpoenas on Wednesday to provide information to a GOP-backed investigation of the 2020 election in the state.

Former conservative state Supreme Court justice Michael Gableman, who is leading the probe, told the Green Bay Common Council on Tuesday evening that a subpoena had been delivered — or would soon be delivered — to Green Bay Mayor Eric Genrich, as well as the mayors of Milwaukee, Madison, Racine and Kenosha. Several of those mayors confirmed receipt of subpoenas on Wednesday.

Those cities, the five largest in Wisconsin, shared a $6.3 million election administration grant from the Center for Tech and Civic Life, a group founded by Facebook CEO Mark Zuckerberg and his wife, Priscilla Chan. The grants have come under sharp scrutiny from Republicans, who argue they enabled too much outside influence over how elections were run.

As of Wednesday afternoon, the mayors of Milwaukee, Madison, Racine and Kenosha confirmed to WPR they had received subpoenas.

The legal documents compel the mayors to appear in person before Gableman or other investigators in Brookfield on Oct. 22 to provide "evidence and testimony with regard to the November 2020 General Election in Wisconsin ... including but not limited to, potential irregularities and/or illegalities related to the Election." Regarding evidence, the subpoena compels the mayors to bring "all documents contained in your files and/or in your custody possession, or control, pertaining to the Election."

According to the subpoenas, failure to comply could result in criminal penalties, including imprisonment.

Speaking at a press conference in Madison on Wednesday afternoon, Madison Mayor Satya Rhodes-Conway called the subpoena "a mockery."

"This constant rehashing of the 2020 election is not only demoralizing for our clerks, it is corrosive to our democracy," Rhodes-Conway said. "There is no wrongdoing to investigate that justifies subpoenas and interrogations.”

However, Rhodes-Conway said she would appear to provide the in-person testimony, as requested in the subpoena, and argued for the testimony to be open to the press and public.

"These issues should never be discussed behind closed doors in a strip mall, they should be discussed openly and in front of the public and the media," she said.

She said providing the requested documents, which she described as "hundreds of thousands of pages" may be challenging, particularly under the specified timeline.

In a prepared statement, Milwaukee Mayor Tom Barrett said his office has "been open and transparent about the administration of elections in Milwaukee and, following consultation with the City Attorney’s Office, will provide an appropriate answer to the (request)."

In a separate prepared statement, Kenosha Mayor John Antaramian called the subpoena "a colossal waste of time and money for the city of Kenosha." Antaramian's statement didn't say whether he would comply with the request.

The new subpoenas are the latest issued in the ongoing investigation. Last week, subpoenas were issued to election officials across the state, as well as the Wisconsin Elections Commission. In September, Gableman released a video saying he would issue such subpoenas, if necessary.

Speaking before the Green Bay Common Council on Tuesday, Gableman said he didn’t want mayors to consider his inquiry "an adversarial process."

Gableman, who visited a controversial election review in Arizona this summer, said the investigation isn’t looking to "restore former President Trump to the White House."

"If that’s the program, no one has shared it with me, nor would I have accepted this job," he said.

In response to questions from council members, Gableman said he planned to look into concerns about election administration guidance from the state Elections Commission to clerks, the Center for Tech and Civic Life grants and voting machines.

He also said an Oct. 31 deadline for the investigation previously set by the Legislature, which approved the inquiry, is not realistic.

There is another ongoing election inquiry, also called by the Legislature, being conducted by the nonpartisan Legislative Audit Bureau. That investigation is expected to be complete this fall.

The efforts come after Wisconsin has completed a series of routine state election audits and a presidential recount in the state’s two largest counties. None of those reviews have uncovered widespread fraud or wrongdoing. There have also been numerous Republican-backed lawsuits in the state, all of which have failed to result in findings of wrongdoing by election officials or voters.