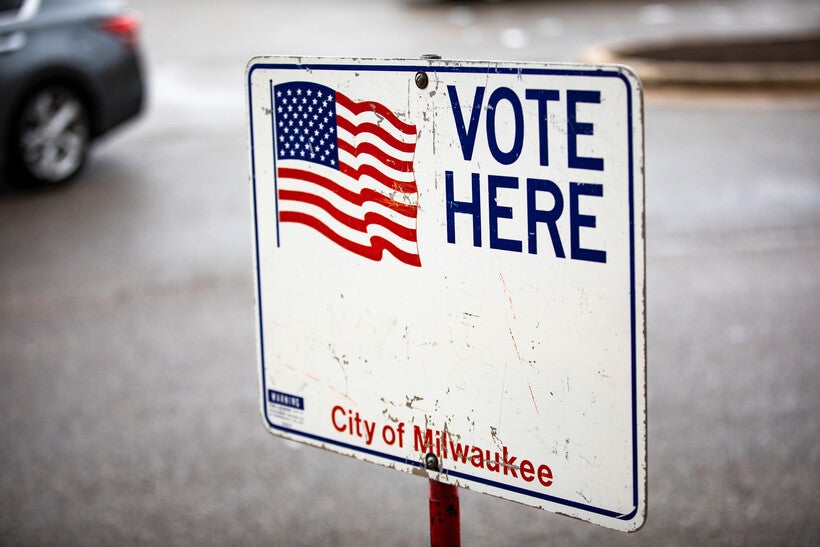 This sign directs voters to an early voting location at Midtown Shopping Center in Milwaukee on Oct. 28, 2018. Emily Hamer/Wisconsin Watch

More Than 1.3 Million Absentee Ballots Have Been Returned In Wisconsin So Far
By Corrinne Hess
Share:

Voters in Wisconsin have flocked to the polls despite the coronavirus pandemic.

As of Monday morning, more than 1.3 million absentee ballots have been returned, including early voting ballots cast since Tuesday, the start of early voting, according to the state Elections Commission. Wisconsin has already broken records for absentee and early voting records in a presidential race.

Now, the Democratic mayors of Wisconsin’s five largest cities are issuing a challenge to voters, and each other, with just eight days before the presidential election Nov. 3.

Mayors Cory Mason of Racine, John Antaramian of Kenosha, Tom Barrett of Milwaukee, Eric Genrich of Green Bay, and Satya Rhodes-Conway, of Madison, are competing against one another to see who can get the most absentee and early voters.

It’s one way to keep the polls safe, secure and healthy on Election Day, the mayors said during a joint press conference Monday.

As of right now, about one-third of registered voters in Racine and Green Bay have returned their ballots by mail or voted early, Mason said.

"We’re all making efforts to make sure people can vote and can vote safely," Mason said. "We’re excited to see who wins, and I think we’re all a little bit competitive and excited to see which city will have the highest amount of participation."

Rhodes-Conway invited all cities across the state to challenge voters to get to the polls before Election Day.

"I would challenge any mayor in the state of Wisconsin to join us in this friendly competition," Rhodes-Conway said.

The push for absentee voting comes as Wisconsin’s COVID-19 cases continue to climb. On Monday, the state reached more than 200,000 cases of COVID-19 since the start of the pandemic, according to the state Department of Health Services. About 25 percent of the people tested for COVID-19 in the past week tested positive for the disease, according to DHS.

In 2016, the presidential race was decided by 22,000 votes in Wisconsin. The voter turnout in Milwaukee dropped by about twice that — nearly 40,000 votes — from the 2012 to the 2016 election. That’s why there has been so much focus on Wisconsin by both Democrats and Republicans, even with the pandemic spiking.

In Milwaukee, dozens of get-out-the-vote events have been held in recent days, including events hosted by Souls to the Polls, the Milwaukee Area Service and Hospitality Workers Organization, and Black Voices for Trump. All have been in-person.

All five cities have added drop boxes across their communities so people can vote without coming into contact with other people. Drive-thru polling places have also been established.

In Milwaukee, the city has spent $250,000 on plexiglass to protect its poll workers and the public. Barrett said a $1 million grant was used to purchase 10 high-speed tabulators to help count the absentee ballots on Election Day.

Wisconsin is one of the few states where absentee and early ballots cannot be counted until 7 a.m. Nov. 3.

"We’ve created a marriage between our health department and our election commission," Barrett said. "We want to have an election that is filled with integrity, we’re committed to that, but we also want this to be the safest election we can have from a health perspective."