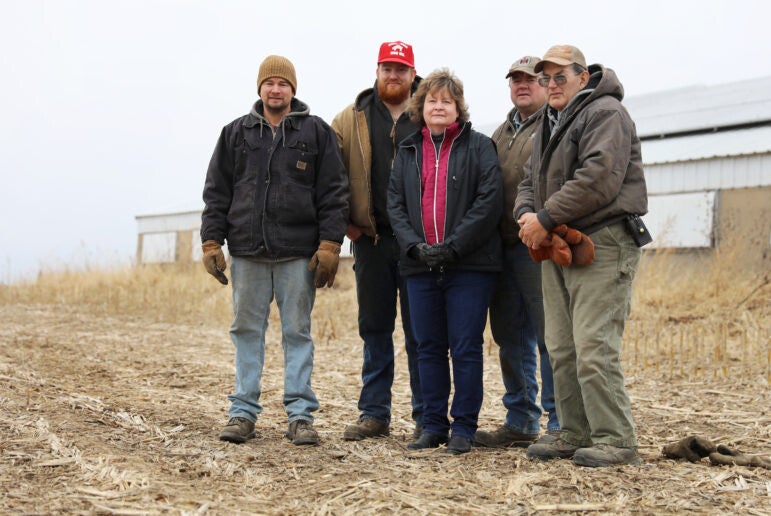 From left, Aaron Bishop, Andrew Bishop, Linda Bishop, Bob Bishop and Brad Bishop are the joint owners of C.R. Bishop & Sons, Inc., a family farm in Cobb, Wis. The Bishops are pictured on Jan. 18, 2019, in front of a cattle building, which is topped by solar panels that were installed in 2016. The Bishop family plans to lease about 650 acres of agricultural land for Invenergy’s Badger Hollow Solar Farm, one of the largest solar utility projects planned for cropland anywhere in the country. Coburn Dukehart/Wisconsin Center for Investigative Journalism

Badger Hollow Solar Farm Would Be Largest Such Project In The Midwest
By Sarah Whites-Koditschek
Share:

Bob Bishop is a 61-year-old farmer living in dairy country in southwestern Wisconsin. Today he is helping his two sons pull a downed tree off of a fence line, stepping through piles of cow manure and corn stalks as he drags the branches into the big claw of a skid loader.

Soon, the family will stop raising dairy cows because the industry is in trouble. In 2018, Wisconsin lost 638 dairy farms because of falling milk prices. And the Bishops, who farm in Iowa County, still carry debt from when hog prices tanked in the 1990s.

Yet a rare opportunity has come the Bishops’ way. For at least a generation, the family would receive double or more the market rental rate on about 650 acres to be used for a giant solar power project. The Badger Hollow Solar Farm would be the largest such project in the Midwest.

"This was a good answer for the lagging ag economy ... This provides us an excellent looking future, a very bright future we’ll say," Bishop said.

His son Andrew, 29, wants to raise a family here and have something to pass along. Renting out about one-third of their land for the project, most of it now used to grow corn and soybeans, will help the farm stay in business, Andrew Bishop says.

"I’d like my kids to take over running my farm someday," he said. "I have to have the financial future in front of them to make it viable." 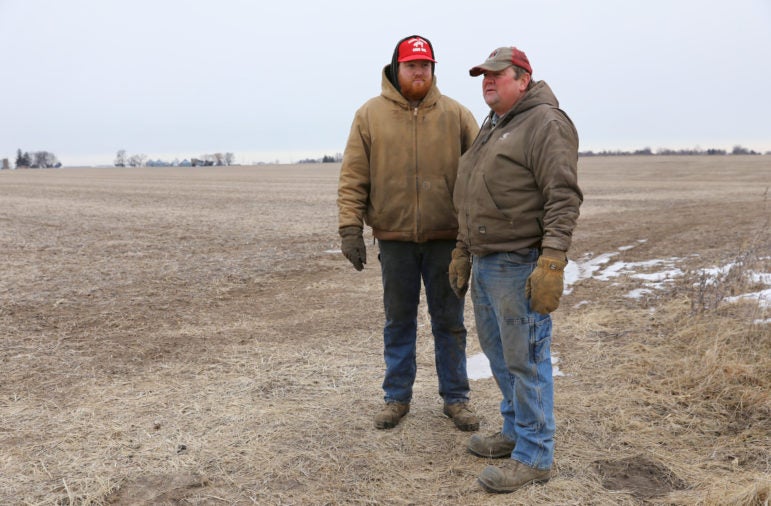 From left, Andrew Bishop and Bob Bishop stand on land owned by their family in Cobb, Wis. The Bishop family plans to lease about 650 acres of agricultural land for Invenergy’s Badger Hollow Solar Farm. They say the income will allow their farm to stay in business. Photo taken Jan. 18, 2019. Coburn Dukehart/Wisconsin Center for Investigative Journalism

Invenergy’s Badger Hollow Solar Farm is one of the largest solar utility projects planned for cropland anywhere in the country. Most large-scale solar arrays have been built in the desert Southwest, where both land and sun are plentiful.

Here in Wisconsin, the 300-megawatt project, which the company says could power about 77,000 homes, is envisioned for 3,500 acres of prime agricultural land. It is dividing the area’s farming community, pitting neighbor against neighbor in this county of about 24,000 people. The Bishops are among several local farmers who plan to lease a checkerboard of parcels between Cobb and Montfort to Invenergy.

Some residents who vocally oppose the project generally support renewable energy; some of them even have their own solar panels generating power for their rural homes. But because of the size of the project — nearly 5½ square miles — they fear the area will become a "solar wasteland." 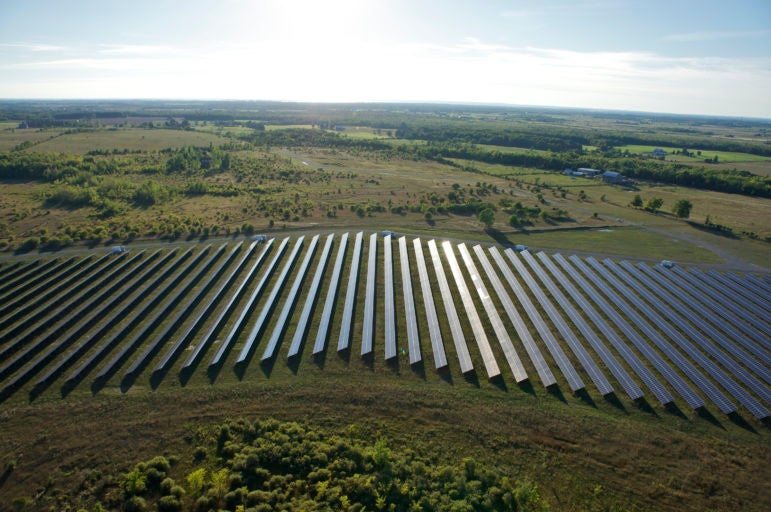 Replacing Corn And Soy With Sun

Invenergy is based in Illinois and has 135 wind, solar and natural gas projects around the United States, Europe, South America and Canada, with proposals to build elsewhere.

Badger Hollow is slated for completion in 2023, pending approval by the Wisconsin Public Service Commission. It plans to use 2,200 acres of the site for up to 1.2 million solar panels.

The company was attracted to Iowa County because of the availability of flat, cleared lands, nearby transmission lines, low environmental risk and community support.

And the project would help Wisconsin — which is heavily reliant on coal and behind most states in solar power generation — to shift to cleaner energy.

Wisconsin Public Service Corp. and Madison Gas & Electric plan to purchase interests equivalent to half of the plant’s generating capacity. Public utilities cannot easily build such a project themselves. State law requires them to show a need for such development, whereas private companies are not obligated to meet this standard.

As the sun sets over recently harvested fields, Litchfield walks near a sample of the native grasses that would be used as ground cover. The plants would help replenish soils and provide habitat for birds and insects such as bees, around the solar panels.

The panels will face east in the morning and tilt throughout the day to catch the most sun. They will transfer power to machines called inverters. Underground power collection lines will carry the energy to an overhead line, which will send it to the power grid.

Litchfield points to a property on the horizon, about 4 miles from the Badger Hollow project office, where he hopes to place rows of dark glossy solar panels, 15-feet tall, in a spot where rows of corn and soybeans normally stand.

Litchfield says the project will be visually unobtrusive, and the farm’s inverters would make only a low humming noise.

"As far as energy generation technologies go, I think it’s as low impact as it gets," he said. "We’re not burning anything, we’re not stockpiling ash, we don’t create odors." 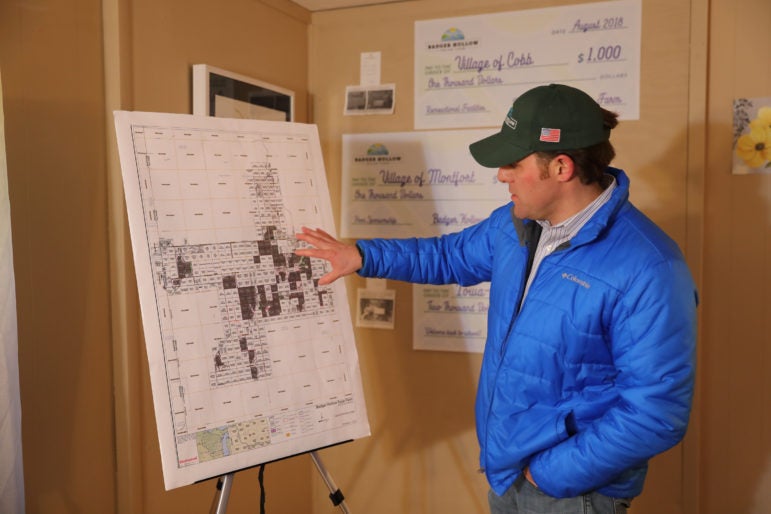 Invenergy's renewable energy manager, Dan Litchfield, shows the patches of farmland that would be turned into the Badger Hollow Solar Farm at the company’s office in Cobb, Wis., on Dec. 18, 2018. The panels would become part of a 3,500-acre installation in Iowa County if the project is approved. It would be one of the largest solar farms on cropland in the nation. Emily Hamer/Wisconsin Center for Investigative Journalism

'Ugly, Ugly Mark On The Land'

Both men are farmers who trace their heritage in this area back generations. Jinkins says his family purchased farmland before Wisconsin became a state in 1848, and his son hopes to become a fifth-generation farmer.

Jewell and Jinkins both have family land next to acres leased for the solar project. They have joined the formal process at the Public Service Commission to intervene in the Badger Hollow case.

They love this countryside for its scenic beauty and feel the solar project would change that.

"This is an ugly, ugly mark on the land," Jewell said. "Why am I having to have this thrust upon me?" 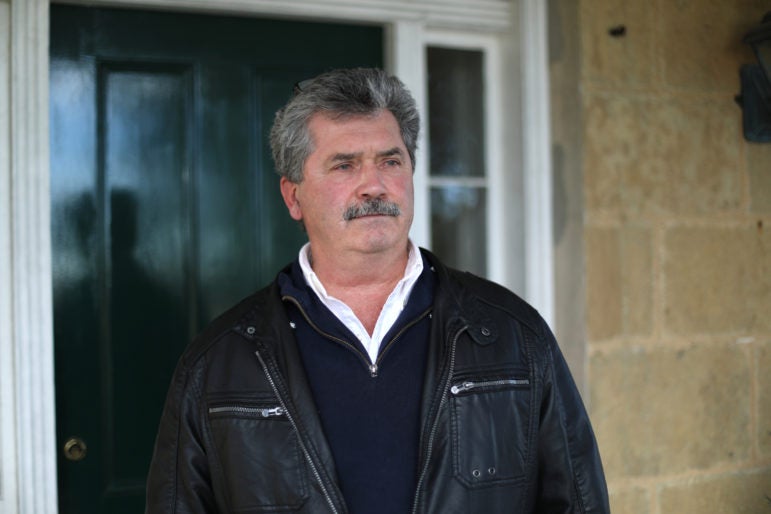 Alan Jewell is seen outside his home near Dodgeville, Wis. on Dec. 18, 2018. Emily Hamer/Wisconsin Center for Investigative Journalism. 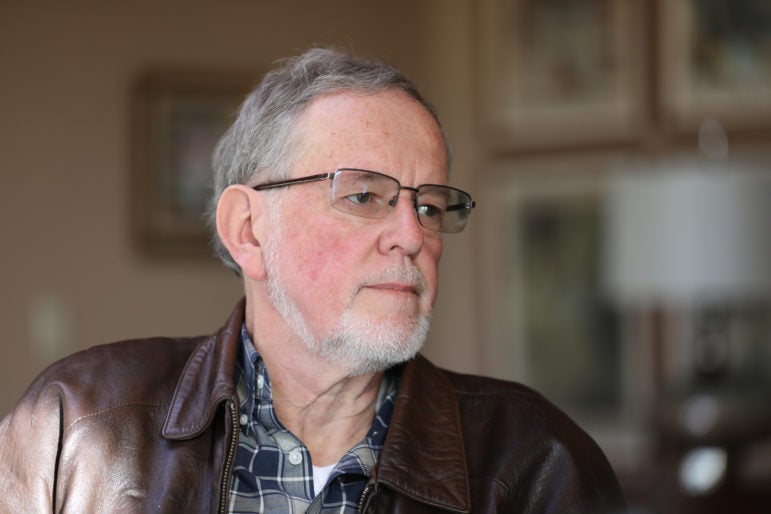 They say too much high-quality farmland needed for food production would be tied up in energy generation, and they fear more of their neighbors will move away because of the project’s unsightliness.

To Jinkins, utility-scale solar is a threat to Wisconsin’s farming legacy.

"If I want to rent land, if my son wants to farm, there’s just so much farm near our property, right? It doesn’t turn over that often. It doesn’t come up for sale," Jinkins said.

Jewell said he is for renewable energy, but he thinks it should happen on an individual scale. People like him, who are not a part of the project, will live with the downsides but no benefit, he says. Jewell and Jinkins are also among residents critical of the proposed Cardinal-Hickory Creek power line planned to run near the solar project.

Wisconsin has no siting rules specific to solar projects. And Jewell says the proposed local restrictions for the project are inadequate. An operating contract with Iowa County requires 50 feet between the project and property lines of non-participating owners or any public road. It also requires a 100-foot setback from any dwelling of a non-participating property owner.

Jewell’s attorney, Carol Overland, requested the Public Service Commission create solar siting rules that would include a required environmental review of large solar projects. After opting to conduct an initial environmental assessment, commission staff concluded that there would be a low probability of harm.

"The proposed project is not expected to significantly affect historic resources, scenic or recreational resources, threatened or endangered species, or ecologically important areas," the assessment found.

Content said the commission should conduct a "more holistic and thorough review" of whether these projects are needed — and how much ratepayers should be required to pay for them. The utilities say acquisition of this solar capacity would lower rates. An expert for CUB, which intervenes in utility cases to protect ratepayers, says it is possible the cost of electricity could go up.

"We’ve had a concern that utility profits in Wisconsin have been too high for a long time," he said, noting that Wisconsin has the 13th highest electric rates in the country. "Any time you build something, rates go up."

Jewell says he also wants more oversight, someone to further weigh the tradeoffs of such an unprecedented use of agricultural land for a solar utility.

"To an accountant, it’s dirt," Jewell said. "To somebody that works with land and feels it’s a partnership ... it’s not an element to buy or sell, it’s an element to respect."

Michael Vickerman, policy director of the nonprofit Renew Wisconsin, which promotes renewable energy, says solar power has been slow to catch on here.

He hopes 2019 will be a "breakout" year for solar. In the unlikely scenario that all 15 of Wisconsin’s proposed solar projects are approved, along with several proposed wind projects, renewable energy would provide about 20 percent of the state’s power by 2025, Vickerman says.

As of October, renewable energy, including hydroelectric, provided about 8 percent of the state’s utility-scale electricity generation, according to the U.S. Energy Information Administration. 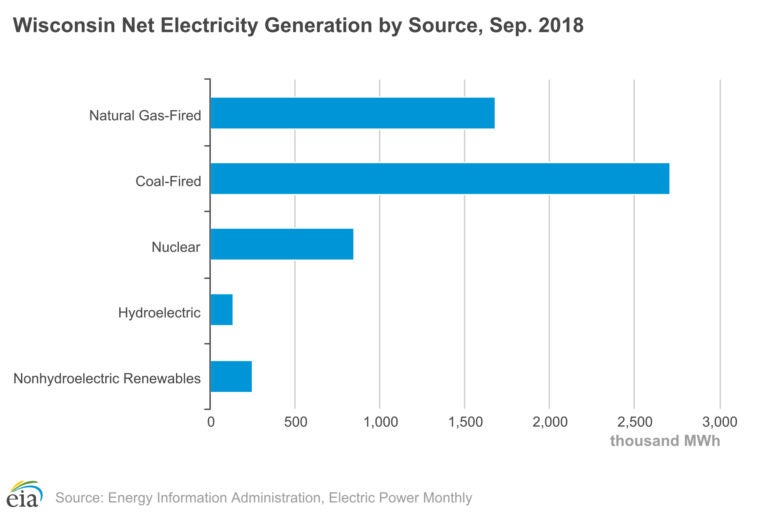 Coal-fired plants produced 51 percent of Wisconsin’s electricity, followed by natural gas at 29 percent, nuclear power at 11 percent, and other sources.

According to the Solar Energy Industries Association, Wisconsin ranks 40th nationwide in the generation of solar energy. Currently, the state has about 100 megawatts of solar power generation. The proposed Badger Hollow project would provide three times that amount.

Solar power has finally become a low-cost option for replacing fossil fuels, Vickerman says; that is why large utilities are now investing in it.

"Solar is homegrown. Solar is clean. Solar is dependable, and solar is economic," Vickerman said. "When you add all those characteristics together, you have a pretty compelling argument for expanding our use of solar." 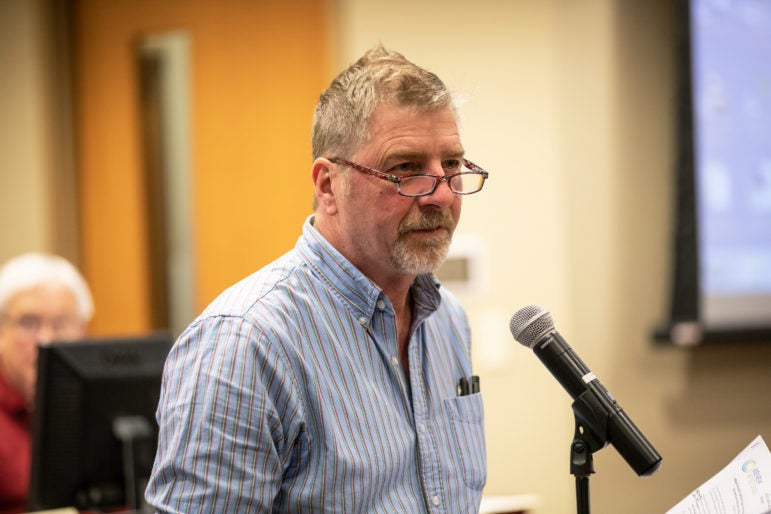 The Public Service Commission has scheduled March 6 oral arguments on whether the utilities should be allowed to purchase the extra solar capacity by investing $389.7 million in Badger Hollow and Two Creeks.

"We embrace solar from a large installation in rural Wisconsin to rooftop solar, whether it’s a big box store or somebody’s house — we think it’s all good," Vickerman said.