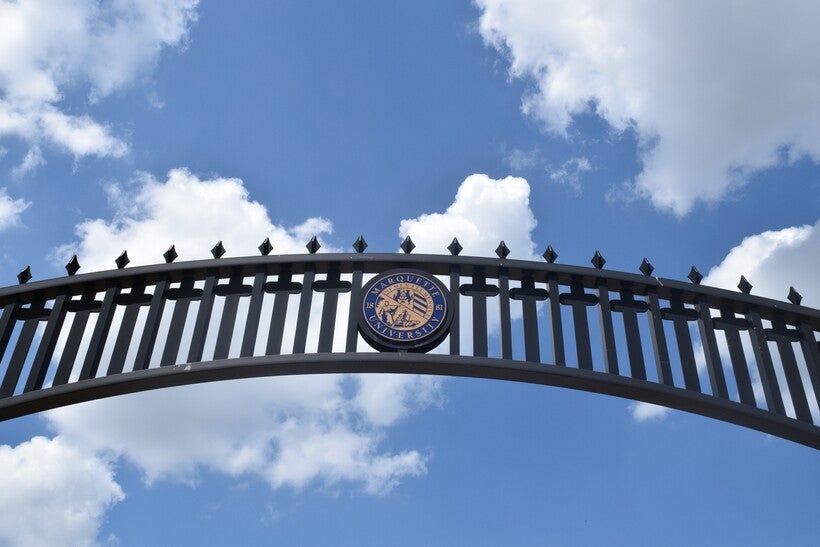 Marquette University Laid Off 39 In January. Staff And Students Fear More Cuts Are To Come

Marquette University laid off 39 staff members last month as part of a yearlong effort to close a $45 million budget deficit brought on by COVID-19 financial losses including a drop in enrollment.

The budget-cutting process has sparked fear on campus among some students and faculty who worry the university is moving away from its liberal arts education and Jesuit mission.

On Sept. 28, Marquette administrators held a virtual town hall to discuss the financial state of the university. Senior Vice President and COO Joel Pogodzinski shared sobering news: university administration is expecting upwards of 300 faculty and staff reductions in the next two years.

Marquette's 2020 freshman class was the smallest it has been since 1997, which — along with unexpected losses from the pandemic — meant there was an immediate budget deficit of $45 million. By 2024, Pogodzinski anticipates that deficit could grow to as much as $65 million. 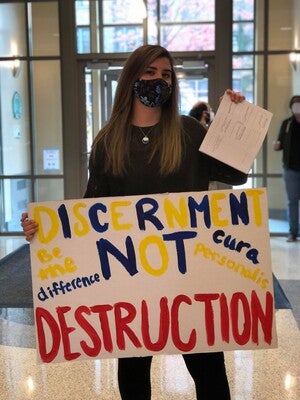 The faculty and staff reductions cited by Pogodzinski sent shock waves through the campus community.

In October, then-student Brooke McArdle organized a student sit-in to protest staff cuts. She recently told WPR there was an expectation that humanities programs would bear the brunt of the cuts.

"In the past, Marquette has made it very clear that they want to start shifting towards focusing on STEM programs like nursing, engineering and even business, and that they were already kind of desiring to gut the humanities," said McArdle.

McArdle, who graduated in December, received two student conduct violations tied to the sit in. She appealed and they were eventually dropped.

In December, the Marquette University Board of Trustees released its 2022 budget. It reiterated "headcount reductions" of 225 faculty and staff, which would save the university $34.2 million dollars in salary and benefits. At the same time, the document noted there would be 19 new positions created, a majority of which would be in health sciences, nursing and other areas of "strategic growth." The university would also carry a $12.1 million budget surplus that would be invested in unnamed areas of "strategic priorities."

On Jan. 22, Marquette University President Michael Lovell announced that 39 staff members had been laid off while thanking members of campus workgroups that had found other savings through reductions in discretionary spending, a buyout policy for tenured faculty, temporary early retirement incentives for staff, evaluations of unfilled positions and funding some employee positions with the university's endowment, which was valued at $698 million in 2019.

Days later, around 30 members of the campus community rallied outside the Marquette administration building to protest the layoffs.

"They're bragging about it being just 39 cuts at this point," French professor Sarah Gendron told WPR. "Will there be more? Absolutely."

Gendron said there's an expectation that after staff cuts, Marquette administrators will move on to faculty members who don't have tenure protections. Then, Gendron said, they'll turn to tenured faculty, who are more difficult to fire unless the programs they work for are eliminated. 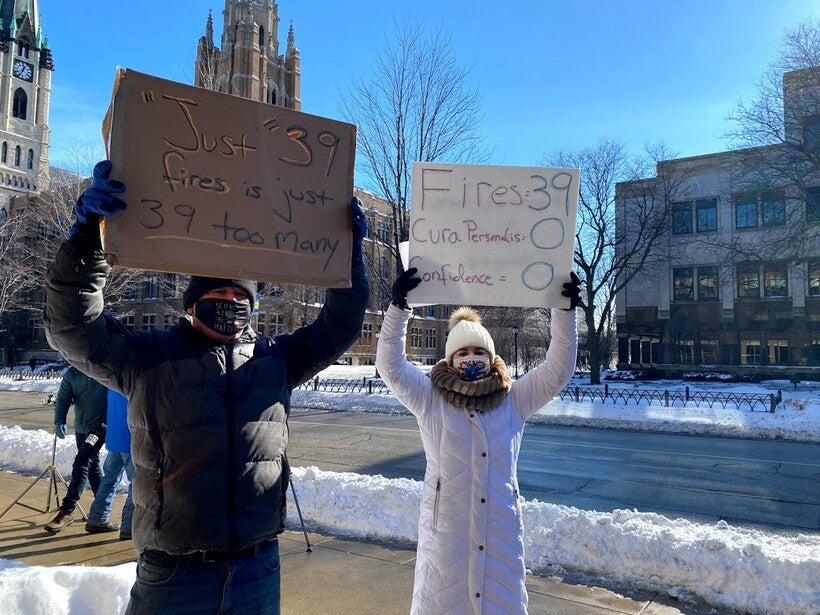 French professor Sarah Gendron, right, and her husband, Bill Bristoll, joined around 30 members of the campus community to protest the layoff of 39 staff members in January. Corrinne Hess/WPR

Marquette communications staff said administrators would not be available for interviews regarding the layoffs and the cuts outlined in the budget. WPR requested access to recorded listening sessions with members of campus budget work groups but communications staff did not grant it.

In a recent email, campus spokesperson Lynn Griffith told WPR that the spending reductions had closed the budget gap that led to the 225 faculty and staff cuts outlined in the December budget.

"The actions that were recently taken were to address the FY 2022 budget and no additional layoffs are planned at this time," said Griffith.

A defining aspect of Marquette's identity is its Jesuit mission, which includes "the search for truth, the discovery and sharing of knowledge."

In a November open letter to administrators, the campus rector of the Jesuit community, Gregory O'Meara, noted that a "solid grounding in the humanities is indispensable" to that mission.

In an interview with WPR, Marquette Academic Senate Chair Sumana Chattopadhyay said cuts aside, she doesn't believe the university's Jesuit mission is in danger. In fact, she said a yearlong review by the Association of Jesuit Colleges and Universities affirmed the campus' Jesuit character.

Spanish professor Julia Paulk said while there may not be more layoffs, she expects Marquette to stop renewing teaching contracts for non-tenured instructors. She said faculty have been asked to teach more and larger class sizes next year.

"So, it is a question of semantics," said Paulk. "For the people not renewed, it will have the same effect as being fired."

Paulk and other instructors told WPR there's been a lack of transparency from administration. She said faculty members on budget reduction workgroups had to sign nondisclosure agreements to keep discussions secret.

Paulk said it's been confusing to hear that the 39 layoffs and other measures are the end of the current budget woes despite administrators previously saying as many as 300 employees could be cut.

"Not only are we not getting information, we're getting different narratives about what's happening," said Paulk. "And it's very frustrating because faculty wants a strong university. You know, we want Marquette to survive and do well. But it feels like we're sort of flying blind."

Chattopadhyay said the budget-cutting process has been stressful for employees, and that there has been some miscommunication between administration and campus employees about the layoffs, projected cuts in the budget and the campus carrying over the $12 million surplus.

"We did communicate to the leadership that, you know, maybe it had to be communicated in a better way so that people did not have that kind of anxiety or anger," said Chattopadhyay.

Nearly 70 percent of Marquette's revenue comes from tuition and room and board fees. That means any drop in enrollment has big impacts on the university's budget.

In fall of 2019, Marquette laid off two dozen staff members and announced it would leave positions vacant. In a letter to campus, President Lovell cited a book titled "Demographics and the Demand for Higher Education" written by economist Nathan Grawe, which projects college enrollment across the Midwest will decline by as much as 25 percent beginning in 2026.

During an informational hearing held by state lawmakers Feb. 9, Grawe said national and regional declines in births during the Great Recession is the major reason for his projections. And while Wisconsin is expected to see a slight increase in the number of high school graduates through the middle of the decade, things go downhill from there.

"And then we see a slide of something like 12 percent," said Grawe. "If we look just south of your border to Illinois, we see a much deeper slide."

According to projections from the Western Interstate Council on Higher Education, the number of high school graduates in Illinois could drop by 22 percent between now and 2037.

That's a big deal for Marquette, which recruits a majority of its undergraduate students from the neighboring state.

But faculty members like Sergio Gonzalez say Marquette hasn't tried hard enough to recruit other populations of students, namely those from fast growing Hispanic communities in Milwaukee and Chicago.

Gonzalez, Marquette's first Latinx studies professor, was hired in 2016 as part of an initiative to have Hispanic and Latino students make up 25 percent of its undergraduate student body 2026. Doing so would unlock additional federal aid for the university.

But Gonzalez said while some progress has been made, the goal now feels like an unfunded mandate. According to Marquette enrollment data, the university has increased the number of Hispanic undergrads from 10.6 percent in 2016 to 14.8 percent this fall.

While Hispanic populations are growing in the Midwest, Grawe told lawmakers last week he didn't think that growth could offset overall declines in enrollment.

Guha said including data about or related to race in computer models results in bias that could exclude promising potential students.

"There's a reason why we don't use variables that are highly correlated with race as predictors in any algorithm, because it's tantamount to using race itself," said Guha. "This is known as a bad proxy."

During the December senate meeting, Baworowsky also discussed how Marquette studies students' "willingness to pay" full price when determining who to enroll.

Marquette, like most private universities, offers discounted tuition for students from low-income families. That effectively lowers the campus's annual $49,970 tuition cost, which makes college more affordable to a broader range of students. But the discount also means less tuition revenue for the university.

Baworowsky told faculty members Marquette could enroll a class with only high-achieving students who qualify for Pell Grants, but it wouldn't be able to "make the budget."

"We need to balance this out to get more students in the lower academic tiers because those are the ones who pay a lot of money and allow us to support our diversity, first generation students, and very high need students," Baworowsky is quoted as saying.

Marquette senior and student government member Savannah Charles told WPR that without discounted tuition, through grants from the university, she wouldn't have been able to attend the campus she's grown to love.

"I personally am a first generation college student who has really benefited from institutional grants and financial aid at Marquette," said Charles. "And I would not have been able to attend Marquette without that support."

Charles said she understands the university is facing financial troubles, but she and other students are upset about the recent layoffs. And as a student senator representing the College of Arts and Sciences, she's aware that cuts have been made there.

"I guess I would say I'm concerned for the future of Marquette and what it really stands for. I think that that liberal arts component of Marquette really made my academic experience so great," said Charles.

Editor's note: This story has been updated to reflect the correct start date for Marquette University's fall semester.