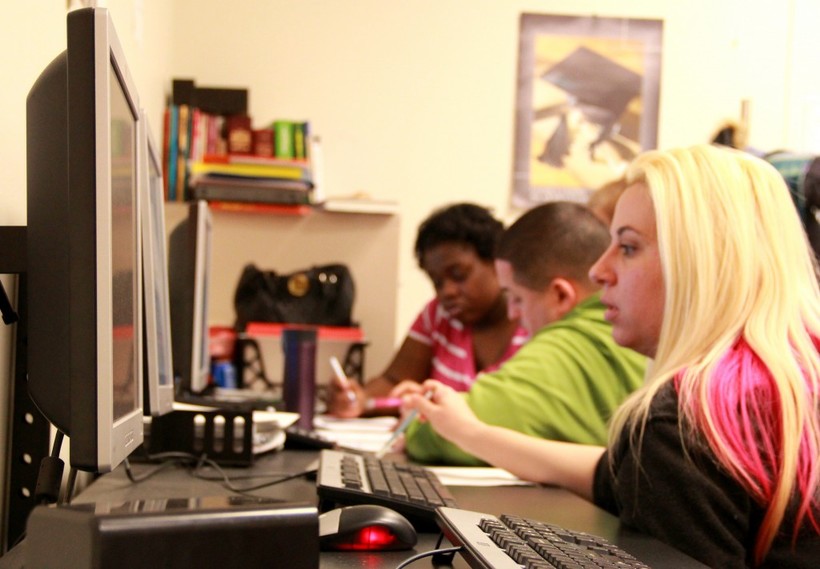 Many Hurdles Remain To Earn High School Diploma As Adult

ListenDownload
Find a literacy program near you

Most people complete high school the traditional way by earning a high school diploma. But for others, completing high school involves passing a GED, or General Educational Development, test. Passing the test isn't the first hurdle for many adults, however.

"People are very afraid because it’s something they have been hiding for a long time," said Jill Yeck, an instructor at Madison College who helps prepare students for high school equivalency tests. "Their confidence is really low and so they are afraid to make the first step."

In Yeck's Adult Basic Education classes, she teaches students reading, writing and math but also how to be in school.

"We teach how to organize things, how to be on time, how to be committed," explains Yeck. "There are all kinds of skills they may need to learn besides what the letters mean."

Often students can learn the sounds and the words but struggle with comprehension. Yeck said people really need to be committed to "get the gist of reading."

There are different paths to earning a GED. The standard test changed in 2014 to a computer-based test with a higher reading level and an emphasis on critical thinking. The previous test came in five sections. Students didn't have to pass all five at once, but could instead pass them one at a time. The test was very long and many people only passed after combining scores from multiple attempts. In Wisconsin more than 100,000 people earned a credential with the 2002 version of the test, more than 11,000 in the final year.

The new test requires students to complete 4 tests, language arts, social studies, science and math.  These tests can be taken one at a time. There are also practice tests, called GED Ready.  In Wisconsin the current pass rate is 71%; the national pass rate is 68%. Wisconsin's pass rate is likely to increase as GED Testing Service and Wisconsin recently accepted a lower cut score of 145.

Students in Wisconsin may take the tests one at a time and may retest on each subject area until they receive a passing score.  In addition, students receive a detailed score report that provides specific information on what areas to study to improve their performance.

But people in Wisconsin have another option, the 5.09 program, named for the administrative code that created it. The 5.09 program is a competency curriculum offered by a college, federal job corps center, community-based organization or the state Department of Corrections that meets the approval of the state superintendent of public instruction.

Madison College is among those institutions offering path to a high school equivalency. Students must commit to a year of coursework.

Wisconsin has six options available for adults to complete high school: two are GED test based. There are also the competency based option (5.09) mentioned by Madison College, a high school credit based option, a college credit based option, and one based on a foreign diploma.  Adults in Wisconsin are required to complete the orientation at an official testing center to find out which of the six options best meet their needs.

Yeck said she thinks it's a great option for many people.

There's also a benefit in being around other students working toward the same goal.

"They are not in it alone. There are other people like them," said Yeck. "And there are people that really want to help."