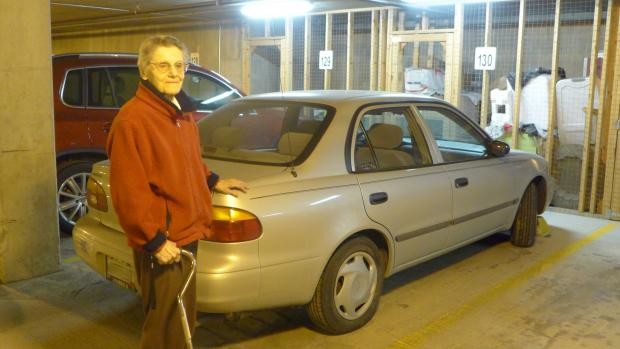 For Many Elderly People, With Age Comes Adjustments Behind The Wheel

18 Percent Of Drivers In Wisconsin Are Over Age Of 65
By Shamane Mills
Share:

Elizabeth Roberts leans on a cane in the carpeted hallway outside her apartment door. The 94-year-old fiddles with a ring of keys to find the one that will unlock what she calls home, a retirement complex located in a serene and shady grove of mature oak trees. As she does so, Roberts talks about getting old.

“What’s troublesome about getting older – it’s so much work because the things you do normally don't work as well, so you have to readjust,” said Roberts.

For instance, when she swims laps in the pool three times a week, the University of Wisconsin emeritus professor of physical education occasionally stops to rest during her workout.

Roberts is also one of about 18 percent of Wisconsin's 4 million drivers who are over age 65. She said she's made one adjustment when she drives: She no longer takes passengers.

“Because of my blind eye,” said Roberts. “That was the reason. I didn't want to. We have a volunteer driver service here.”

Although transportation is available at her retirement community, sometimes Roberts wants to drive herself so she voluntarily sought out a driving rehabilitation specialist after she didn't see a pedestrian attempting to cross the street.

“The reason I wanted to do this was because I was getting concerned about myself,” said Roberts. “I was beginning to wonder, 'How good was I?' And it was really it was very encouraging.”

Roberts passed both a written and road test.

“My report was, ‘good driver’ -- not super driver, but a good driver, with either one or no poor responses,” said Roberts.

The crash rate of older motorists is lower than other drivers, but driver deaths rise with age.

Percentage of Licensed Drivers in Wisconsin Who Were In a Crash in 2012. *Data from Wisconsin DOT.

Percentage of Licensed Drivers in Wisconsin Who Were In a Fatal Crash in 2012. Data from Wisconsin DOT.

*Found by dividing number of crashes in age group by number of licensed drivers. May include some drivers who crashed vehicle twice or more in a year.

“And there are a lot of children of elderly parents that are concerned,” said Steven Pazynski, a medical review supervisor for the staet Department of Motor Vehicles. “It's very difficult sometimes to talk to their parents, tell them to give them the keys and give up the vehicle.”

Elizabeth Roberts said her Geo Prizm is handy for going to a special bakery that makes gluten-free bread. It's located two miles away, on a busy four-lane road.

“I go there every Saturday when they bake,” said Roberts. “They bake on Tuesday and Saturday.”

Roberts considers herself a safe driver, although she did have a minor fender bender in a parking lot. Other drivers who get into more serious accidents can sometimes be reported to the Department of Motor Vehicles, which can take away a person's license.

Pazynski recalls the case of an 80-year-old woman.

“She got into a small accident, and the police officer wrote up a report,” said Pazynski. “She stated she was confused, didn't know where she was going. So then we contacted her and her physician. She does have progressive Alzheimer’s and although she thinks she drives perfectly and she thinks she's fine, she's not.“

That's the sometimes difficult job of the DMV: To determine who’s fit to drive, no matter what age.

Editor's Note: This is the sixth in a six-part series on aging and elder care in Wisconsin.