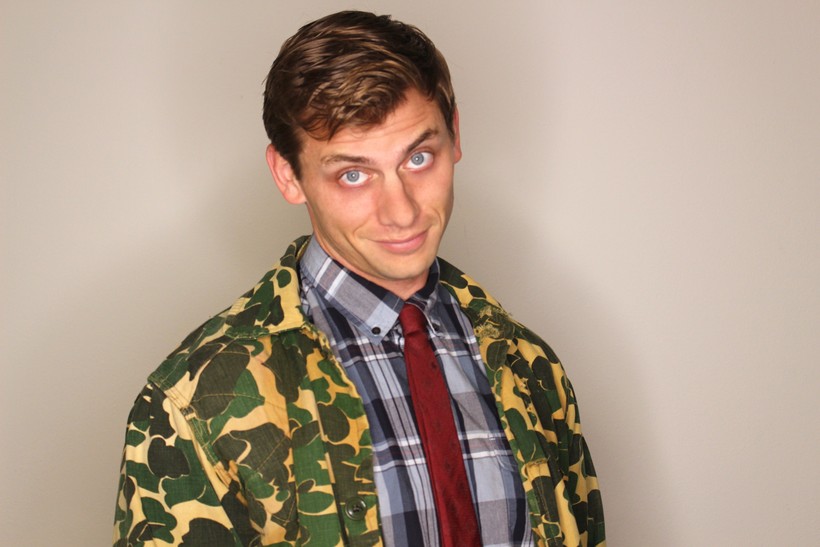 For the last six months, comedian Charlie Berens has been cranking out a weekly YouTube video featuring the top stories of the week.

The "Manitowoc Minute" features the Wisconsin native hamming up his accent while bringing viewers global, national and local headlines. He talks about everything from North Korea to net neutrality, from the Green Bay Packers to an escaped kangaroo in Kenosha.

Each fast-paced episode features the "Craigslist Kicker," showcasing the oddest finds on the classified ads website. The postings feature things like a used bottle of Tullamore Dew for sale or a wedding ring in exchange for hunting gear. Berens then rounds off each episode with a salute to Wisconsin troops.

But perhaps Berens’ signature is his wide range of catchphrases.

"A lot of those catch phrases were improvised," said Berens. "I wanted a signoff that would compete with Edward R. Murrow's 'Good night and good luck.' So, I tried a bunch of those, like 'Get da muskies...' something very thoughtful. And what I ended up going with was 'Go Packers and f--- da Bears.' So I hope Edward R. Murrow is turning over in his grave right now as I'm mentioning him in the same breath as the 'Manitowoc Minute.'"

The catchphrases have become so popular among fans, that some people are even getting the phrases tattooed on themselves. The less dedicated can always buy a T-shirt or a hat.

"Manitowoc Minute" has racked up hundreds of thousands of views on YouTube in the last six months. It’s so successful that Berens has taken the show on the road, selling out venues in Milwaukee and Manitowoc. He’s attracted well-known sponsors, like New Glarus and Granite Peak at Rib Mountain State Park.

Berens grew up in Elm Grove and New Berlin. He studied broadcast journalism at University of Wisconsin-Madison and now lives in Los Angeles, writing and producing comedy. He’s back in his home state often, since "Manitowoc Minute" duties have become full-time.

And timing has been everything for Berens.

A few years ago, he had the idea for something like "Manitowoc Minute," but he didn’t have the ability or confidence to create it. Fast-forward to 2017, where his formula really resonated with people.

"People say that they can enjoy the show whether they’re on the right or left," said Berens. "I think we're living in an age where people have been tweeting past each other for years and years. (They’re) writing one nasty Facebook comment after another, one you know nobody would ever say to another person's face. I think what this is trying to do is bring comedy that is saying something and does have a point of view."

Berens adds that he focuses on topics that everyone can agree upon.

"I think we can all agree that Charlottesville should have never happened in America, especially today. I think we can all agree the Bill Cosbys, the Harvey Weinsteins, whatever — that should not exist. We need to take care of the planet, the troops. I think these are things that should not be polarizing. Focus on those bridge issues and have fun with the absurdity."

Berens chooses the series’ stories based on topics he’s interested in or viewer submissions. And the stories aren’t always for pure entertainment. He often has a deeper reason for featuring a particular story.

"I remember one said that cows that eat a certain kind of seaweed produce an insane amount of less methane, said Berens. "I think that's really interesting since methane is one of the major contributors to climate change and Wisconsin's a huge dairy state. So I was making a joke about it ... saying they should eat what I catch when I go fishing, because it's mostly seaweed."

"But I kind of want to throw it out there and get people aware of it because maybe there's someone out there who thinks, 'Oh, I know a great way that we could mass produce seaweed in an environmentally friendly way,' and we could solve one of the major contributors to climate change."

Perhaps part of Berens’ success is due to Wisconsinites love of laughing at themselves.

"I grew up one of 12, and my family's big on making fun of each other in a nice way. It's the same way with Wisconsin," said Berens. "Maybe it's something about the cold, you learn not to take yourself too seriously. Wisconsin is an amazing state, but you can't deny the fact that as I was walking here, my face froze, it's like -7 or something."

Berens went on to later add, "I think at the heart of it, if I didn't love it, this would come across as disingenuous. But I love it. And I don't think anyone can really question that because it's one of my favorite places in the world."

Berens was a bit mum on future plans for "Manitowoc Minute."

Hear the full interview with Charlie Berens as he reflects on the year in news, what he really thinks of those fan tattoos, and the genesis of “Manitowoc Minute."