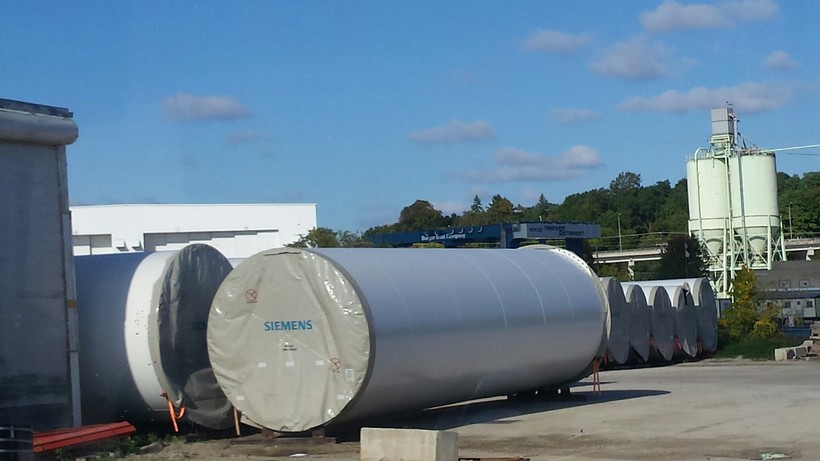 Renewable energy will be the focus of a forum Thursday in Madison that's being organized by the group RENEW Wisconsin. One of the renewables, wind power, hasn't seen much growth in the state during the last five years, and that concerns a major wind tower maker.

The manufacturer is Manitowoc-based Broadwind Energy, which makes 350 wind turbine towers each year.

At the company’s factory, large and thick sheets of steel are cut to shape. Some pieces are cut straight, others are tapered. The towers "are not perfect cylinders like  a can of soup,"  Broadwind's Senior Manager Dennis Janda recently told journalists on an energy tour with the Institute for Journalism and Natural Resources. Then, the steel is rolled and welded, and the sections are painted and partly assembled.

After final inspection, the sections are ready to be shipped by truck or barge, Janda said.

Almost all of Broadwind's towers are sent out of Wisconsin due to the near-halting of new wind farms since about the time Scott Walker became governor. According to the company, which employs 350 people in Manitowoc, it would like to sell more towers in the state, and they're not alone.

"From a market standpoint, a favorable bias in the state to embracing the wind energy market space would enhance the marketability of the supply chain," Murphy said.

It's not just the business sector that would like to see more wind energy in Wisconsin. So would some students.

Mark Pearson plans to graduate from Lakeshore in May, but said he's likely to go to another state where's there's more work.

"The wind industry now is growing quite a bit, so there are plenty of jobs out there. I just have to be willing to travel a lot more," Pearson said.

"I mean a good chunk of where they're looking at around the country and around the world are where there's a highest concentration of power," Walker said last week at a press conference in Milwaukee. "The same reason that you have more solar in places where it's sunnier for longer periods of the day and year, similarly would be the case with wind power."

"Right now, there’s not a need for a lot a new generation of any source in Wisconsin," Nowak said. "Whether it be wind, solar, coal or natural gas. The current fleets are doing well to serve the load that's necessary."

But some power companies are looking for cleaner sources of energy that don't require PSC approval. Dairyland Power plans to buy from a wind farm that may be constructed in southwest Wisconsin this year. The 49-turbine Quilt Block project is just under the 100-megawatt threshold that would trigger a state review. Dairyland CEO Barbara Nick is expected to talk about her firm's interest in renewables at Thursday's RENEW conference in Madison.