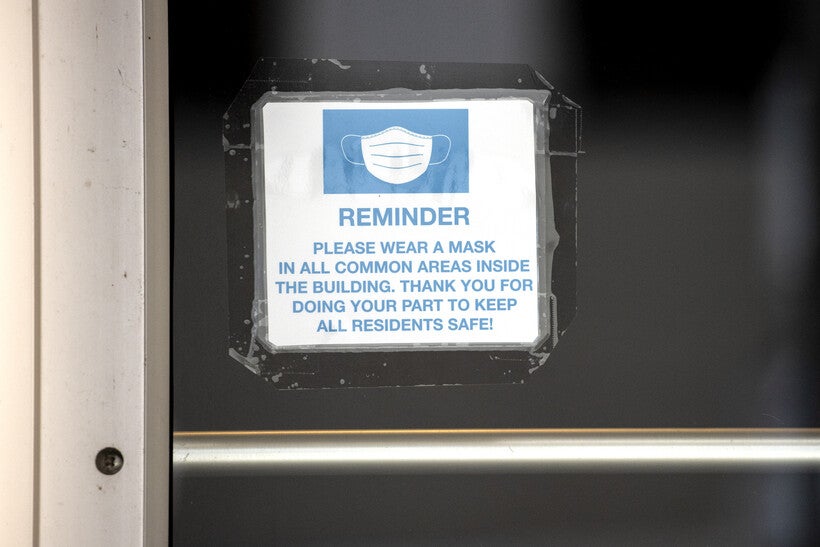 A sign instructs Madison residents to wear a face mask to prevent the spread of COVID-19 on Tuesday, Feb. 23, 2021, in Madison, Wis. Angela Major/WPR

While students and employees won't be required to wear masks indoors, some campuses strongly recommending they continue to do so
By Rich Kremer
Share:

University of Wisconsin-Madison instructors will be able to recommend their students continue wearing face masks after a campus mask mandate expires March 12. But despite concerns about immunocompromised or otherwise at-risk staff, faculty are being told to masking will now come down to personal choice.

During a UW-Madison virtual forum Thursday, featuring campus public health officials and a vice provost, Dr. Devlin Cole of the UW-Madison School of Medicine and Public Health, told attendees students and staff can feel safe and protected against COVID-19 despite masks becoming optional.

She said that's due to more than 95 percent of students and more than 96 percent of employees being fully vaccinated. She said many in the campus community have also gotten boosters, and she said there is a lot of natural immunity at the university because "we've recently had a lot of people who were sick and recovered."

"So, right now, on the epidemiologic curve, is the right time to start using less of the tools in our toolbox that we have," Cole said. "So: one, we have more tools if we need to use them later; but two, because we want to start getting used to what it's going to feel like to get kind of, I hate to use the words 'back to normal,' but forging a new normal as we go ahead."

"And so extending our current expectation to March 12th allows that additional time for people to adjust to the changes and get comfortable with that," Baggott said.

For the past year, most UW System campuses have been operating under temporary mask mandates issued by chancellors. Those have typically been renewed every 30 days.

On Feb. 16, UW System interim President Tommy Thompson announced he was working with chancellors to begin removing mask mandates "with the intent to withdraw them as soon as March 1 and no later than spring break," according to a system press release.

"Wisconsin has one of the fastest rates of coronavirus decline in the country," Thompson said in the February release. "While we will continue to take prudent prevention measures when warranted, restrictions can be lifted as case counts drop. Further, vaccinations and boosters are readily available to combat the virus that is much less severe for people who take this individual responsibility to protect themselves and others."

The theme of individual responsibility was repeated during the UW-Madison forum.

A question submitted by an instructor asked if instructors and even teaching assistants can enforce a mask policy in class or move classes online if they're uncomfortable being around unmasked students.

John Zumbrunnen, UW-Madison vice provost for the Division of Teaching and Learning, reiterated that the campus policy was that masking will be up to individuals after March 12.

Instructors will be allowed to recommend students wear masks, Zumbrunnen said, noting his office has sent out sample language for instructors to use to do so. But he said instructors need to "recognize the power dynamic in the classroom and emphasize to students it is their individual decision and that there won't be consequences for them for that decision."

Some students and faculty at UW-Madison weren't pleased to hear the campus with well over 40,000 students would be dropping its mask mandate. The campus student government group, Associated Students of Madison, issued a Feb. 16 press release stating administrators ignored student opinions discussed in meetings of the COVID-19 Student Advisory Board.

"Some students may be ready to ditch their uncomfortable masks regardless of CDC guidelines," the Associated Students of Madison statement reads. "However, campus policy decisions must also account for our most vulnerable students and staff. Many valued members of our campus community have health conditions preventing them from safely engaging with in-person academics, especially if masks are not present."

A tweet Friday from a UW-Madison English Department graduate student Miranda Alksnis, claims the university's English department voted to request an extension to the campus mask mandate and quoted the document by saying the department "is dismayed" Thompson and UW-Madison Chancellor Rebecca Blank ended the mask mandate.

Wisconsin Public Radio asked the department chair for a copy of the letter mentioned in Alksnis' tweet, but it was not provided.

Other UW System campuses have begun issuing statements about lifting their own mask mandates.

On Tuesday, UW-Milwaukee announced it would drop masks March 19.

"While UWM is eliminating the mask requirement in campus buildings, we will continue to strongly recommend, in accordance with CDC guidance, that students, employees and visitors wear masks when inside public spaces on campuses," said the statement.

UW-La Crosse also announced face masks will no longer be required after March 11, though administrators say they will be "strongly encouraged" in classrooms.

"There will be a small number of exceptions where masking will continue to be required, including the Student Health Center, Campus Child Center, Counseling & Testing Center and our Cartwright vaccination and testing clinics," said the campus statement.