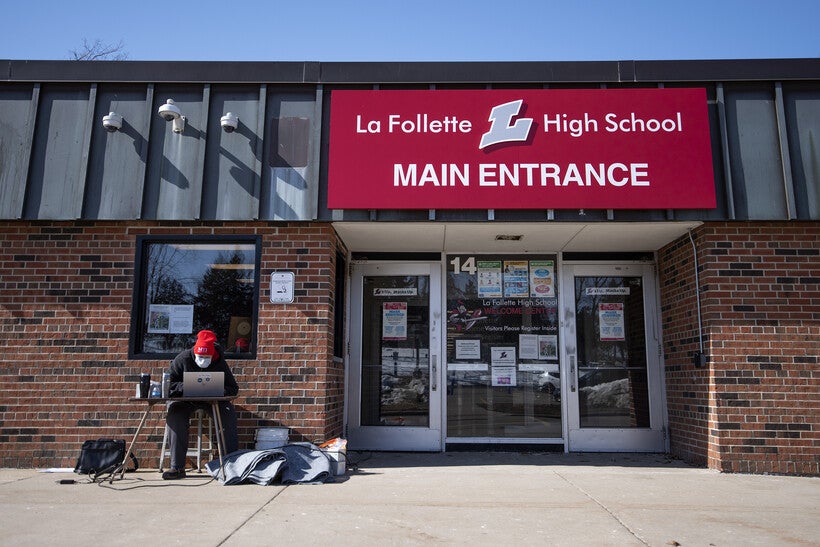 Teachers at La Follette High School taught virtually from outside the school building to bring attention to safety concerns about in-person teaching without first vaccinating teachers for COVID-19 on Thursday, March 4, 2021, in Madison, Wis. Angela Major/WPR

The Madison Metropolitan School District is planning on a more normal, in-person learning year for 2021-2022, but it's making a few adaptations to get there, officials said.

At a Friday media briefing, district officials answered questions about virtual learning, COVID-19 testing, bus schedules and a host of other changes and challenges for this school year.

Unlike last year, when the district started with all-virtual schooling, in-person learning will be the default this year.

District officials announced Thursday that they will open a virtual learning program to students in pre-kindergarten through fifth grade.

Previously, the virtual school, Madison Promise Academy, was only available to middle and high school students, with expansion to elementary students expected to be added in later years.

TJ McCray, MMSD's executive director of library and technical services, didn't have specifics on how many teachers will be hired to run the elementary virtual program, but said hiring is ongoing.

"What we do know is that we will have teachers that will be dedicated to just our virtual learners," he said.

"As superintendent, yes, I am recommending that we move forward with a mandate for vaccination," he said. "We know that the best path forward for our students, for our staff and for our community is to take the highest level of safety."

Michael Jones, president of Madison Teachers Inc, said a survey of the union's members found 85.5 percent were in favor of a vaccine mandate and an additional 10 percent wanted more information.

"I think that 10 percent can easily be moved to the 85.5 percent," said Jones. "We see vaccinations as an extremely important part of making sure our kids and families and staff are safe, and everyone's safe in the building.”

The Madison school district, like most of the state's larger school districts, is requiring universal masking in schools regardless of vaccination status.

Studies of school districts that used masks and social distancing, including one in Wisconsin Rapids, showed very low in-school COVID-19 spread with recommended precautions from the Centers for Disease Control and Prevention.

In addition, according to this year's CDC guidance for schools, proper masking can cut down on the need for quarantines, as well as their length.

Officials have also announced a shift to its school schedule that will last at least through December because of a national bus driver shortage.

To compensate, the district will be staggering start times to bring some students in early and send them home early so it can transport the same amount of students with fewer drivers.

Mick Howen, director of administrative services, said the district's 46 currently employed drivers are more than a dozen shy of what the schools need.

"To get back to what our intended bus route and pickup and drop-off times would be, we're estimating that we need 18 drivers," said Howen. "To get back to that point, we would prioritize the schools that are most impacted first in getting them back into the process that we have historically and intend to use moving forward."

The administration said staffing in other parts of the district was about on par with previous years. The district currently has about 138 openings, half for teachers and half for other support staff. MMSD is also hiring and recruiting for substitute teachers.

The district is participating in the state Department of Health Service's program for free, in-school testing and will use it to test symptomatic students and staff to determine if they have COVID-19.

Windy Smith, assistant director of health services, said testing sites will be set up in all MMSD schools.

At present, district officials said they are planning to keep testing to students who have symptoms consistent with COVID-19. They aren't planning to do surveillance testing or event-based testing.

"We are going to be nimble as we move forward with the pandemic, but right now, it is sticking with symptomatic testing," said Smith.

After a positive test, Smith said they will go through contact tracing and identify students and staff that need to quarantine.

Jenkins said there isn't currently a hard threshold where the district would need to pivot to entirely virtual learning, like many schools did last year. He said he thinks the district can avoid an in-person shutdown this time around.

"From what we know now, we can be in school, unless there's something that happens differently — because, you know, we're in the middle of a pandemic," said Jenkins. "At this point, with what we’re facing, we can continue to implement our mitigation strategies and remain safely in school."

School health centers will be tracking all positive cases of COVID-19 within the school, and information will be posted on the district's dashboard.

Dr. Greg DeMuri, a medical advisor for MMSD, said the district will also be reporting "secondary cases," or cases contracted within school, on the dashboard, but only at an aggregate level to protect students' privacy.

"Last year, we didn't see that, even in school districts that were open for most of the year," said DeMuri. "Secondary cases were actually quite unusual."

Students who are quarantining will be able to access classroom materials through the online SeeSaw platform. Marvin Pryor, MMSD's chief academic officer, said the plan isn't to have teachers teaching concurrently online and in person.

When one or just a few students from a class are quarantining, district officials said it will be up to the school, classroom, teacher and family to work out the best system to make sure they are still able to learn. If it becomes an entire class or school, Pryor said learning for that group would look more like MMSD's periods of all-virtual schooling last year.

"In the event that we would have to make that shift — and we hope we don't — but if we do, it would be a seamless transition, because they would continue to use the same program," said Pryor.