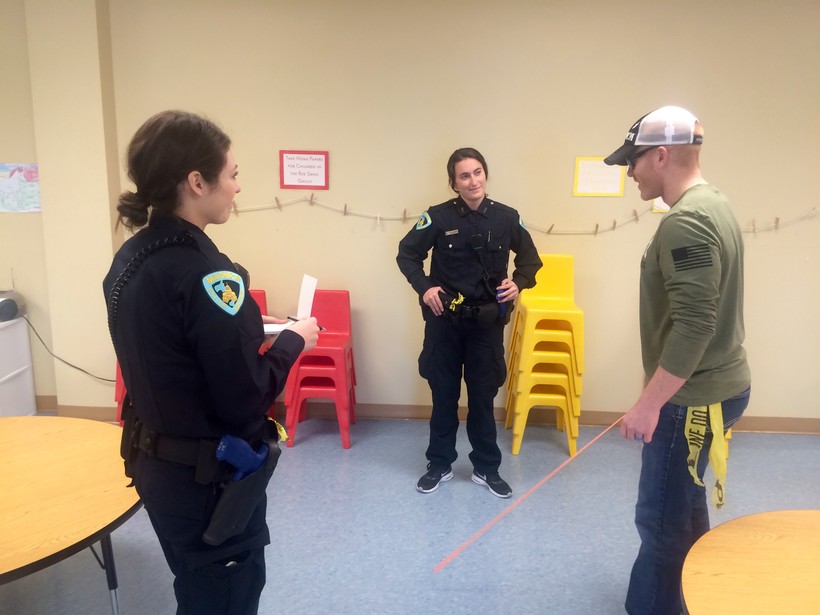 As part of their academy training, the Madison Police Department's current class of 23 recruits recently spent time learning what it’s like to experience certain symptoms of mental illness, and how best to respond to citizens in crisis.

The recruits' block of training on mental health included an activity called "Hearing Voices," facilitated by the Dane County chapter of the National Alliance on Mental Illness. It simulates auditory hallucinations that someone who has schizophrenia or is in psychosis may experience.

They plugged earbuds into red iPods and hit play. First they heard music, then they heard voices. Keeping the earbuds in, they completed a list of tasks including a word search and simple counting. Then, they took a verbal test with simple questions like "Who were the last four Presidents of the United States?"

Recruit Clare Gloede struggled to answer the questions because she was so distracted by the voices. She said she learned how difficult everyday tasks can be for people who have these symptoms.

"I experienced how hard it is, and now I don't share the experience, obviously it was just an exercise, but I have a better understanding of what it may be like to have that," she said. "I only had it for 10 minutes, so to have that for a lifetime would be very difficult."

That better sense of understanding is what NAMI Dane County executive director Lindsay Wallace said she hopes police recruits can learn from the experience.

"I think part of what we're trying to do is show more empathy and compassion, and the best way to do that is to have them go through similar situations of what would it be like if somebody was talking in your ear constantly," she said.

Wallace shared her personal story with the recruits, becoming emotional as she told them that she was hospitalized during a mental health crisis.

"I am very surprised law enforcement wasn't called when I went through that stage," she said. "And so I think it's important for them to know that their first interaction with somebody is likely to be at that crisis level, and you're not the best person you can be when you're in crisis."

Sarah Henrickson, a law enforcement liaison with Madison's Journey Mental Health Center, works within the MPD on crisis intervention and other mental health issues. She doesn’t expect an officer to have the same level of expertise as a mental health clinician, she said.

"Just like I don't think we should expect our social workers to be tactically trained to disarm people from weapons, I don't think we should expect our police officers to be psychologists or clinical social workers or things like that," she said. "There has to be a balance of kind of how much we can expect people, professionals to have expertise across so many large areas."

The key, Henrickson said, is collaboration between mental health professionals and law enforcement.

In 2015, the MPD designated five people as full-time mental health officers. Instead of being out on patrol, they focus specifically on cases where mental health issues are involved. One of those officers, Andy Naylor, said a big part of his job is connecting people to the resources they need. For someone experiencing a mental health crisis, he said, that could keep a potentially violent police interaction peaceful.

"I don't consider myself a mental health expert per se, in the sense that I don't diagnose people," he said. "I don't prescribe medication, that kind of thing. But I know who does."

This story is part of an ongoing WPR News series looking at people who are beginning their law enforcement careers. Reporter Bridgit Bowden is spending a few months following a class of recruits through the Madison Police Department Training Academy. The stories can be heard on "Morning Edition," the Ideas Network and online at wpr.org.